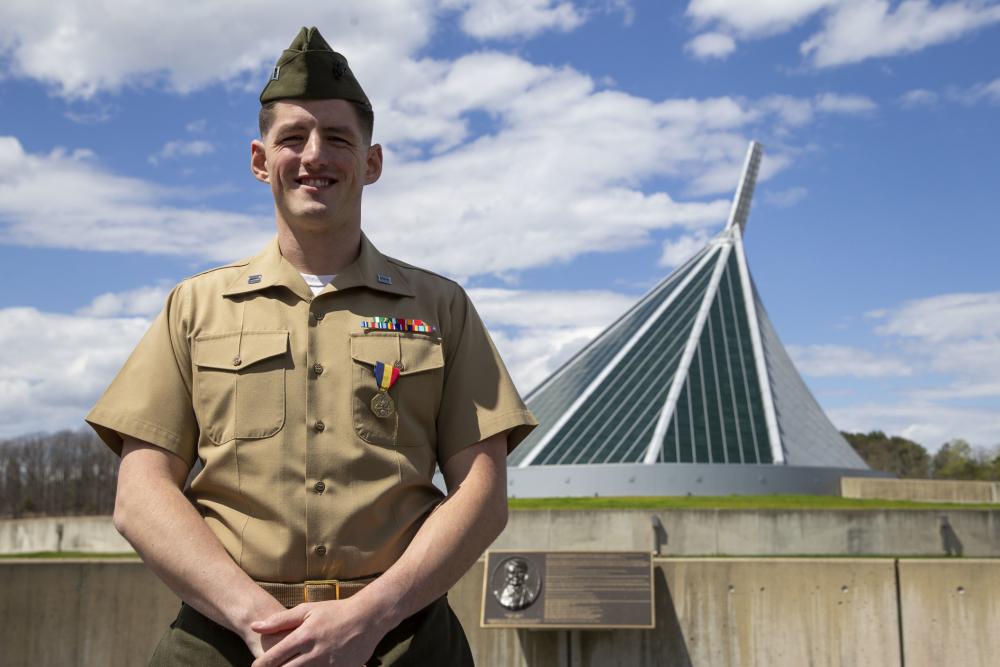 Marine Capt. Timothy Cottell, 28, a Monroe native, received the Navy and Marine Corps Medal in a ceremony next to the National Museum of the Marine Corps on April 8, 2022.

QUANTICO, Va. — Marine Capt. Timothy Cottell, 28, a Monroe native, received the Navy and Marine Corps Medal for his heroic actions, while saving the life of a fellow Marine during a training exercise on the Colorado River on Dec. 10, 2019. It is the highest noncombat medal for heroism awarded by the Marine Corps.

He was among the Marines honored in a ceremony next to the National Museum of the Marine Corps on April 8, 2022.

“It’s very humbling to receive,” Cottell told The Sun in a recent interview. “At first, I didn’t think I did anything crazy to receive something like this. I just thought it was part of my active duty as a Marine — and I didn’t do it all by myself. It was a team effort and team work.”

On Dec. 10, 2019, Cottell stood on the beach, as an executive officer, and watched a light armored vehicle cross the Colorado River. Disaster struck when the LAV got caught in an undercurrent and took on water. It was pulled out into the river, where it began to sink.

Most of the crew escaped the vehicle, but the driver was stuck inside. Cottell said the commander and the gunner tried to get to him, but the hatch wasn’t opening.

When they managed to open the hatch, a junior Marine swam through and grabbed the driver. Cottell and the platoon commander, 1st Lt. Williams, jumped into the water and swam out to the safety boat where they helped bring the unconscious driver aboard.

“We checked his airway, breathing and circulation,” Cottell said. “I was by his head and Capt. Williams was by his chest. I gave him the initial two breaths, because it was waterborne CPR or drowning CPR. Then Capt. Williams proceeded with chest compressions and we kept a rhythm, until he started to regain consciousness.”

In another interview after the incident, Cottell said the driver, “being a Marine”, wanted to continue training with the crew after regaining consciousness.

Cottell said everyone’s actions were critical and all of the Marines involved in the rescue effort were awarded the Navy and Marine Corps Medal.

Cottell’s parents are John and Bernadette Cottell. He grew up in Monroe with his sister and brother, who is also a Marine. Cottell graduated from St. Jude School in 2007, then in the Class of 2011 at St. Joseph High School in Trumbull.

He was an athlete growing up, playing Little League Baseball and recreation basketball. He played on St. Jude’s basketball team and St. Joes’ volleyball team.

Cottell said Boy Scout Troop 63 and Venture Crew 63 in Monroe most prepared him for the military. “I’ve wanted to join since I was a little kid,” he recalled. “I wasn’t sure what branch I wanted.”

As a Boy Scout, he earned the prestigious Eagle Scout rank. His project was installing a small solar panel to the flagpole at St. John’s Cemetery, so it had lighting to fly at night, which Cottell said is the proper way.

He also led scouts in putting in shrubs and pavers to spruce up the base of the pole.

A life of public service 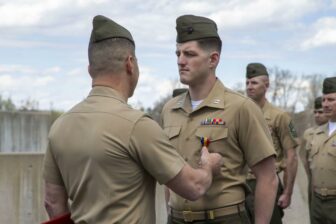 After high school, Cottell went to the New Mexico Military Institute to improve his grades before studying at the U.S. Merchant Marine Academy in New York for four years.

At the U.S. Merchant Marine Academy, one can study for a career in an engine room or on deck. “I went the engine route, doing everything that makes the propeller turn,” Cottell said. “These ships are like little cities with septic systems, generators to provide electricity, a propulsion system and a refrigerant system. You have to make sure everything works properly.”

After graduating with a degree in marine system engineering, Cottell said he could sail on his license in the private sector, as a third assistant engineer or third mate, and spend time in the Reserves, or go full active duty in any branch of the military.

“That’s the commitment requirement that I chose,” Cottell said of the latter option. “My brother earned his commission into the Marine Corps when I was in college. That made me start looking into it a lot more.”

Cottell joined the Marines in 2017 and is still on active duty, stationed in Quantico, Va. During his years of service he said he was deployed with a Marine expeditionary unit, attached to a Naval vessel in the Pacific, for about eight months. 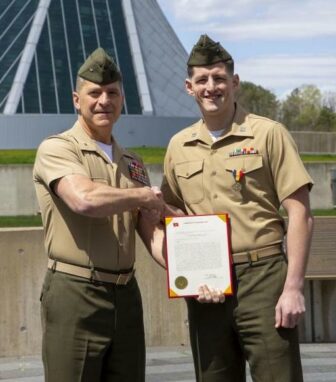 Both Cottell and his brother are captains in the Marines and his sister is a nurse practitioner. Of his parents, Cottell said, “they’re very proud of us.”

“My favorite thing is being with other Marines and working with Marines and junior Marines, and the culture of the Marine Corps as well. I enjoy that and the training I received.”