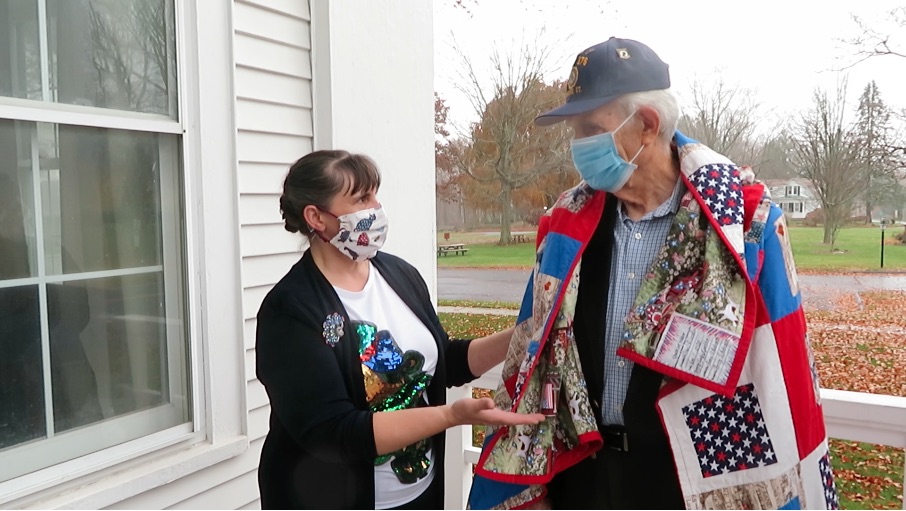 Jennifer L. Willich, left, tells Paul G. Lesko about his Quilt of Valor during a ceremony at the Masonic Lodge on Fan Hill Road Wednesday.

MONROE, CT — Paul G. Lesko, 85, is a Marine Corps veteran, a member of United Methodist Church and an active volunteer for the Monroe Senior Center and Monroe Food Pantry. When comes to his friends, Lesko is also generous with his time, often giving them rides to doctors’ appointments, according to his daughter Janet Morris.

On Veterans Day, the Lady Martha Chapter No. 103, Order of the Eastern Star, shined a spotlight on Lesko, recognizing him for his positive influence on his community and service to his country. The organization presented a Quilt of Valor to him during a ceremony outside the Masonic Lodge on Fan Hill Road.

“Oh, it’s great. I really was surprised,” Lesko said, wearing the quilt around his shoulders. “It’s a great honor and so unexpected. It came out of the blue.”

Morris had received a phone call from the Senior Center asking her to bring her father to the Masonic Lodge Wednesday afternoon, but not to tell him about the quilt.

A Quilt of Valor is an award to service members and veterans who have been touched by war, according to the Quilts of Valor Foundation, a nonprofit based in Iowa. “It says, ‘thank you for your service and sacrifice in serving our nation,'” its website says.

Pat Shelton, secretary of the Lady Martha Chapter No. 103, said Quilts of Valor were going to awarded at the annual Connecticut Convention in Farmington last April, but the event was canceled because of the COVID-19 pandemic. As a result, individual chapters are having their own ceremonies.

This Quilt of Valor is Jennifer L. Willich’s Grand Matron project. It was made by Gary S. Adams, PGP, Worthy Patron.

Adams said he was the only member with experience and the confidence to take on the quilt project, though it had been a while since he had used a sewing machine.

Of making the quilt for a veteran like Lesko, Adams said, “it really inspired me. I want to make more. I will for a granddaughter whose having a baby, then another Quilt of Valor for the foundation to recognize another veteran. They don’t seem to get the recognition they deserve.”

“The most deserving never came back,” Lesko said. “I can’t say enough about them.”

“Paul is a very special man and is deserving of this honor,” Linda Adams said.

In the lead up to the presentation, she told everyone at the small gathering how Lesko served as a buck sergeant in the Marine Corps from 1952 to 1956, and that he now volunteers at the Monroe Food Pantry, stocking shelves, helping clients with shopping and taking inventory, among his many tasks.

At the Senior Center, Lesko volunteers in a variety of ways, from calling Bingo and helping with dinners to cleaning up.

“Paul also takes part in many of the activities that the senior center offers,” Linda Adams said

She said Lesko plays pickle ball, participates in ballroom dancing, plays the ukulele for the Sunshine Strummers, and participates in Mexican train, Tai-chi, does puzzles and takes art lessons.

“I’m pretty active in town,” Lesko said after the ceremony. “A sign in my car says, ‘Do what others say can’t be done.'”

Lesko is a member of the American Legion’s Sippin-Winspur Post 176 in Monroe and the Stratford Marine League.

He and Audrey, his late wife of 55 years, moved to Monroe from Fairfield in the mid-80s. Lesko, who is now retired, used to work at Avco Lycoming in Stratford. He has two grown children and two grandchildren.

When his daughter, Janet Morris, lived in Virginia she was a member of the Anything Goes Quilters. Among the quilts the group made were Quilts of Valor for the large population of retired veterans in the area.

“I’m so proud of his service and I think its lovely that he was honored with a Quilt of Valor,” Morris said of her father. “It was wonderful to see it come back around.”