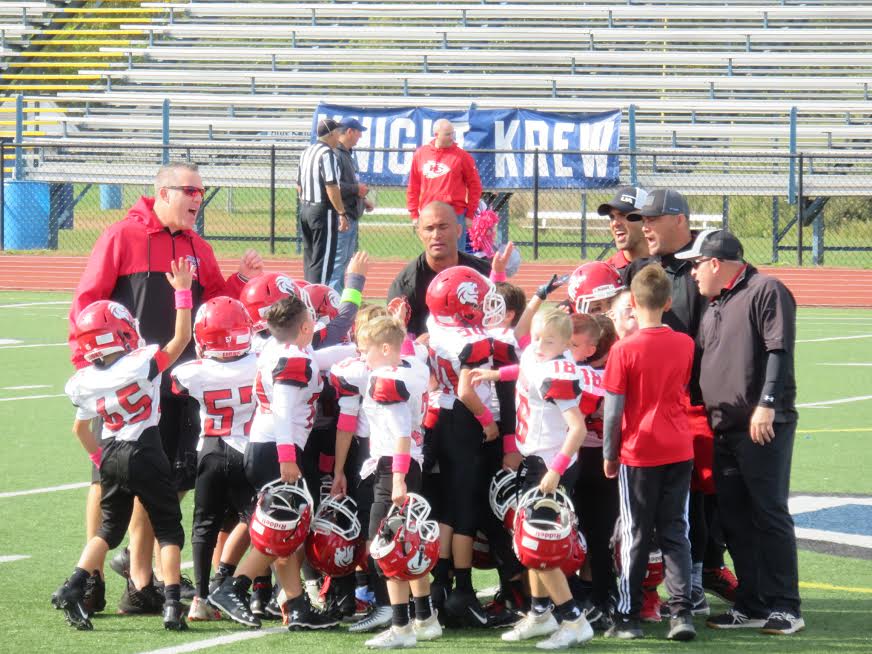 The Monroe Lions third graders are running the table in AYF play this season and are vying for a championship game at Wolfe Park on Oct. 27.

A battle of two undefeated third-grade football teams was played at Southington High School Sunday, and it was the Monroe Lions who left with their perfect record intact.

The Lions won in a shootout, 54-30, to improve to 6-0. Monroe’s offensive explosion came at the expense of a Southington 79’ers defense that had not yielded a point all season.

If the two teams meet for the league championship game on Sunday, Oct. 27, the Lions will have home field advantage.

“It was a great win and I am very proud of this team,” said Lions Head Coach J.J. McGee. “We look forward to finishing strong. We will be ready.”

Despite a big day by the 79’ers’ quarterback, the Lions’ quarterback Tyler August led an offensive attack that overwhelmed the home team.

In addition to his touchdown catch, Patti also delivered some crushing blocks on offense and had numerous tackles and a fumble recovery on defense.

Tyler August was involved in big offensive plays and made many key tackles. Another defensive standout was Emilio “Mo” Granata, who caused chaos in Southington’s backfield all day, finishing the game with several tackles and a fumble recovery.

Granata and Christian Meyers each hauled in passes for extra points after Lions’ scores.

Many of the team’s second graders also made an impact. Quarterback James Ely ran outside for some big gains, while halfback Matty Convertito showed off his stiff arming ability on one play, going around the edge and turning upfield for a huge gain.

Eighth graders put up a fight

The Monroe Lions eighth graders visited the undefeated Southington Knights on their own turf and threw a haymaker in the first half, leading 40-27 at intermission. But the Knights were only hobbled. Southington regained its footing and beat the Lions 47-40.

Monroe’s players showed heart and were able to leave the field with their heads held high.

In other Lions’ action, the seventh graders blanked Wallingford 33-0, the sixth graders lost a hard fought game to Newtown 25-13, the fifth graders topped Guilford 26-6, and the fourth graders won in a 40-13 blowout against Cheshire.