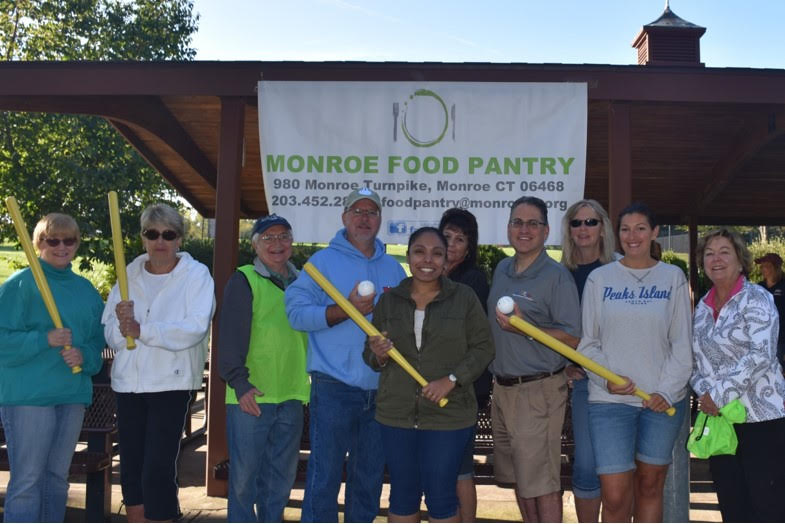 Seven teams slugged it out in the sun on a picturesque fall day at Wolfe Park Saturday, while going to bat against hunger in the first annual Monroe Food Pantry Wiffle Ball Tournament.

On a day when Dave Mullany, president of Wiffle Ball Inc. and a Monroe resident, threw out the first pitch, over $1,000 was raised to benefit the food pantry. Coordinator Kathleen Turner said more than 200 Monroe families received assistance last year.

“Thank you, everyone, for continuing to support the Monroe Food Pantry,” Turner said. “We hope to make the Wiffle Ball Tournament a town tradition.”

“It was a fantastic day weather and fun-wise,” said John Murphy, an organizer of the event. “My thanks to everyone who helped make it happen: our sponsors, our volunteers and the teams. I am looking forward to next year!” 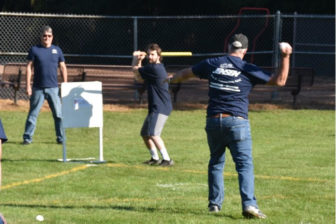 A pitcher winds up to throw during the Monroe Food Pantry’s Wiffle Ball Tournament at Wolfe Park Saturday.

Both Turner and Murphy said next year’s goal will be to at least double the number of teams.

Teams competing in the Family Fun League included U11 Travel Baseball and The Chicken Tenders.

The Major/Minor League featured All Rise for the Judge; Bajda’s Bombers; Jensen Tire, Auto and Marine; The Monroe Monsters; and Realty ONE Group Connect.

U11 Travel Baseball, the Family Fun champion, was awarded a gift certificate donated by McGowan’s Pizzaland.

The Major League champions, All Rise for the Judge, and the second-place team, the Bajda Bombers, were given gift certificates donated by Jennie’s Pizza and Honeyspot Pizza.

Joe Moravsky, the Channel 12 weatherman and an American Ninja Warrior, was captain of the All Rise for the Judge team and made a generous donation to the Monroe Food Pantry.

The tournament got underway after First Selectman Ken Kellogg thanked all of the volunteers for making the event happen and Turner gave a brief overview of the Monroe Food Pantry. 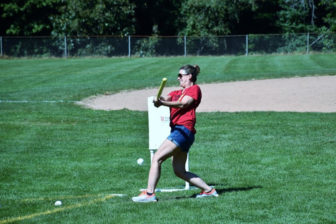 Kellogg said the bats and balls came right off the factory line, adding the tournament is something the organizers want to grow.