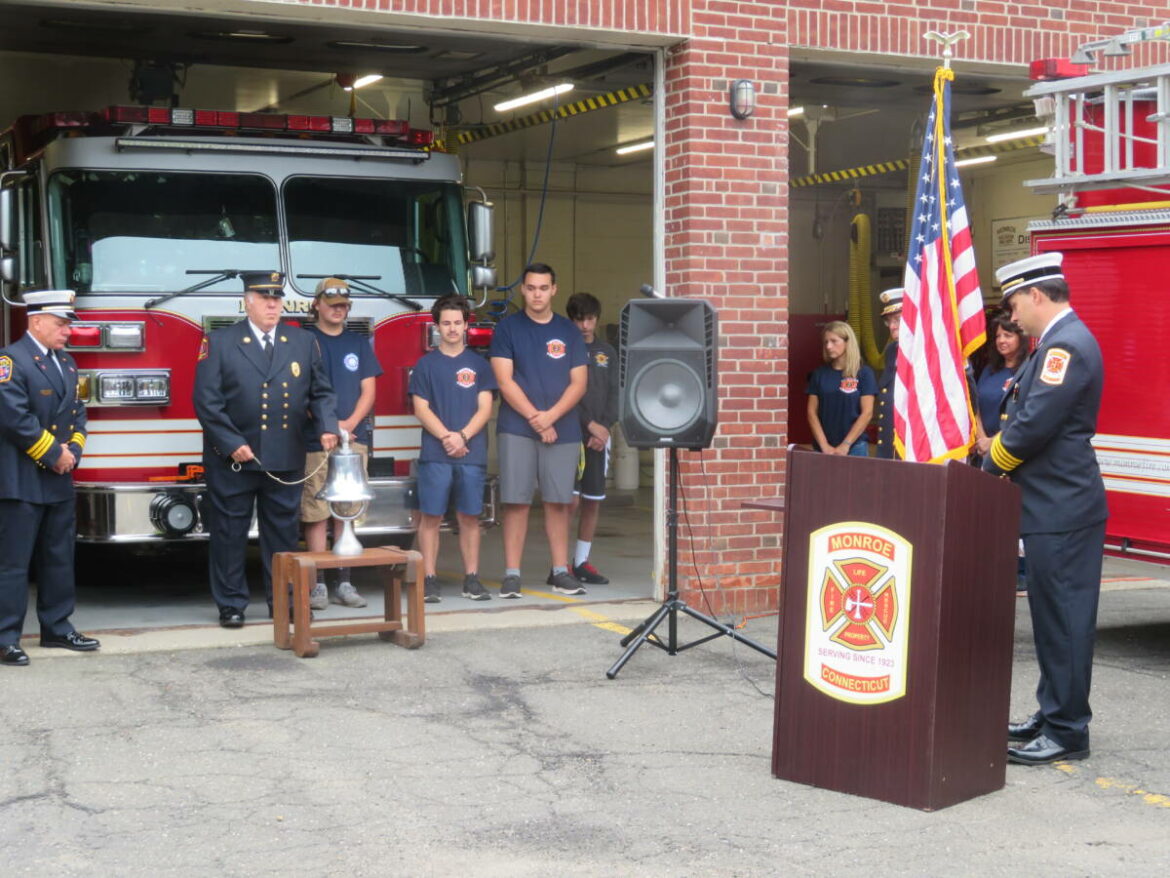 A bell is rung during a 9/11 ceremony at the Monroe firehouse on Shelton Road Sunday morning.

MONROE, CT — First responders gathered in the parking lot of the firehouse on Shelton Road Sunday morning, for a solemn ceremony honoring lives lost on September 11, 2001. It was the 21st anniversary of the horrific terrorist attacks, when planes were hijacked and flown into both World Trade Center Towers in New York City and into the Pentagon.

Passengers of Flight 93, a fourth commercial airliner that was hijacked, fought back and overpowered their attackers, before the plane crashed in Pennsylvania. 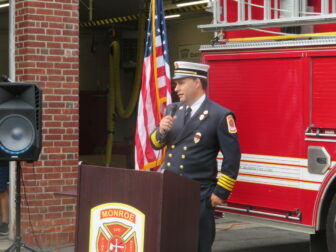 Over 400 emergency responders were among the 2,977 innocent victims who lost their lives that fateful day, and even more, who sifted through the World Trade Center rubble in search of survivors, died from illnesses years later.

To put the loss of the New York Fire Department in perspective, Monroe Deputy Fire Chief Kevin Catalano said 70 to 100 firefighters lose their lives per year and the FDNY had lost 343 members in one day.

Emergency services have a “signal 5-5-5-5,” a signal that goes out over the FDNY’s intercom and dispatch channel when a firefighter is lost. Monroe firefighters rang a bell five times, then repeated the sequence to honor New York’s Bravest who died on 9/11. 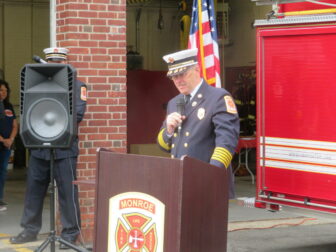 Fire Marshal William Davin reflected on “the 102 minutes that changed America forever,” when a terrorist attack on American soil spread fear and uncertainty.

He recalled how airline passengers slept the night before Sept. 11, 2001, in preparation for their flights, and firefighters, police officers and EMS personnel went to bed to rest up before their morning shifts.

“In one single moment, life may not be the same,” Davin said, encouraging everyone, not to take life for granted. “And never forget,” he said. 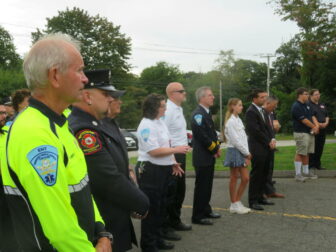 When David York, chaplain of all three fire companies, led everyone in prayer, he noted how fragmented and divided the country is. “We want a community,” he said. “It takes a village. It takes togetherness that hopefully continues our efforts to be one with our community.”

“As we all know, among those lost were hundreds of public safety professionals from law enforcement, firefighters and emergency medical services, ” Kellogg said from the podium. “First Today, I want to honor the memories of those lost by extending the heartfelt gratitude of the Monroe community for those who choose to face danger to come to the aid of those in need.” 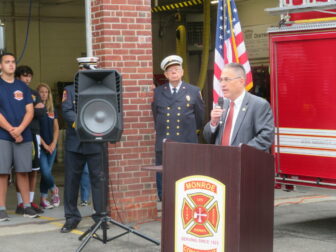 “Whether career or volunteer, the training and responsibilities are the same … and so are the risks,” he said. “Thank you for doing the work that you do and for accepting these immense responsibilities.”

“We come together today to hold firm on our commitment to never forget,” Kellogg said. “To remember the sacrifices made to help others in need. But also to remember that we are a country made of communities that must remain strong and resilient, and value our diversity without diminishing our unity as Americans. Thank you for being here today, for honoring those sacrifices, and keeping us strong, united and resilient.”