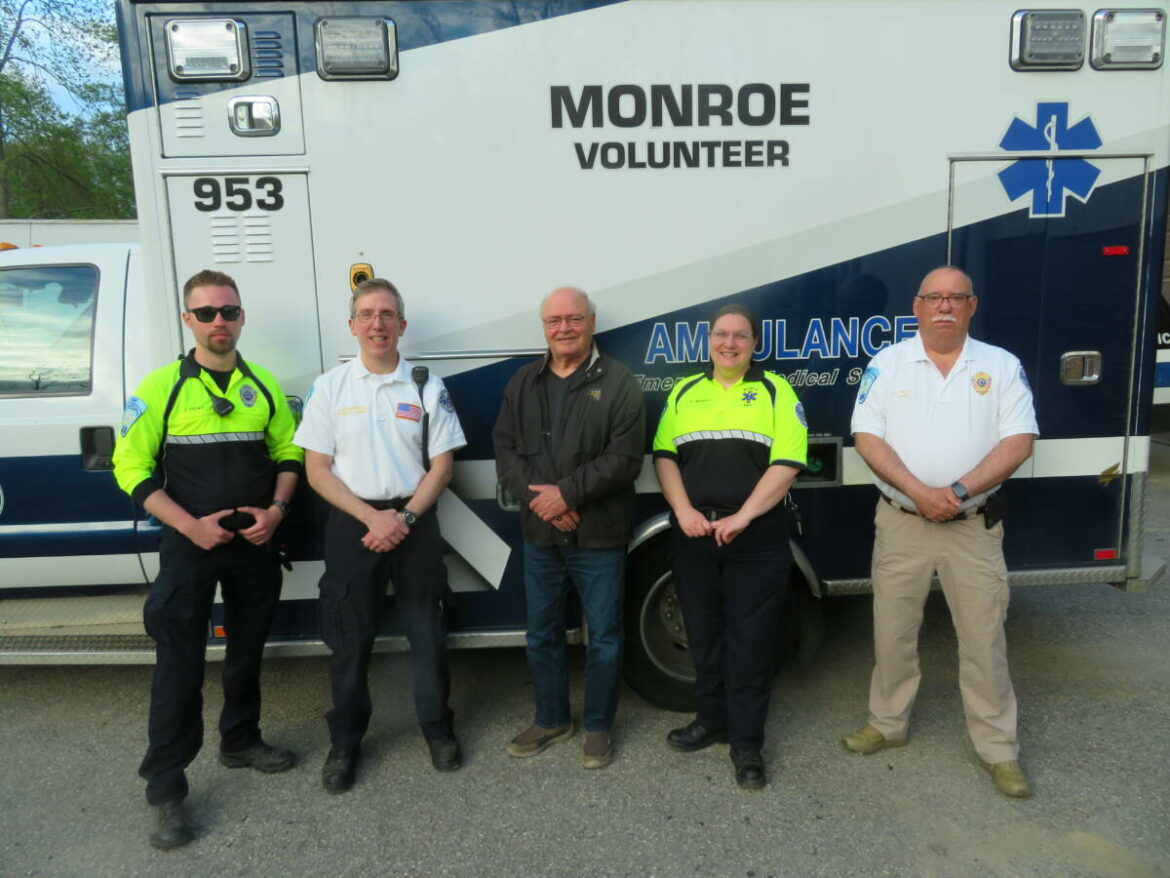 MONROE, CT — Monroe Volunteer Emergency Medical Service members responded to patients’ needs amid the COVID-19 pandemic, during a record-breaking year for call volume in 2021. The agency stretched its staffers to the limit, because training for new members to help them had stalled due to health concerns.

One recent Wednesday evening, a few members were interviewed around a table outside a construction trailer the volunteers have been working out of during the renovation and addition to the EMS headquarters at 54 Jockey Hollow Road.

“We have a core group that has really been working hard during the pandemic up to now,” said EMS Chief Don Smith.

Jonathan Ficko, another volunteer, recalled a recent cardiac arrest call when the emergency medical technicians on duty were already involved with two active calls. Ficko and another volunteer responded on their day off to give the patient CPR.

“When the chips are down, people show up,” Ficko said.

Smith said the call volume, which has been rising since 2015, reached 1,633 last year and is trending to reach 1,800 by the end of 2022. The increase in calls is not unique to Monroe, according to Smith, who said it is happening throughout the entire region.

Despite the challenges they face, Monroe’s volunteers have kept up.

“It says a lot,” said EMS Deputy Chief Craig Rosenberg. “We were here every day, going out, and we never had a gap in service — ever.”

It is consistent with the theme of this year’s National EMS Week: “Rising to the Challenge.” The recognition of the country’s EMS services starts today, Sunday, May 15, and runs through May 21. 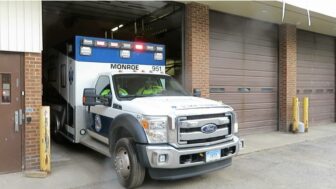 An ambulance at Jockey Hollow Firehouse heads out on a call one recent Wednesday evening.

Aside from responding to medical calls and car crashes, the EMS covers community events with an ambulance on standby at football games, the annual Sprint for Monroe and other large public gatherings, according to John Brenna, a member who also serves as chairman of the Monroe EMS Commission.

Over the years, the EMS has hosted CPR classes for the public and its volunteers worked at all of the town’s vaccine clinics during the pandemic.

“We worked with the Monroe Health Department to bring vaccines to residents who are homebound,” said Rachel Murphy, an EMS member.

In the past, Brenna said the EMS did food drives for the Monroe Food Pantry and offered blood pressure clinics and townwide CPR training. Rosenberg said another program was Stop the Bleed, adding they trained 70 school staffers one year.

Smith said the EMS wants to go into the community more to offer training for the public, including education on the prevention of injuries, Stop the Bleed and CPR.

“If the person standing next to you knows CPR and can stop bleeding until we get there, this is going to save lives,” said Ryan Condon, an EMS member. 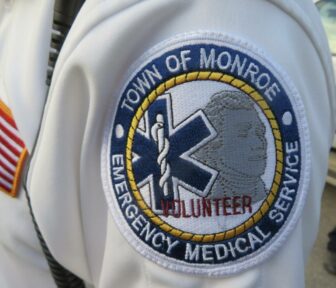 In the 1970s, Smith said many ambulance services were run by police departments, whose officers responded to calls in station wagons. The Monroe Volunteer Emergency Medical Service began in 1977.

Brenna said there were probably around eight to 12 volunteers in the original company.

When Smith joined the EMS 22 years ago, he said it was headquartered inside the electrical room of the Monroe Police Department. That year, he said its volunteers responded to around 800 calls, so the volume has nearly doubled since then.

“There were two bays with inches to spare,” he said of the tight space the service’s two ambulances had to operate in.

The hybrid service is staffed by its volunteers, as well as one full time paramedic and one full time EMT provided by Valley Emergency Medical Services, which means the positions are always staffed with someone 24/7, 365 days a year.

The EMS has three ambulances, one paramedic fly car (which meets up with ambulances on the way to the hospital for calls requiring advanced life support), and one basic life support vehicle. 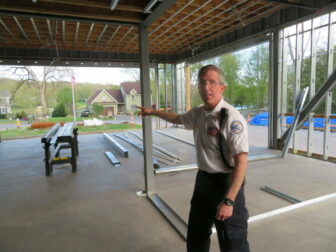 The MVEMS has outgrown its current facility, but voters approved a $4.5 million renovation and addition project to its headquarters, a project funded in part with a $500,000 Small Town Economic Assistance Program grant.

The addition, which now only consists of a concrete floor with metal framing, will include a main entrance at the left side of the building, leading to a lobby. Off the lobby, to the right, will be a spacious training room.

Once the building project is complete, Smith said the EMS will be able to host training sessions and attract new membership. Among the skills members learn is medical training, CPR and trauma.

“The primary goal is to identify the problem, stabilize the patient, give immediate, appropriate care in the field and transport patients to the hospital, turning them over to definitive care,” Smith said.

Previously, the second floor of the firehouse had two small rooms used for office space and bunks, while the bathroom and shower were downstairs in the garage.

The project includes the construction of five bunk rooms and two bathrooms with showers on the second floor, vastly improving conditions for members serving overnight shifts.

“The town supports us,” Condon said.

“Thanks to the town, we’re well-equipped,” Rosenberg agreed. “We have what we need. During the pandemic we received tons of support to obtain the protective equipment we needed.”

Aside from the capital needs the town provides, Monroe’s EMS volunteers and firefighters are eligible to receive up to a $1,000 tax abatement every year, no matter what town they live in.

“It’s a thank you for all the time and effort people give to the town of Monroe,” Smith said.

Sometimes recognition comes from outside the town. For example, Jack Sheehan received an award from St. Vincent’s Medical Center for volunteering over 1,200 hours to the Monroe EMS, according to Smith. 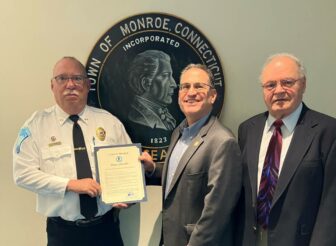 First Selectman Ken Kellogg has been involved in emergency medical services since the late 1980s. He was a longtime EMS volunteer for the town of Stratford, had served as the EMS coordinator in the Emergency Department of St. Vincent’s Medical Center, and chaired the EMS Commission in Monroe.

“While I haven’t worked in the back of an ambulance for many years, I’m still a licensed paramedic and fully understand the immense commitment made by our EMS volunteers,” Kellogg said. “The training is significant and doesn’t end once you become an EMR, EMT or paramedic. I’m grateful that we have so many volunteers that are willing to make this commitment.”

On Friday, the first selectman honored the MVEMS with a proclamation, presenting it to Smith and Brenna.

The town’s EMS service has evolved over its history, expanding to three ambulances and a paramedic level service, as well as offering more advanced levels of treatment with improved technology.

“With the care that we have here, we’re bringing the ER to you for the early steps of care,” Rosenberg said.

However, like most volunteer organizations Monroe’s EMS can use an infusion of new volunteers to grow its membership.

“Our members are comprised of people from all walks of life, from high school members through retirees — from all professions and different towns,” Smith said. “We try to stress that anybody can do this. A lot of people think, ‘I can’t deal with blood,’ but they can through the training they receive and by working with other experienced EMTs. People can do this job and we need the help.”

“If you think of what we do every day, it’s a privilege,” Rosenberg said. “You see people at their worst sometimes and you show up to help, and you have an immediate impact. It becomes a calling.”

Among the advantages of having a volunteer EMS service, Smith said, “you have a group of people who do it because they want to help their neighbors. They bring compassion. They’re doing it to help others.”

Interested in becoming an MVEMS member? Send an email to [email protected]