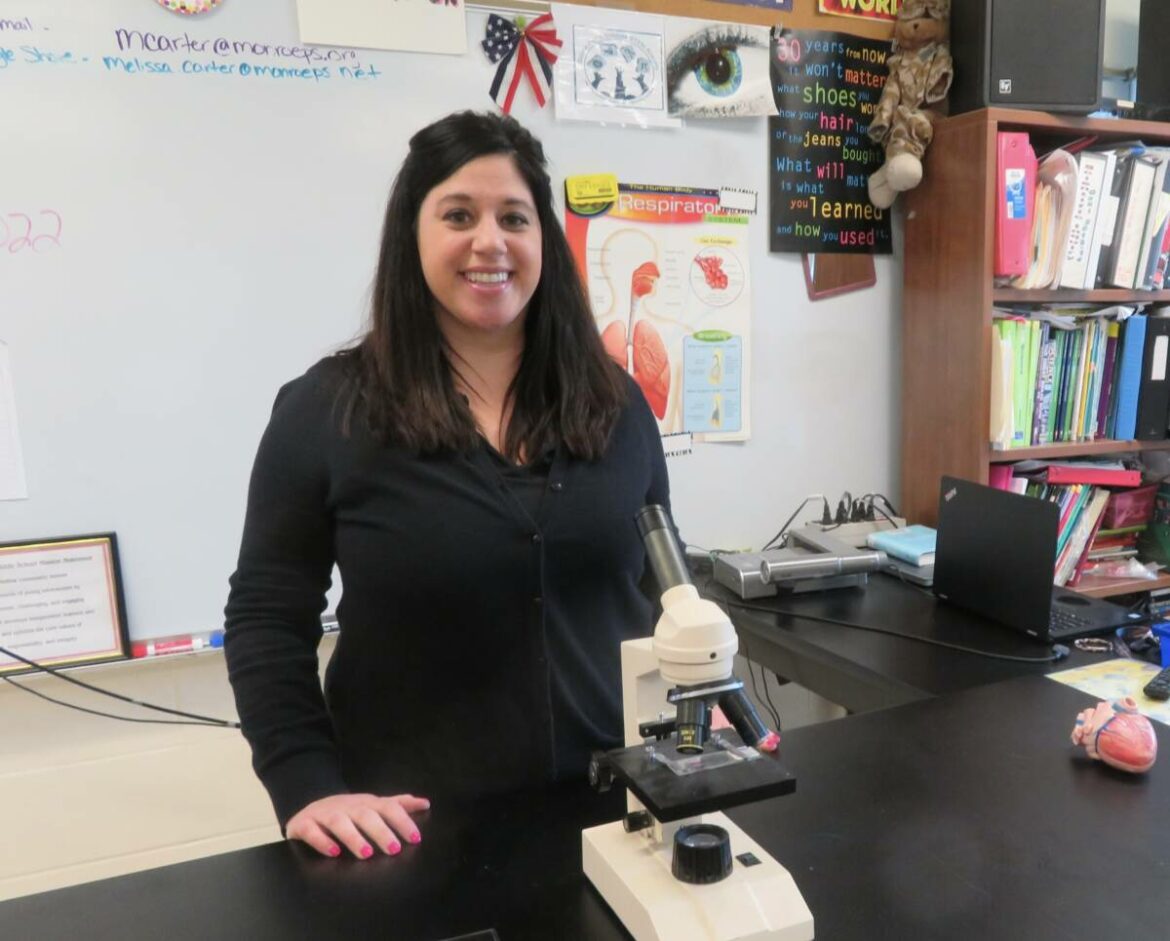 Melissa Carter teaches science to sixth-graders at the Jockey Hollow STEM Academy, which is housed in a wing of Masuk High School.

MONROE, CT — Melissa Carter grew up in Monroe and went on to embark on a 19-year-teaching career after graduating from Masuk High School with the Class of ’98. In the Monroe public school district, she is among the original teachers to start the Jockey Hollow Science Technology Engineering and Math (STEM) Academy 11 years ago.

Carter’s work has not gone unnoticed. This year she was honored by the Connecticut Science Teachers Association with the 2021-22 Excellence in Middle School Science Teaching award. 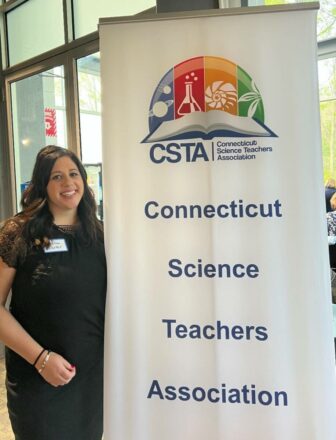 Melissa Carter attends the awards ceremony at the Discovery Center in Bridgeport on May 11.

The Connecticut Science Teacher of the Year award is given to one elementary, one middle and one high school teacher every year.

“I always knew I wanted to be a teacher,” Carter said during a recent interview in her classroom, in the STEM wing of Masuk. “I played school when I was younger. I always liked science and tried to build things myself.”

Carter said her experience as a student in Monroe’s public schools fueled her inspiration to pursue a career in education.

“We’re really excited that Melissa has been recognized for this award,” Superintendent of Schools Joseph Kobza said. “What makes it even more special is to know that Melissa is a graduate of Masuk who thrived in her science classes as a student. It’s very rewarding to see her instill the same passion for science in her students that she received from her teachers.”

“She’s the kids’ first science teacher in STEM,” said Julia Strong, director of the Jockey Hollow STEM Academy. “She sets them on the track of inquiry based learning on their first day of school. Kids do projects and learn with all fives senses.”

Carter earned her Bachelor’s and Master’s degrees from Quinnipiac University with a double major in education and law and earned 60 more credits beyond that at various institutions. 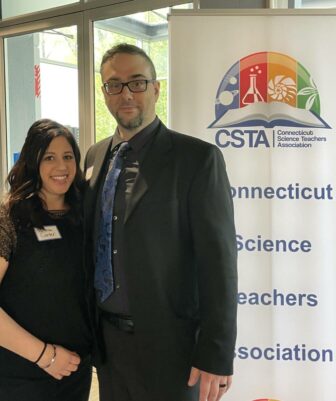 She started out as a fifth and sixth grade science teacher at Chalk Hill Middle School, then taught at Fawn Hollow Elementary School for one year, before helping to start the STEM Academy in 2011. She now teaches sixth graders.

White lab coats hang from a rack inside Carter’s classroom, a plastic skeleton is on display and shelves hold microscopes and boxes filled with other supplies.

“There are more boxes in the STEM supply closet with her name on it than any other one of us here in STEM,” Strong said, “and that shows her commitment to hands on learning. The goal in Melissa’s class is not to just memorize facts, but to think like a scientist.”

“It’s inquiry based, so the kids come up with questions and come up with solutions to their problems,” Carter explained. “The students collaborate, come up with ideas, build and design different projects and present to the class.”

Carter said hands on learning through experiments is what inspired her most as a student, along with the knowledge of how innovation is needed to develop new technologies, while keeping up with a world that’s constantly changing.

“I love when the children get really excited and discover good ideas and share them with their classmates,” Carter said of teaching. 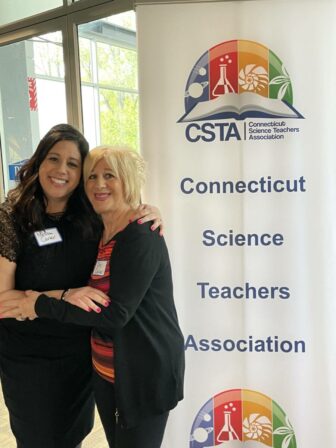 Over the years, Carter earned the respect of her peers in the Monroe school district, including Jim Stoelzel, head of the Science Department for grades six through 12. In 2014, he nominated Carter for the Presidential Award of Excellence in Math and Science Teaching.

“I’ve always been a big fan of Melissa’s, so I wasn’t surprised when she won this award,” Stoelzel said of the Excellence in Middle School Science Teaching award. “She sets up a very caring environment in her classroom and everything is facts in science.”

The person who nominated Carter for this year’s Excellence in Middle School Science Teaching award did so anonymously, before the Connecticut Science Teachers Association’s board chose Carter from among the candidates.

“I think Melissa might be our first teacher to win this award,” Strong said, “and we’re very lucky to have Melissa in Monroe teaching our students in STEM, giving them a strong foundation in curiosity and making like a scientist from their first day in STEM.”

Carter said she was “completely in shock” when she received an email from the Connecticut Science Teachers Association, informing her that she won the award and inviting her to its awards ceremony at SHU’s Discovery Science Center and Planetarium in Bridgeport on May 11.

“I’m very grateful, humbled and honored for sure,” Carter recalled. “It was a surprise. I learned six days before the awards ceremony. It all happened so fast.” 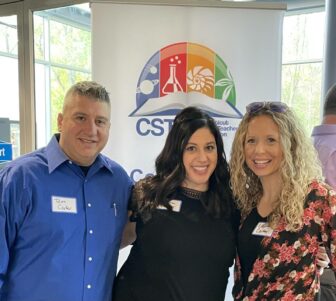 Melissa Carter is flanked by her brother, Tom and his wife Laura.

“I would like to extend a special heartfelt thank you to my family and friends for their unwavering support,” Carter said in her acceptance speech.

Carter’s proud fiancé, Chris Berardi, who is a musician and freelance artist, attended the ceremony along with Carter’s mother, Joy, brother Tom and his wife Laura, and her mother. Carter also has a sister, Kimberly, who is a social studies teacher in Florida.

“It was fabulous and really unique — really cool,” Carter said of the event. 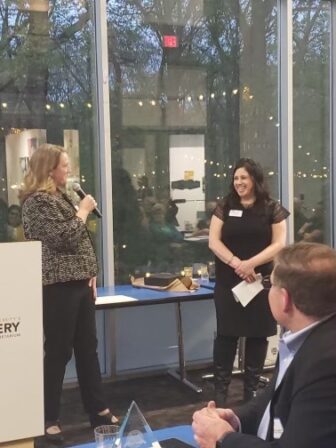 Julia Strong, director of the Jockey Hollow STEM Academy, says a few words about Melissa Carter during the awards ceremony at the Discovery Center on May 11.

The Science Center performed experiments and guests were treated to a show in the Planetarium, according to Carter.

She reflected on what it means to her to be part of Monroe Public Schools and a community with “incredible students and families.” Carter said the school district gives her total encouragement, flexibility and support, adding how fortunate she is to work with “fabulous administrators and colleagues.”

“In this ever changing world, the challenges continue to grow,” Carter said. “As science educators, it’s our goal to prepare our students to face global challenges, to figure out solutions to problems, to be independent thinkers, who can collaborate with others, and find or design ways to make this world a better place, all while being able to be compassionate, kind, and caring individuals.”

“Even though the award has my name on it, I believe it belongs to all of us who continuously support and live the science goals,” Carter said. “I’m very lucky and grateful to work here with such great people.”