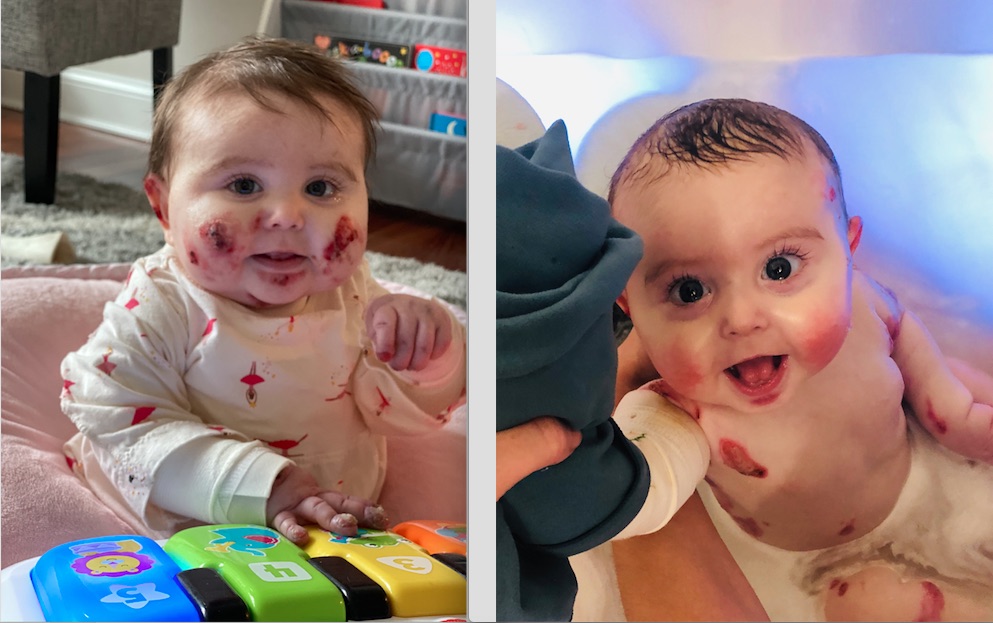 MONROE, CT — When Katie Ramsey gave birth to daughter Sophia Grace on April 20, 2019, the infant captivated Ramsey and her husband, Tim, with her big, beautiful eyes. But she was born with a few scabs on her body, which doctors at Bridgeport Hospital believed to be from a viral infection.

After weeks of tests, Sophia was diagnosed with a devastating genetic disorder called Junctional Epidermolysis Bullosa.

“This is a really rare recessive genetic disorder,” Ramsey said. “There was no way we would have known we were carriers. They don’t test for it, because it is so rare.” 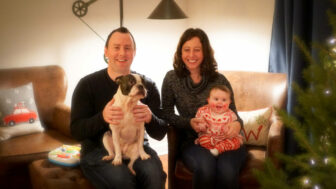 Tim and Katie Ramsey with their dog and their daughter, Sophia Grace Ramsey.

The devastating disorder causes blisters and erosion — areas of missing skin — in response to minor injuries from friction such as rubbing or scratching.

Sophia had junctional EB, a type that is terminal in early childhood, carrying a life expectancy of one to two years. Tragically, she succumbed to EB after 13 months, but her parents continue to fight on.

The Ramseys started the nonprofit Sophia’s Hope to raise money for research and the couple became involved with the Plunge for Elodie to help another little girl living with EB.

Elodie Kubik, 4, of Greenwich, was born with Recessive Dystrophic Epidermolysis Bullosa. Those with that version of EB have a life expectancy of 30 years, according to Ramsey. Other versions carry a normal life expectancy, she added.

There is no treatment and no cure for EB, but advances in research gives the Ramseys hope.

“We are very close,” Ramsey said of recent gene therapy and techniques. “Researchers feel they have the science. It’s just about the funding. They believe a cure is on the horizon within 10 years.”

Now in its 4th consecutive year, the Plunge for Elodie has raised $700,000 for the EB Research Partnership, funding critical research aimed at curing EB and other rare diseases.

This year’s Plunge started on Feb. 28 and will run through March 28. The virtual event is being held in honor of Sophia.

“Because of the pandemic, we’re asking people to do their own plunges and send them to us,” Ramsey said. “They can run into the ocean like we did, jump in a bathtub, splash themselves or they could just send a video of themselves saying how important it is to do EB research.”

The Ramseys had lunch with Elodie’s family at a private beach in Greenwich, where they filmed a promotional video running into the ocean for the plunge.

On Plunge for Elodie website, people can upload their videos, which will be included in a montage in the end of the event. 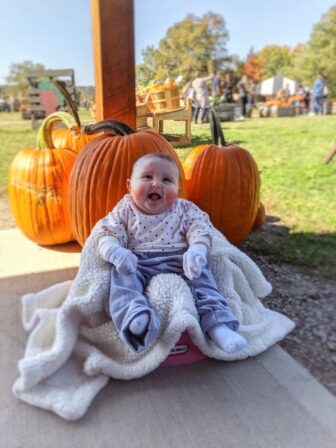 Sophia Grace Ramsey sits among pumpkins during a fall outing.

When Sophia was born with scabs on her body, she was placed in the neonatal intensive care unit for a couple days, but was not getting any better. What followed was three weeks of tests before the young Monroe couple was referred to Dr. Richard Antaya, an expert in pediatric dermatology at Yale New Haven Hospital.

“He’s an amazing guy,” Ramsey said. “I could call him in the middle of the night. He was always there for us. He’s an amazing person. We owe a lot of him for her quality life.”

Dr. Antaya did a skin biopsy that confirmed Sophia had EB. Then he did genetic testing and found she had the most severe kind of EB.

“She was doing well, so we hoped it wasn’t that, but then she had problems with her airways,” Ramsey said. “It was very overwhelming. It was a difficult year. You are so afraid of your baby having a cold or anything, then for her to have something with this severity.”

During her life, Sophia had four hospital stays after special procedures, with the length of the stays ranging from a few days to a couple weeks. But, due to the fragility of Sophia’s skin, her parents provided most of her care at home.

Her day started with a special 30 minute bath, with salt and vinegar added to the water to prevent bad infections. Then her wounds were bandaged in a procedure lasting anywhere from one to two hours.

Ramsey said she would remove all of the old bandages very carefully, clean her daughter’s wounds, touching the wounds up with ointments and rewrapping her skin.

The Ramseys used special bandages made for burn victims, which are nonstick and lined with medications. The bandages are expensive. Sophia weighed 12 pounds when she was 13-months-old and the monthly cost of bandages was $30,000, according to Ramsey.

“It’s just so painful and it costs a lot,” she said. “In Connecticut, we’re lucky wound care is required to be covered by insurance. By the time Sophia passed away, I was wrapping her head, her torso, her arms and her legs.”

“She was really amazing,” Ramsey said. “She had a lot of pain she had to go through, but she was smiling all the time. She was a fighter. We were very blessed to have her.”

Sophia loved to connect with people, looking into their eyes. “She just loved to look at people,” Ramsey said.

Sophia also loved listening to music, so her parents played music in their home and acted silly to make her laugh. “Eventually, she made us work for it a little,” Ramsey said. “We danced in front of her. We wanted to make her smile as much as possible.”

Dr. Antaya got Sophia and another local baby to be included in a medical trial. Ramsey said it was originally going to be in California, but Dr. Antaya took charge of it, so other doctors allowed him to have it in Connecticut.

“I believe it gave her a longer life with months of less pain,” Ramsey said of her daughter. “It really healed some aspects of her condition. Her airway was affected and it did heal that somehow.”

Sophia’s condition was severe by the time she participated in the medical trial and Ramsey cannot help but wonder what could have been if the treatment was sooner. That is one of the things that drives her and her husband’s efforts to raise money for research.

“After Sophia passed away, I promised her that I would keep fighting for her,” Ramsey said. “I just wanted something where her story would be shared and people could learn about EB. People don’t know about it and we can’t raise funding if they don’t know it exists.”

The couple started Sophia’s Hope to Cure EB to raise money for the EB Research Partnership and to spread awareness by sharing the stories of Sophia and other families affected by EB.

One activity it promotes is the painting of rocks that have the web address of the EB Research Partnership at the bottom. They rocks, with colorful designs, are left around town for people to find and learn about EB.

The website says: ​”Sophia Grace was loving, sweet, courageous and radiant. She was an inspiration to all who knew her, and continues to inspire us all to be better people, and to fight for a cure for Epidermolysis Bullosa, a rare and debilitating genetic disorder. Sophia deserved to live a life free from pain and suffering; we know her hope would be to see a cure for EB, so that no other child suffers.”

YouTube videos below tell Sophia’s story and promote the Plunge for Elodie: