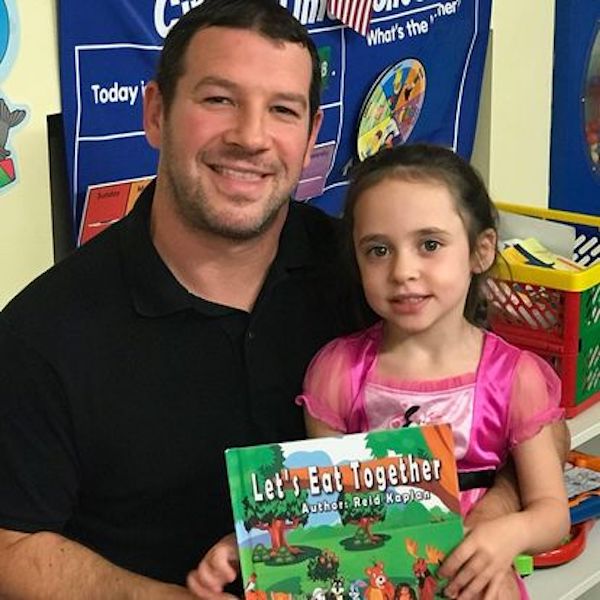 Reid Kaplan, of Monroe, and his daughter Charlie, 8, get ready to read his book, "Let's Eat Together."

MONROE, CT – Reid Kaplan, of Monroe, a children’s book author whose popular titles include “Let’s Eat Together” and “How did that Mouse Get in Our House?”, will donate 40 percent of the profits for all online sales of his books this month to the Monroe Playground Foundation.

The online “Buy a Book, Build a Playground” fundraiser will be followed by book signings and in-person sales at Wolfe Park on April 2. Kaplan’s donation will benefit the foundation’s project to replace the park’s wooden Kids Kreation Playground with a safer, modern playground called The Wolfe’s Den. 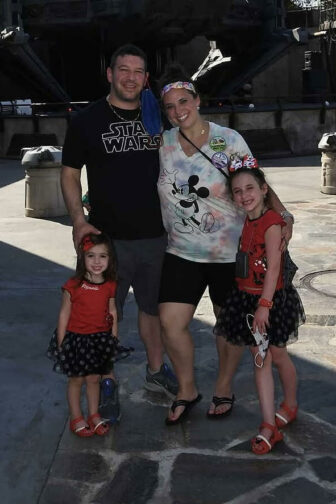 Reid and Kristen Kaplan enjoy a vacation with their two daughters, Ella, 3, let, and Charlie, 8.

“It really means everything to me. Wolfe Park is one of the finest places I can remember growing up here,” Kaplan said in a telephone interview Thursday.

Kaplan, a former Masuk football player who graduated with the Class of ’97, has fond memories of playing baseball, football and basketball at Wolfe Park, catching frogs in the lake, walking along the trail, and fishing at Great Hollow Lake with his friends.

He and his wife, Kristen, who also grew up in town, have two daughters, Charlie, 8, and Ella, 3, who are young enough to benefit from the new playground.

“Being able to help give the kids a fun, safe place to interact and enjoy a playground, new equipment and each other, to me, there’s nothing better than that,” Kaplan said.

One of the best features of the new playground will be is accessibility to children of all abilities, according to Kaplan.

“It’s good for everybody to be included,” he said. “I don’t like it when kids are playing by themselves. Nobody should ever have to eat or play alone.”

Kaplan’s books can be ordered for the playground fundraiser from now through March 31 and can be shipped or picked up at the free book signing near the basketball courts at Wolfe Park on April 2, between 10 a.m. and noon.

A love of creativity 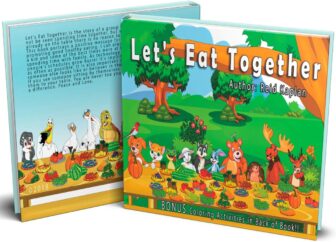 Kaplan went to Central Connecticut State University in New Britain after Masuk, then went on to graduate from the New York Film Academy.

“I made a couple independent features and wrote some scripts,” he said. “We came up with a lot of videos and I worked on some sets.”

Kaplan does marketing and produces video content and ads. “Through my education with film I’ve been able to spin it off with writing, directing, editing and producing,” he said.

He enjoys experimenting with stop animation, and uses Adobe Suite, Photoshop, Premier Pro, After Effects and Lightroom. “You can make some cool things,” Kaplan said. “I love creativity.”

Kaplan said he has been writing since age 17, adding he has written around eight feature film scripts and a lot of smaller scripts, as well as scripts for cartoons. 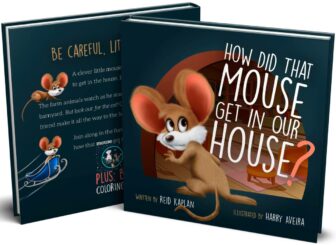 “After I had my daughter, Charlie, I wanted to write children’s stories,” Kaplan said. “I wanted to be able to share my writing with my daughter. I had to switch up the content. In my opinion, it’s still story telling. You’re just telling it to a different audience.”

Kaplan’s stories include morals, manners and life lessons – even for the adults who read to their children. “You’re never too old to learn,” he said, adding humor is important to keep readers’ attention.

The first book he published was “Let’s Eat Together” and another popular title of his is “How did that Mouse Get in Our House?” The latter has been included in Amazon’s top 100 list of baby and toddler nursery rhyme books, appearing as high as second.

“I include bonus activities in each book for the kids to use their imagination with such as coloring sheets, connect the dots and word finds,” Kaplan said. “So when parents purchase my books they are getting a book with activities for their kids to enjoy after reading.”

“Let’s Eat Together” is a series following the adventures of its main character Mr. Squirrel, who invites animals who would not normally spend time together to share food at a meal and enjoy each other’s company.

“When there’s enough food on the table, even if we’re different, we can all eat together and get along,” Kaplan said.

In the next book, “Let’s Eat Together; Under the Sea”, Mr. Squirrel dons a scuba diving suit and goes into the water to arrange a meal with sea animals. Kaplan said the ongoing series will include up to seven books.

In one of the books, Mr. Squirrel will go in a time machine and organize a meal with dinosaurs. “During classroom visits, I ask kids what their favorite animal is,” Kaplan said. “Fifty percent of the time they say dinosaurs.”

Other stories will include meals with animals in the jungle, nocturnal animals and fairytale animals.

After “Let’s Eat Together; Under the Sea” is published, Kaplan said “Good Thing Bad Thing”, an anti-bullying book, will come out.

“It’s a story about a girl whose mom asks her to tell her a good thing and bad thing about her day and she does,” he said.

The spirit of sharing food goes beyond the “Let’s Eat Together” series. Kaplan sets aside a portion of all sales to bring food to those in need, most often in Bridgeport.

“My brother owns DrewbaQ,” he said of the barbecue restaurant at 7146 Main St. in Trumbull. “Part of the money I donate is used to buy food at the Restaurant Depot. He cooks it for me and we go to one of the parks in Bridgeport, set up a table and give food to as many people as possible.”

“The book is called ‘Let’s Eat Together.’ We do what the book intended,” Kaplan said. “One day I would like to expand that program and have people eat with others different from them and giving back to their communities.”

“I’d like to help people as much as I can through my book sales – anybody who’s hungry,” he said. “When I think of kids going to bed hungry, it hurts my heart. Those are my goals, to try to help as many people as possible through my books.”