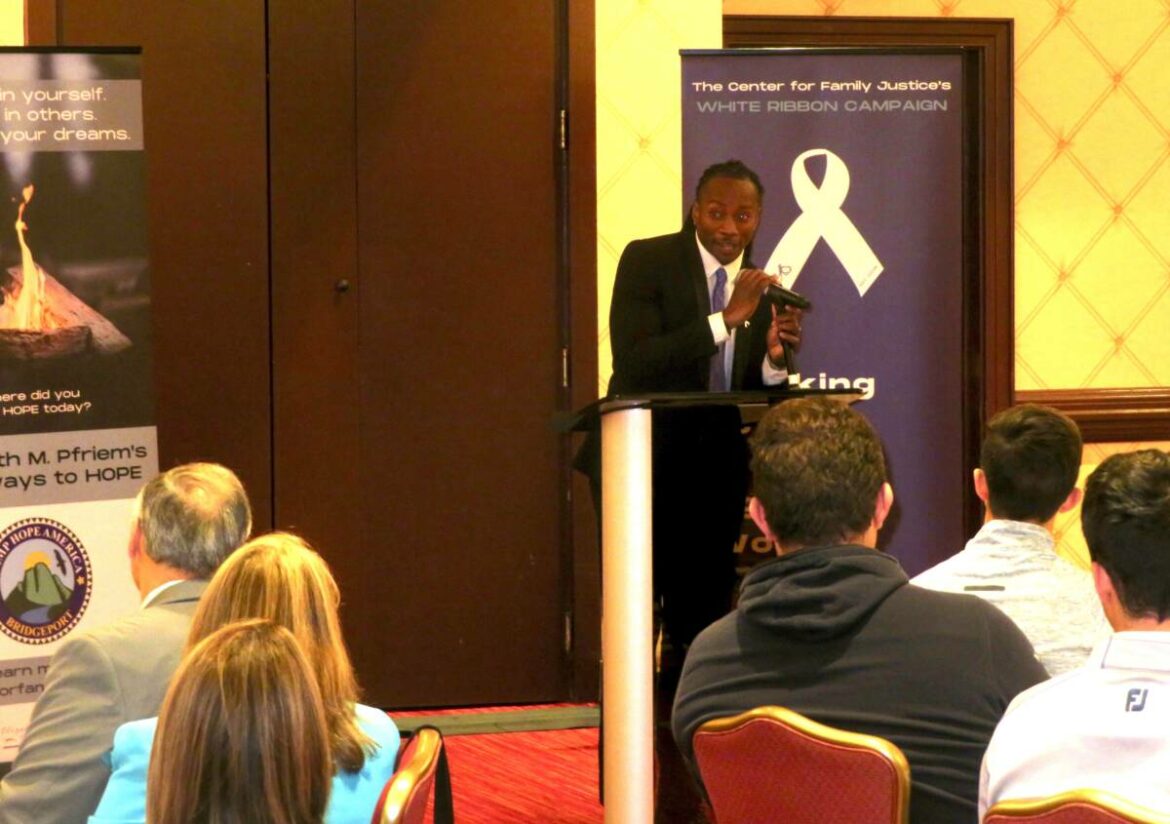 Jamal Stroud, founder of Big Homie Lil Homie, which offers mentoring for boys from fatherless homes, was the keynote speaker at The Center for Family Justice's Speaking With Men breakfast at the Trumbull Marriott Thursday.

TRUMBULL, CT — Jamal Stroud remembers the pain he felt as a little boy growing up in Brooklyn, N.Y., when he saw other school children being picked up by their parents. Stroud’s parents gave him up after allowing drug addiction to take over their lives. As a result, he had lived in six foster homes by the time he was six-years-old.

“Am I going to be with this family forever? Is it my fault? What’s wrong with me?” Stroud said of the thoughts that ran through his head growing up.

Stroud grew up wanting to make sure every boy had a father figure to know he is loved and valued. Stroud now lives in South Carolina, where he started the nonprofit Big Homie Lil Homie in the Greater Columbia area. Its male volunteers serve as mentors to at risk youth from single parent homes.

Stroud shared his story as the keynote speaker for The Center for Family Justice’s annual Speaking With Men breakfast at the Trumbull Marriott Thursday. The event is part of the White Ribbon Campaign, in which men and boys mobilize against domestic violence. 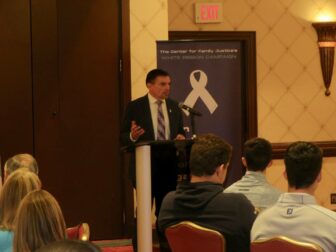 White Ribbon Committee Chairman Gary MacNamara, chief of public safety and executive director of Government Affairs at Sacred Heart University, told the audience how he became involved when he was police chief of the town of Fairfield and wanted to make a bigger impact against domestic violence.

Attendees of the breakfast included people from community organizations, businesses, as well as police officers. Among them was Monroe Police Chief John Salvatore.

The White Ribbon Campaign was started by a handful of men in Canada in the aftermath of a tragic shooting incident at the Ecole Polytechnique in Montreal on Dec. 6, 1989. Marc Lepine gunned down 14 female students and later claimed he was “fighting feminism.”

“Wearing a white ribbon is a personal pledge to never commit, condone or remain silent about violence against women and girls,” the site says.

CFJ points out that while 90 percent of abusers and rapists are men, most men are not abusive or violent. “To end domestic and sexual violence, men and boys need to be part of the solution and use their voice for change,” CFJ says. 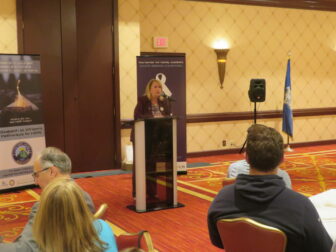 Deborah A. Greenwood, president and CEO of The Center for Family Justice, speaks at the annual Speaking With Men breakfast at the Trumbull Marriott Thursday.

Deborah A. Greenwood, president and CEO of CFJ, said domestic abuse cases rose by 25 percent, as more people worked from home during the COVID-19 pandemic.

The nonprofit is building Empower House, a new safe house for its clients, who are impacted by domestic violence and abuse. CFJ’s existing safe house is at 122 percent capacity due to heavy demand.

Alan Masarek, co-chair of the Empower House campaign, rode a bicycle from coast to coast on an epic journey across America to build support and awareness for this ambitious effort.

On Thursday, Greenwood honored Masarek with CFJ’s first annual Faces of Inspiration award for pedaling “to protect victims of abuse” from Portland, Ore., to Portland, Maine, from Aug. 18 to Oct. 3.

Masarek recalled a stop in Wyoming, at a bathroom “in the middle of nowhere.” He said a flier on the wall advertised resources for victims of domestic violence. He took a picture of it and posted it on his blog.

“It’s a national problem. It’s everywhere,” Masarek said of domestic violence, “and seeing that flier in the middle of nowhere really hit home.”

During the breakfast, a young man who attended CFJ’s Camp Hope America in Bridgeport as a survivor of abuse, spoke of how the camp taught him skills and empathy, instilling in him “an overwhelming passion to help others, so people know they’re not alone.”

“I’m extremely grateful for everyone who helped guide my way,” he said.

It’s all about relationships 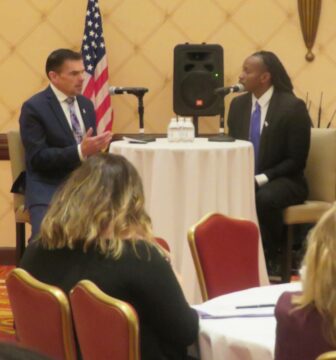 MacNamara interviewed Stroud at a table during the Speaking With Men breakfast and through his questioning, the audience learned Stroud’s first father figure was a virtual one. His role model was Uncle Phil on the TV sitcom, “The Fresh Prince of Bel-Air.”

In his neighborhood, Stroud saw young people sell drugs or play basketball in hopes of a better life. It was in high school, where a male teacher encouraged Stroud to look beyond Brooklyn.

“‘The world’s much bigger than Brooklyn, N.Y. You can go anywhere in this world,'” he told Stroud.

“He said I could do anything if I put my mind to it,” Stroud recalled, adding that is something all children need to hear.

He went on to graduate from high school and earn a Bachelor of Science degree in social sciences from Allen University and a master’s degree in mental health counseling from Lenoir-Rhyne University.

However, Stroud’s high school mentor was not the main reason he changed his path to pursue a better life. At age 10, one of his childhood friends was killed in a random shooting.

“That really opened my eyes,” Stroud recalled. “I didn’t want to go that way. I fought tooth and nail to get better. I wanted to change and give back to the community.”

After graduating from college, Stroud ran a summer program in 2016 and noticed no fathers came to pick up the kids. He only saw aunts, mothers, grandmothers and older sisters.

Stroud said he could not imagine not being there for his two children. “At times it’s frustrating,” he said of working with fatherless children, “because how can a man leave his responsibility?”

This inspired Stroud to start the nonprofit Big Homie Lil Homie. “I just had an idea,” he said. “This is my calling.”

The organization serves over 500 boys from fatherless homes, age six to 16, and there are 55 mentors.

Big Homie Lil Homie provides mentoring services, educational assistance with the goal of increasing GPAs and test scores, works to improve living standards for at-risk youths, and reduces the complications and low self-esteem that comes from a lack of moral support.

In one example, Stroud said a mentor could do something as simple as attending a child’s basketball game, so they see someone is there for them.

“I challenge any man who is here today to become a mentor,” he said. “Become somebody they can depend on. It’s not about money, it’s about your time.”

Stroud said establishing relationships is important to plant the seed for positive action that can change the world.