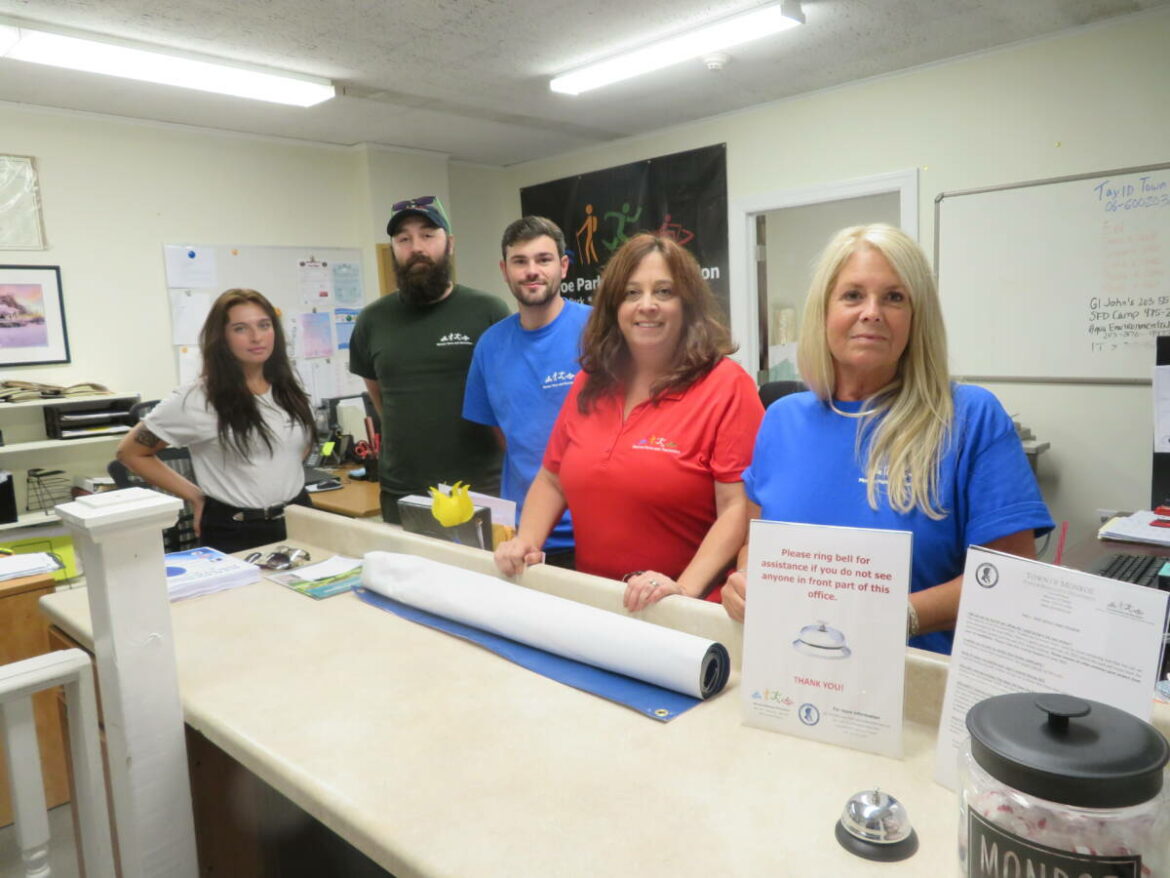 MONROE, CT — Longtime Parks and Recreation employee Kelly Cunningham was among those in the department who left for new opportunities this summer, and the park ranger position moved from the police department to parks and recreation following the retirement of David Solek.

“I’m ecstatic,” Orosz said. “It’s all new energy. They run with ideas I want to try. They’re very helpful to people they meet in the community, courteous and polite. It is a huge transition getting all new people.”

Orosz said her staff members are from different backgrounds, bringing fresh ideas to their positions.

Chris Tucci is the park ranger, Stacey Cossuto is the office aide, Viana Machnicz is the office administrator and Connor Negri is the recreation supervisor.

Because everyone was hired within a short period of time, Machnicz said they all can relate to each other’s situation, strengthening their team oriented approach.

When people first walk through the door of the Parks and Recreation Office at Monroe Town Hall, Stacey Cossuto is the smiling face they see.

“I work with people who come in,” she said. “They’re looking for park stickers, camping and picnic permits — and everybody’s happy to be here,” she added of the staff. “We’re all extremely happy to come here.”

Cossuto, who lives in Trumbull, has 12 years of experience in banking and 15 years as a ticket broker.

Connor Negri, who worked in the Guilford Parks and Recreation Department for just under five years, was looking for a closer commute to his home in Brookfield.

“I cut my hour-and-a-half commute to a half hour,” he said with a smile. “More time with life is nice.”

Negri served as a program coordinator, running the day-to-day programs on the shoreline. “I worked with lifeguards, hiring, supervising and teaching them our rules,” he said.

While Guilford has a beach, Monroe has Great Hollow Lake and the Wolfe Park pool. “I never worked with a pool,” Negri said. “The pool here is amazing.”

On his computer screen, Negri was designing a flier for Float Night, an event to be held at the Masuk High School pool, where the department runs indoor swim programs. Float Night is scheduled for Oct. 28.

“We oversee all the programs,” Negri said of Orosz and himself, adding of the department, “we’re a team here. All hands on deck, helping each other out.”

Programs are seasonal, held in the spring, summer, winter and fall. “We try to bring back the favorites and expand on things,” Negri said.

Negri was hired in May. Orosz said the summer is the busiest month, so Negri oversaw programs already in place, though he filled two-of-the-last-three Movie Nights.

“Now he can put his spin on it,” Orosz said of next season. For example, next year Negri will pick all of the characters and entertainers for the Character Nights at the park, Orosz said.

Chris Tucci, a graduate of Masuk High School’s Class of 2011, still lives in town, but before being hired as Monroe’s new park ranger on Aug. 8, he had worked in different parts of the country.

Tucci first job in the field was as a park ranger and trail guide in New Mexico.

“I would guide and supervise groups of 14 people for two weeks at a time, making sure bears stayed away and ensuring people were staying healthy on the trail,” Tucci said.

A year later, he worked for the state of North Dakota, at Fort Stephenson State Park, serving as an all-around-ranger, doing maintenance, supervising camp grounds and enforcing rules.

Then Tucci was a back country maintenance ranger in Annapolis, Md., before being hired for his most recent job as a recreational and flood control maintenance ranger for Hop Brook Lake, covering properties in Middle-bury and Plymouth, along with a hurricane barrier in Stamford.

Now that Tucci works in Monroe, his commute is five-to-10 minutes. He has worked in parks ranging from 200 to 300 acres. By contrast, Tucci said Monroe’s parks are a lot smaller and more densely populated.

“I meet a lot more people,” he said of his hometown. “It’s a close knit community.”

In Monroe, Tucci enforces park rules and checks for permits at campsites, picnic areas and the Lake Zoar Boat Ramp.

Orosz said Tucci has assisted with parking on concert nights at Wolfe Park, checked field permits and will assist Boys Scouts and Girl Scouts with the coordination of Eagle, Gold and Silver projects on town properties.

Tucci will also help with the organizing of the town’s annual Arbor Day celebration, according to Orosz.

“We also want outdoor education programs,” she said. “He helps with general surveillance of the area. Sometimes visitors don’t know the rules and Chris gently reminds them of the signs.”

She said Tucci has given out bandaids to hikers for minor cuts and scrapes, found lost items on the trails, and guided visitors to picnic areas and campsites.

“It’s very nice to have an adult at the park when there’s a lot of use,” Orosz said. “Connor and I can’t always be there. He’s getting to know people and they will seek him out.”

She gets the lingo

Viana Machnicz lives in Shelton, where she graduated from Shelton High School and went on to serve the city as a municipal employee.

Machnicz worked in the Aquatics Department for six years, eventually moving up to the main office of the Parks and Recreation Department.

She worked under the parks and recreation director for four years, before being offered a position in the records department of the Shelton Police Department.

When she learned of openings in the Monroe Parks and Recreation Department, Machnicz said she saw an opportunity to return to her roots, gaining more knowledge in the field of parks and recreation.

Machnicz brings her past knowledge and experience to Monroe, so she said she was already familiar with the lingo used in the field.

Machnicz said she considers the position of office administrator to be the backbone of the Monroe Parks and Recreation Department.

As office administrator, Machnicz keeps the department organized, and understands the fine details of programs and budget analysis. She will work closely with Orosz in preparing annual parks and recreation budgets.

“I absolutely love it,” Machnicz said. “Quite frankly, I’m happy with my decision. I can grow where I’m valued and can come into work and give 100 percent every day.”