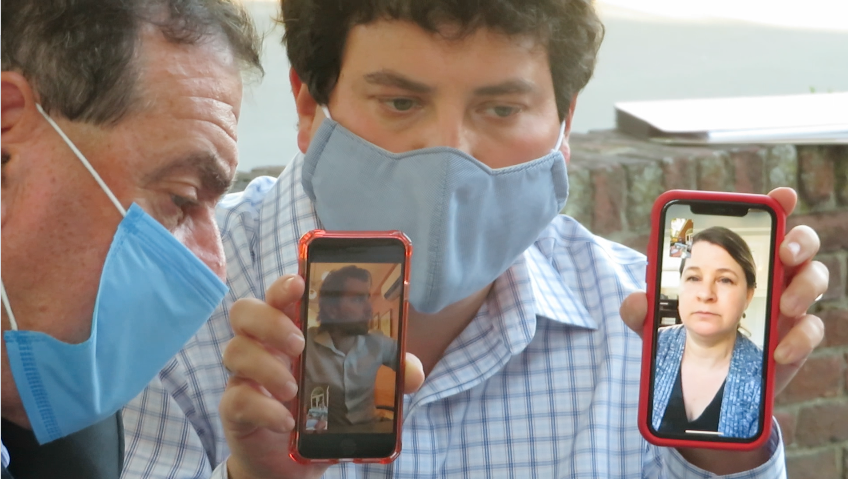 Monroe Architectural Review Board members are fine with all of that. It’s just the flat roof they have a problem with.

“Make it a colonial roofline somehow and we’re good to go,” Raymond Ganser, a board member, said during a special meeting held on a patio outside Town Hall Tuesday.

The ARB is an advisory board that reviews architectural designs for buildings and writes letters of recommendation to the Planning and Zoning Commission to consider when it reviews site plan applications. 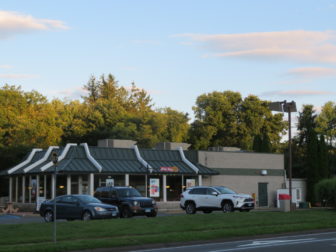 McDonald’s has a restaurant at 390 Monroe Turnpike.

Raymond Rizio, an attorney for McDonald’s, said the restaurant at 390 Monroe Turnpike was recently bought by the Trefz company, which plans to invest between $500,000 and $750,000 in a total renovation of the exterior and interior of the building.

Though the building’s footprint would remain the same, the plan includes an expansion to a double drive-thru to improve efficiency and avoid lines leaking onto Route 111 during busy periods. Two parking spaces would be made into parallel spaces to make room for a second lane.

When the Monroe restaurant was built years ago, Rizio said around 30 percent of its business was drive-thru. That rose to 70-percent, even before the COVID-19 pandemic, which drove it up to 85 percent.

Rizio said McDonald’s is all about efficiency, adding a goal for all of its franchises is for it to take no longer than 120 and 180 seconds from the time you order, to the time you get your food. 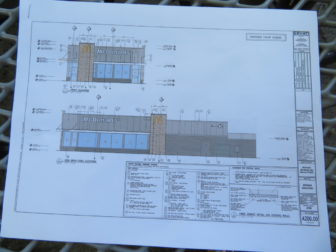 Architectural plans for McDonald’s show how it would look after they gut the building for an interior renovation and reface the outside.

Rizio said McDonald’s restaurants across the country are undergoing renovations. He recently handled applications for restaurants in Greenwich, Simsbury, Westport and Fairfield.

“The windows are prominent,” he said. “The siding is prominent. The look of a chimney is prominent and it has a nice, good, sleek, clean look without being contemporary.”

Rizio said he believes the Monroe restaurant is dated and the renovation project will bring a huge improvement in the efficiency and appearance of the building, making it more consistent with some other buildings in the area. Though its roof would be flat, he said Walgreens has a flat roof and is an attractive building. 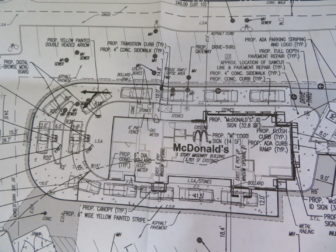 Vehicles would start in one lane, then break off into two in McDonald’s double drive-thru. Drivers would place orders using menu signs in each lane, before going back to one lane, leading to a pay window and a pick up window.

“We feel it fits in perfectly as you move up Monroe Turnpike and is a nice entryway as you transition to the center of the business district,” Rizio said of the proposal. “I think it’s a huge improvement. It’s another big investment in this location. It modernizes a building that’s kind of really out of character as it exists. [Now] I think it still looks like it’s from the 50s and 60s.”

Cathleen Lindstrom, a board member, said, “my opinion, I’m not very big on flat roofs or very modern buildings.”

Ganser pointed at Edith Wheeler Memorial Library next door and said to Rizio, “see that building over there? It’s a beautiful colonial-type building. That’s what we’re trying to introduce into the town of Monroe.”

Rizio said Monroe’s McDonald’s already has a flat roof. “There’s an awning and we’re just taking that off,” he said.

Ganser pointed out that the building was built before the ARB was formed. Lindstrom said what’s there now would look better if the white materials of the mansard roof were removed.

This is not the first time McDonald’s and town land use boards were at odds over the fast food chain’s brand identity and Monroe’s goal of colonial-style buildings.

Chairman John Rosen recalled how McDonald’s “dug its heels in” when town officials made “minor requests” to make its application for a new building on Main Street look more colonial. Rizio said the successful restaurant chain has a brand it wants to protect.

That building was approved, but never built.

Attorney Chris Russo, who also represents McDonald’s, held up two cell phones throughout the meeting, so their clients could participate remotely. Among them was 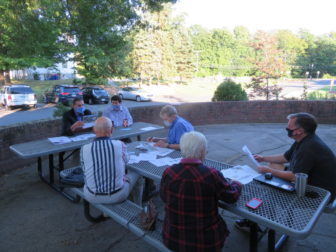 Moskal said he could draw something up over the next two weeks to make the roof appear more colonial. Russo said any changes will need approval from corporate.

When the McDonald’s Real Estate Company comes before the ARB again, the attorneys were asked to bring the lighting plan for its review. ARB members also asked that the roof design hide the building’s mechanicals.