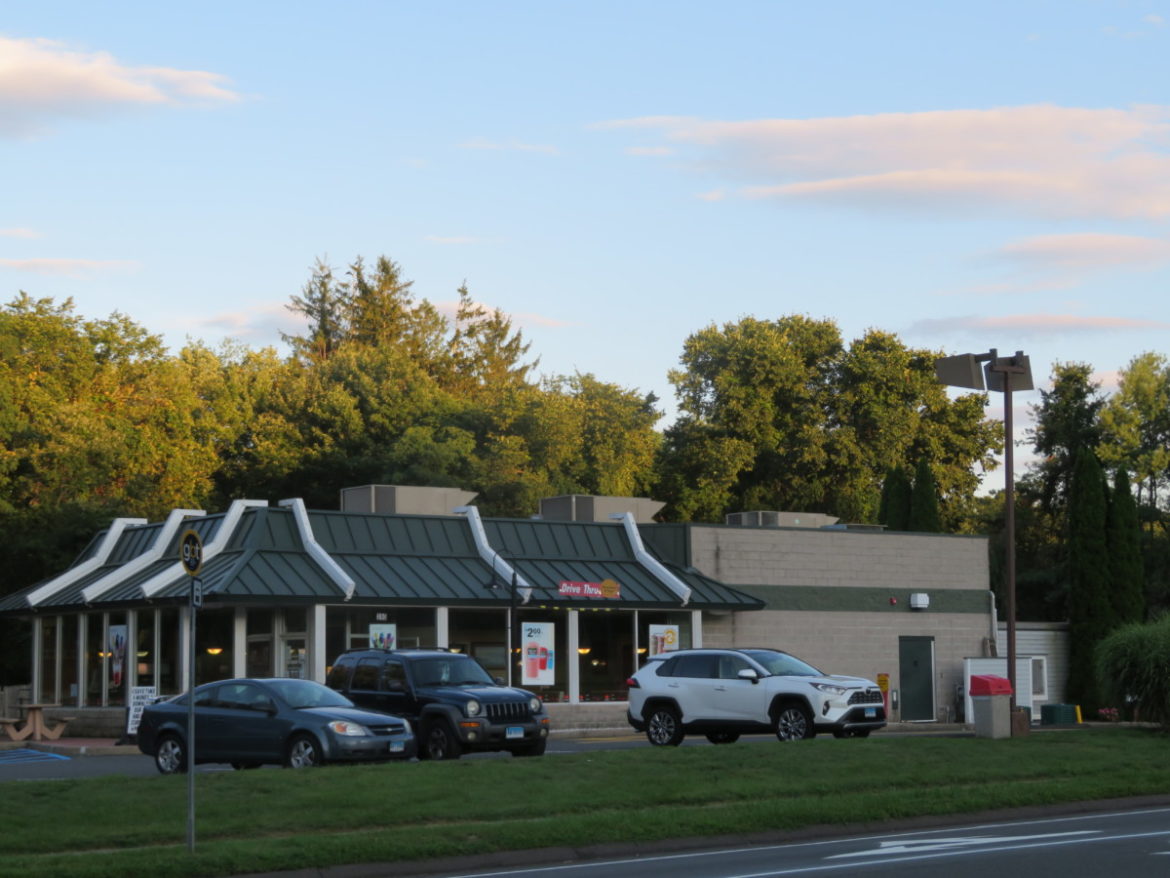 The McDonald's restaurant at 390 Monroe Turnpike was built around 1994. The fast food chain wants to update the facade and add a double drive-thru.

MONROE, CT — An attorney for McDonald’s presented a plan to the Planning and Zoning Commission to convert the drive-thru of its Monroe Turnpike restaurant to two lanes and modernize the building’s facade.

Though a significant number of patrons dined inside the restaurant over the years after it was built at 390 Monroe Turnpike around 1994, Attorney Christopher Russo said that has since flipped in favor of drive-thru orders.

Russo said 75 percent of customers used the drive-thru, climbing to 100 percent during the COVID-19 pandemic. It has since leveled off to 80 to 85 percent drive-thru, according to Russo.

“It is definitely a drive-thru business now,” he told the commission during a hearing last Thursday. “Even Uber Eats. It may surprise people that McDonald’s is one of the top restaurants on Uber Eats.”

McDonald’s plans to reconfigure its existing space to allow room for the double drive-thru. Russo, who is the attorney for McDonald’s Real Estate Company, said the footprint of the building will not change.

The fast food chain is seeking approvals for a special exception permit and a site plan.

“A double drive-thru lane helps us to take orders more quickly and efficiently, while reducing the backup people have seen during its peak times,” Russo explained.

He said a double drive-thru would be able to queue 13 to 14 cars.

The drive-thru would split into two lanes, each with a small pre-browse menu and a digital main menu. Once orders are taken, the two lanes will merge into one, where drivers will get their food from the pickup window and pay.

“These menu boards are a great help to increase the efficiency of the drive-thru,” Russo said. “The pre-browse menus allow drivers to see what the popular main items most patrons order are.”

He said it helps drivers decide what they want as they approach the main menu to place their order.

Russo said the pre-browse menus would be small, “only 10-square-feet,” and because the main menus will be digital, he said breakfast, lunch and specialty items will not have to be displayed at the same time — meaning the menu can be smaller.

“The existing menu boards are 43-square-feet and we’re going to reduce that by more than half to 19.7-square-feet,” Russo said.

Nicole Lupo, a commissioner, expressed support for the proposed upgrades, but asked for further explanation of how the double drive-thru would fit on the site.

Russo said four parking spaces would become parallel spaces to allow more room for the lanes to go around the building. The spaces could be restricted to employees only, so it would be easier to move cars when needed.

For instance, Russo said trucks are there early in the morning for deliveries and trash pickups. If a delivery ran late, he said employees could move their cars to make room.

But if the commission wants, Russo said town zoning regulations allow a property owner to designate 15 percent of parking spaces as deferred, which would not be used, but would be available to meet future demand.

In this case, 15 percent would allow McDonald’s to defer those four spaces.

“We would happily accept that as a condition of approval, which means they would remain, but the painted stripes would be removed,” Russo said.

Lupo said she wants the parking spaces to be deferred, adding this would also be better for emergency vehicles trying to get through.

Domenic J. Paniccia, a commission alternate, asked if there were any safeguards to ensure cars in the double drive-thru would proceed safely. He wondered what would happen if two drivers gave their orders and were ready to merge into one lane at the same time.

Russo said the drivers would be proceeding from a stopped position, would see each other, and would be driving at a slow enough speed to safely merge.

“It ends up working out that they leave alternately, because I think the same employee will deal with them, one-after-the-other,” Russo said of taking customers’ orders.

Paniccia asked Russo if McDonald’s would consider putting up a sign that says, “caution, cars merging.”

“Sure, I could talk to them about doing something like that,” Russo said.

Ryan Condon, the commission secretary, said of the two drive-thru lanes, “I assume they won’t release cars at the same time. I think they would have to stagger those vehicles, so merging shouldn’t be a problem. I could be wrong.”

Condon also said eliminating the four parking spaces would make it easier for truck drivers to maneuver through the drive-thru to place orders.

Monroe is not the only town where McDonald’s is renovating the facade of its restaurant and adding a double drive-thru.

“McDonald’s has been doing these renovations throughout Connecticut to better address their drive-thru customers,” Russo said. “We’ve done them in Greenwich, Westport, Fairfield, Simsbury, Newington and now we’re here for Monroe.”

Russo has a law practice with Raymond Rizio in Fairfield and the two attorneys have attended several meetings with the Monroe Architectural Review Board on renovations to McDonald’s building.

“It’s just an updated look to what is currently a dated restaurant,” Russo said. “The ARB asked us to leave a portion of the metal roof system that’s there now. They asked that it remain, so Monroe has a unique feature.”

Russo said the green color of the roof will change to match the updated color scheme. The building will have the same number of windows in the refacing and updating of the exterior.

Town Planner Rick Schultz said the hearing could be continued to April 8, so the applicant can show clean drawings with the four parking spaces removed and the introduction of the merging signs.

The commission agreed and continued the hearing to that date.