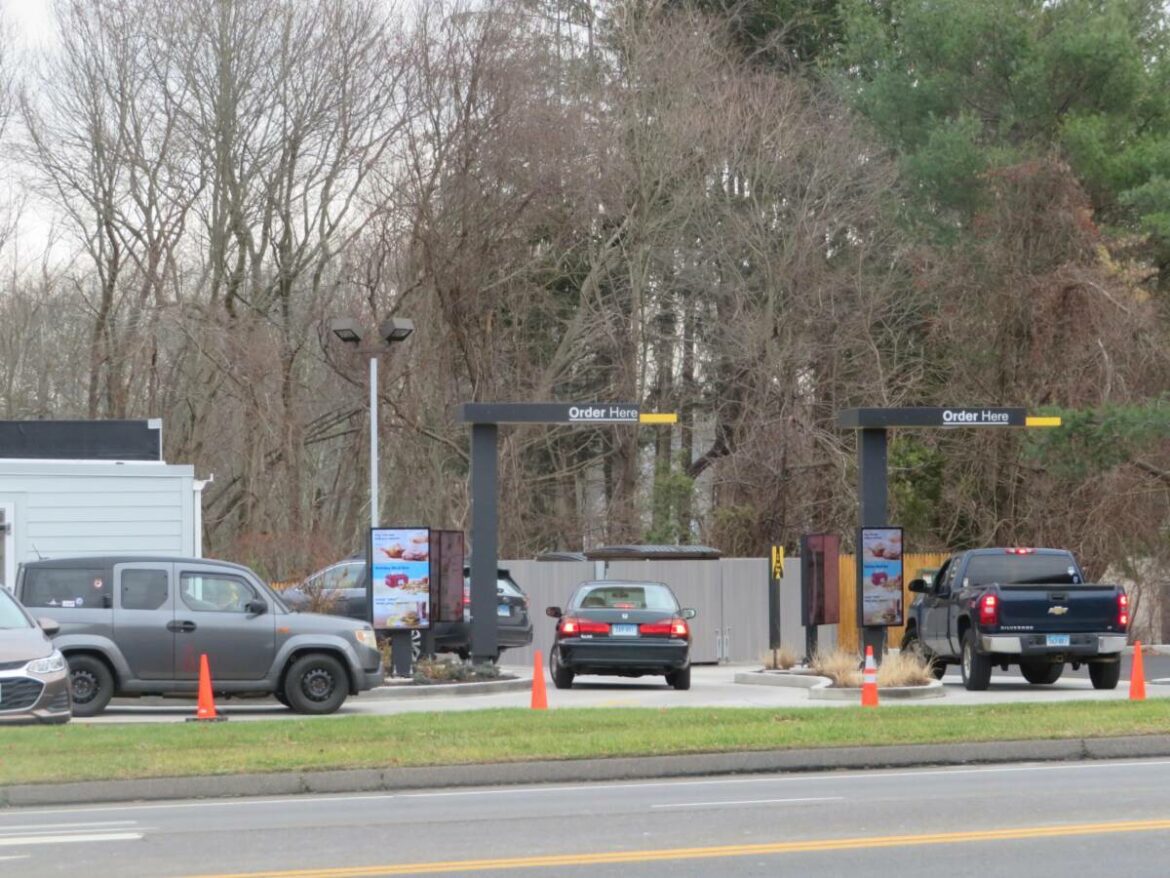 Traffic appears to move smoothly through the double drive-thru at McDonald's, 390 Monroe Turnpike Friday afternoon, but it has been congested at times as drivers get used to it.

MONROE, CT — McDonald’s new double drive-thru is meant to speed up ordering and prevent lines from backing up onto Monroe Turnpike at lunchtime, but the new design has been confusing some drivers and jamming up lanes in the restaurant’s parking lot.

On Thursday, representatives for Trefz Corporation, which owns McDonald’s locations in Connecticut and New York, spoke at the Planning and Zoning Commission meeting. They asked for patience to allow patrons to get used to it.

The commission asked them to come up with a signage and marking plan to improve traffic flow for the double drive-thru, which has been open since Oct. 15. 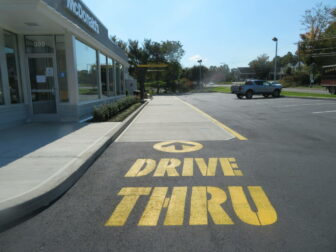 The new double drive-thru is the highlight of the renovation of the McDonald’s at 390 Monroe Turnpike in Monroe.

Among the complaints aired on the Monroe, CT Residents Facebook page, some drivers freeze up when the line splits into two lanes and the two menu boards come into view, so impatient people behind them use the bypass lane to pass them and place their order.

Other times, drivers all go to the left to order, rather than using both lanes. Whenever cars use the bypass lane or break into two lanes too early, it can block the parked cars of drivers dining inside and impede traffic flow in the parking lot.

Robert Westlund, a commission member, said he drove by the restaurant at 390 Monroe Turnpike recently and saw cars backed up onto Route 111.

Attorney Chris Russo said his client, Trefz Corporation, owns other restaurants with similarly constructed drive-thrus that have no issues. He added there have been no accidents at the Monroe location.

“We’re trying to educate people. We put up traffic cones,” Russo said. “We took the extra step of having a person out there.”

Carmine Versaci, director of operations for the Trefz Corporation, said people will get used to the double drive-thru. He also contends the cones impede it from working the way it is supposed to.

“Carmine is concerned the cones affect the way drive-thru works,” Russo said. “We put up the cones for the commission. The commission may feel comfortable giving up a space if we angle a spot.” 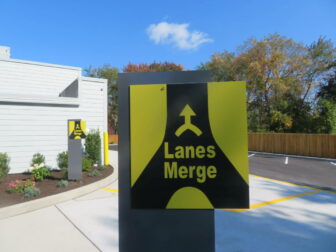 Versaci said a re-striping of parking spaces for better angling could take place in March, after the winter.

“I think it would behoove you, in the spirit of cooperation, to have a new signage and markings plan,” Schultz said.

Russo asked if the commission would be comfortable removing the cones, but Leon Ambrosey, a commissioner, said McDonald’s may want to leave the cones up until they have a signage and markings plan.

Town Planner Rick Schultz said, as part of the approval for McDonald’s multimillion dollar renovation, which included the double drive-thru, it agreed to put in a separation to prevent drivers from cutting each other when the drive-thru splits into two lanes.

“Obviously we ran into problems. That’s why they have the cones,” Schultz said. “McDonald’s is here to say they’ve got it under control. They do not want the upright barriers, because of maintenance and snow removal.” 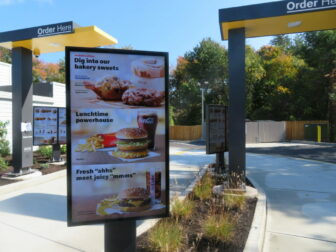 “We have staff out there directing,” Russo said. “When you have obstructions in the drive-thru lane with a marker, it’s like the solution is worse than the problem.”

He said a permanent marker or structure will inevitably be hit and hit repeatedly. “We lost a few traffic cones,” Russo added.

One city McDonald’s is in required a triangular island curb. Russo said McDonald’s put in the island, which was hit repeatedly by drivers.

“They told us to paint it yellow. It was still hit,” Russo said. “Now the island is bright canary yellow and it’s still hit. That’s why McDonald’s doesn’t want to build a permanent marker or structure — and there would be issues with a snow plow coming with that sticking out there.”

“I agree. A permanent marker or structure is more of a problem,” said Domenic J. Paniccia, a commission alternate.

“I tend to agree with that,” said Dominic Smeraglino, another alternate.

“An island in a parking lot already congested is not a solution, but I’ve seen traffic backed up,” Westlund said.

Westlund asked about putting in large reflective posts that move to prevent damage. But Russo said that could damage cars.

Versace asked the commission for more time, before requiring McDonald’s to take action on the drive-thru.

“We had a discussion that this could be a problem with people cutting in,” Ambrosey said. “People who went there couldn’t back out of their parking spaces.”

Ambrosey said people posted on Facebook about arguments in the parking lot. “That’s why you had someone there,” he said. “That was my main concern.” 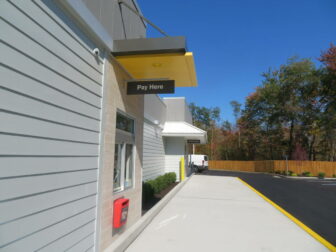 “We’re always happy to come back and find a way to improve it,” Russo said. “This has been open a short period of time, so we want to see how things go over the next few months. Things have already started to improve.”

Russo said there is a thorough process whenever McDonald’s puts in a change to a site plan.

“They are masters at that,” he said. “They make it as efficient and as fast as they can. McDonald’s whole thing is you get on the site, get your food and you leave — they don’t want you there one second longer than you need to be.”