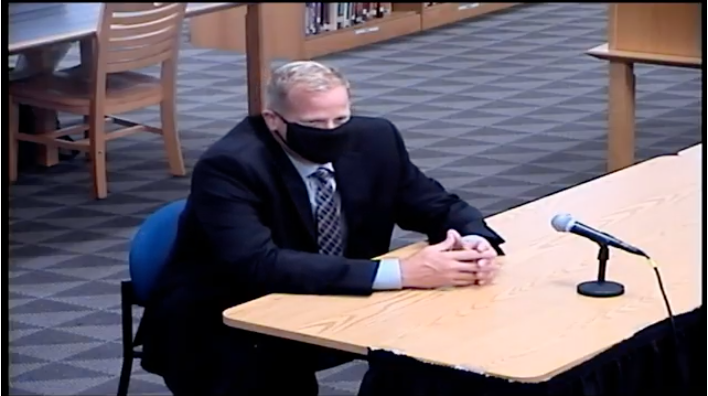 Masuk High School's new principal, Steven Swensen, introduces himself to the Board of Education at its meeting Monday night.

MONROE, CT — Steven Swensen was hired as the new principal of Masuk High School after holding the same position at Windsor Locks High since 2014.

“What you’re getting in me is someone who is dedicated to teaching and learning,” Swensen told the Board of Education at its meeting Monday night, “and I’m going to do everything I can to support an already excellent staff at Masuk.”

Swensen said education is all about building relationships, adding he is excited to meet the staff, students and people in town.

Of the educators he has yet to meet, Swensen said, “I can only hope that everybody I continue to meet are as qualified and professional as the people I’ve already met. Thank you for this opportunity.”

The Masuk High School Principal Search Committee was composed of teachers, parents, Board of Education members, and administrators. The initial pool of applicants was narrowed down to five finalists who were interviewed by the search committee.

Kobza thanked Board of Education members, Chairwoman Donna Lane, Nick Kapoor and Dr. Alan Vaglivelo for their participation on the committee. He said they worked with he and Interim Assistant Superintendent Jack Ceccolini to screen resumes and conduct seven hours of interviews with the finalists.

“The committee was extremely impressed with Mr. Swensen’s qualifications and experience, especially as one of his references referred to him as, ‘A learning leader, who works alongside staff, parents, and students to move the school’s goals forward,’ according to a press release from central office Monday.

Kobza said Swensen believes in education everything stems from building strong relationships with staff, students, families, and the community. His primary goals will be to get acclimated to the school and community as quickly as possible to support the reopening of school for students and staff.

This month, Swensen will replace former principal Jacob Greenwood, who is now serving as principal of Ridgefield High School.

Prior to his time in Windsor Locks, Swensen served as a housemaster at Shelton High School and was a mathematics teacher and dean of students at Avon High School.

He holds a B.A. degree from Southeastern College, an M.A. degree in “Technology in the Classroom” and an educational leadership degree from the University of Connecticut.

As part of the district’s leadership plan, Julia Strong will assume the role of STEM director/Jockey Hollow assistant principal, filling the role vacated by Leigh Ances when she was appointed principal of Fawn Hollow Elementary School.

“I can unequivocally say that Julia is one of the most capable administrators I’ve ever worked with and I know she will be a tremendous asset in that position,” Kobza said.

He said the district will look for someone with instructional leadership to fill Strong’s former position as an assistant principal at Masuk.