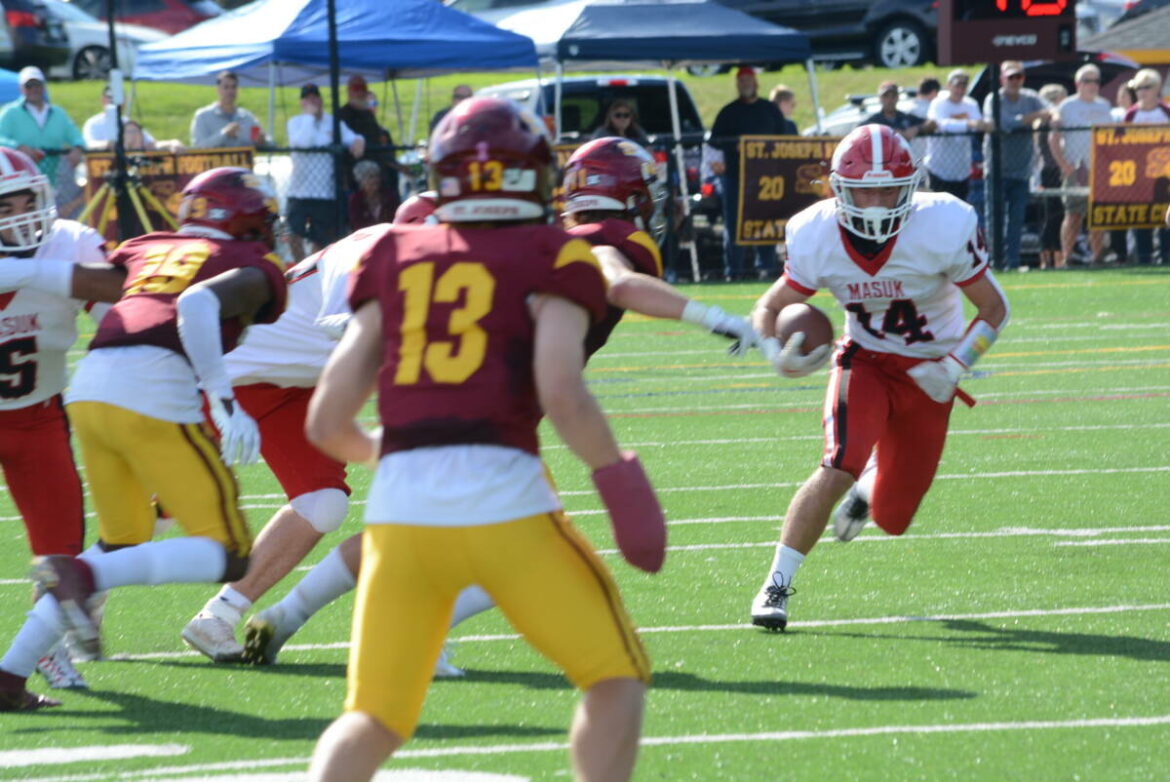 TRUMBULL, CT — For the second time in three weeks, Masuk High’s football team faced a top-10 Connecticut team. And in each of those games, it went down to the wire with Masuk’s opponent coming out on top despite a spirited effort by the Panthers. The latest was a 24-21 setback to St. Joseph’s on the road Saturday afternoon.

Down 24-7 in the fourth quarter, Masuk rallied to score two touchdowns and got the ball back with enough time to drive to St. Joes’ 24 yard line. A 41-yard field goal attempt by freshman Jackson Zylick grazed the cross bar, coming up just inches short with a few seconds left on the clock.

“Last year we won these games. This year we will win these games later on,” said Masuk Coach Steve Christy, referring to a 2021 season that featured the Panthers coming from behind to pull out some close games in the waning seconds. 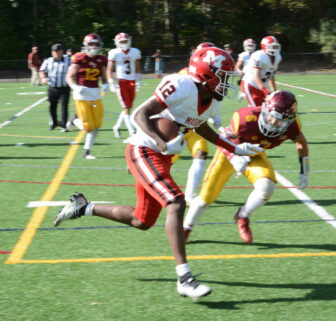 Christy noted that this year’s version of the Panthers is very young, led in large part by sophomores.

Zylick not only came oh so close to knotting the score, but the kicker booted two excellent onside kicks after late-game TDs, which the Panthers had a chance to recover only to see the host Cadets pounce on the ball both times.

“Two great onside kicks. If we recover one of the two we win the game,” Christy said.

“Offensively, we need to be better,” said Masuk’s coach, pointing out that turnovers hurt his squad in this one.

Masuk was down 10-7 at the half with Jason Champagne’s touchdown run accounting for the only points Masuk would get until late in the game.

The Cadets built a 17-point lead before the Panthers began to rally. It all started with a Nick Fox fumble recovery at the Masuk 36 yard line early in the fourth quarter.

Gavin Walker scored on a 13-yard touchdown run with 8:03 left in the game. The Panthers forced a St. Joes punt and took over at their own 12 yard line with five minutes to play. Dylan Jackson completed passes to Walker and Deven Roche to set up a five-yard Walker TD run with 3:55 left. 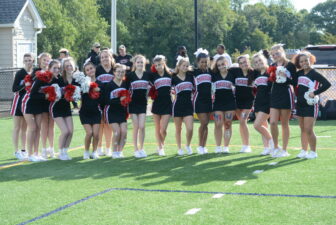 Still plenty of time, but the aggressive Panthers opted for another onside kick. The Masuk defense stepped up yet again. The Cadets moved the ball to the Masuk 26 but on fourth and six, a pass attempt was broken up by a diving Chris Bouton, giving Masuk the ball with 1:58 to go.

The Panthers marched to the Cadet 24 yard line on 10 plays, including several quick sideline route passes and some Champagne runs.

In addition to Gavin Walker coming up with timely receptions, receiver Shane Walker made some big plays.

“I’m not surprised. This team is full of fight,” Christy said of his Panthers battling back and nearly pulling this off. 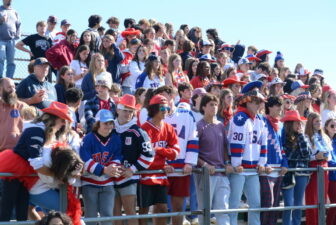 Students dressed in a red, white and blue theme while watching the Panthers and Cadets battle on Saturday.

“This one’s gonna hurt,” said Christy, whose team recovered from a last-second Trumbull comeback, a wild 49-43 outcome in week one, with a 38-0 win over South-West Conference opponent Notre Dame-Fairfield in week two.

Masuk will look to rebound again in a contest at New Milford (Friday, Sept. 30, at 7 p.m.)

Both of the Panthers’ losses were to tough, ranked teams, Christy noted.

“I ask you this: Who wants to play us right now?” the coach said.

Masuk’s future looks bright, Christy noted, adding, “everyone in the state will know who we are.”