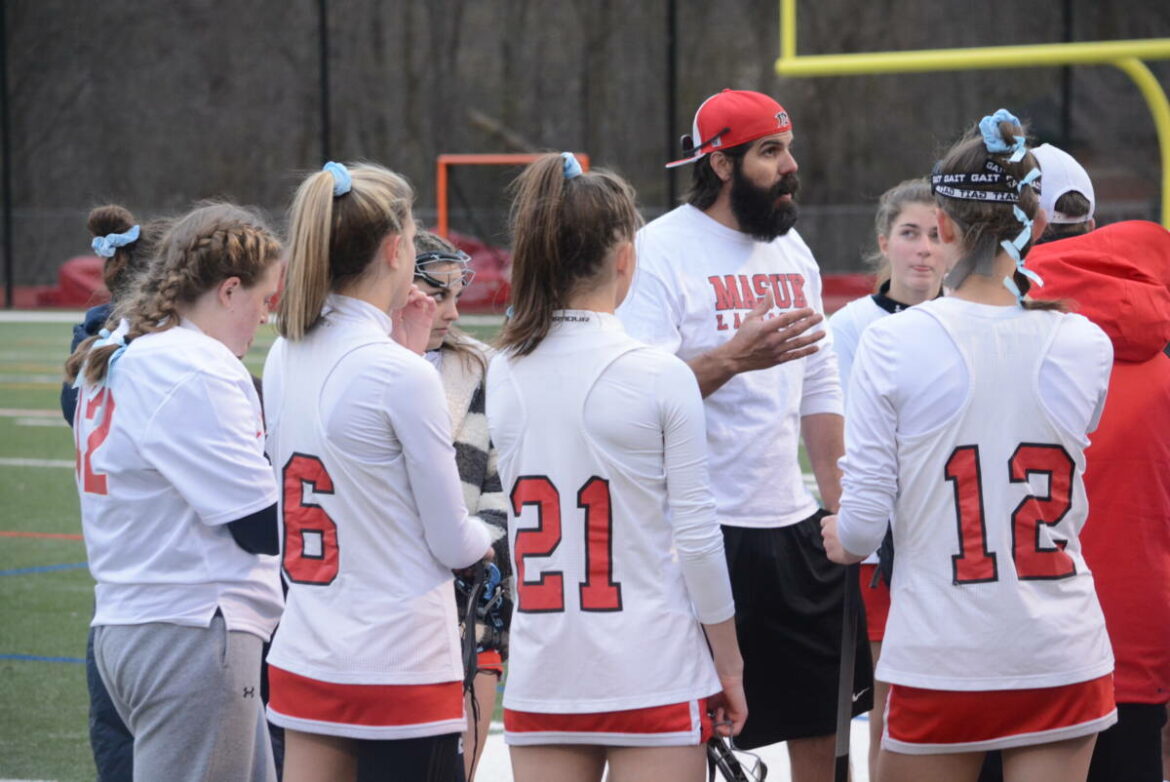 Coach Rob Troesser talks strategy with the girls' lacrosse team during a game this spring.

MONROE, CT — The South-West Conference playoffs are underway for some of Masuk High’s sports teams with the playoffs set to get going for others.

On the tennis courts, coming off a 4-3 win over Immaculate on May 17, which pushed the Masuk girls tennis team to a 6-5 overall mark, the Panthers began SWC tourney action on May 19.

In doubles play, the top tandem of Melanie Antony and Elana Kanjo went in as the eighth seed, No. 2 Chloe Norton and Lelia Giampe the seventh seed, and No. three partners Madison Poisson and Samantha Davoren are also the seventh seed.

Tournament play is set to continue for girls and boys on Monday, May 23.

The girls lacrosse team, seeded fourth, hosted Bunnell-Stratford in the May 19 quarterfinals and won 12-2. The top team in the SWC is Weston, followed by New Fairfield and Newtown, all of which lost just once in conference play. Masuk only had three defeats in SWC action this spring.

Masuk’s softball team is the top seed in the SWC playoffs and will host No. 8 Notre Dame-Fairfield Saturday, May 21, at 12:30 p.m. The Panthers blanked Notre Dame 13-0 in the regular season. Masuk completed its unbeaten play in SWC action with an 8-4 win over Newtown on May 18. Newtown earned the second seed.

In the win over Newtown, Kathryn Gallant had two hits and two RBI. In the pitcher’s circle, Gallant allowed six hits and one walk and struck out 15. Isabel Viglione and Ava Morretti both drove in two, and Natalie Lieto doubled and homered.

The baseball team will host Bethel in the first round of the SWC tourney on Saturday at 12 p.m. Masuk is coming off a 5-4 setback at Newtown on May 18. The Panthers fell behind 5-0 before nearly clawing all the way back.

Kaige Garrity had two hits, including a triple, and two runs batted in. Sean Minnick had a hit and RBI, and Max Pizzolato had a walk and RBI. On the mound, Quinn McGuire pitched four innings of one-hit, scoreless ball, striking out six along the way.

Masuk’s runners, jumpers and throwers will put their best feet forward in the SWC championships as the girls and boys compete against the best in the conference in the championship meet, at New Milford High, Tuesday, May 24, at 3 p.m.

Masuk’s boys’ volleyball team will visit Newtown in the SWC semifinals on Wednesday, May 25, at 4 p.m. Masuk is coming off seven consecutive victories to close out the regular slate.

On the girls’ golf course, the Panthers will take on their SWC rivals in the championships on a date to be determined in late May or early June. The Panthers visited Newtown on May 18 and fell 211-188. Elissa Campos shot a 49, Kate Wittenauer had a 51, Izzy Roy 55, Carrie Wittenauer 56 and Lauren Breyan 58.