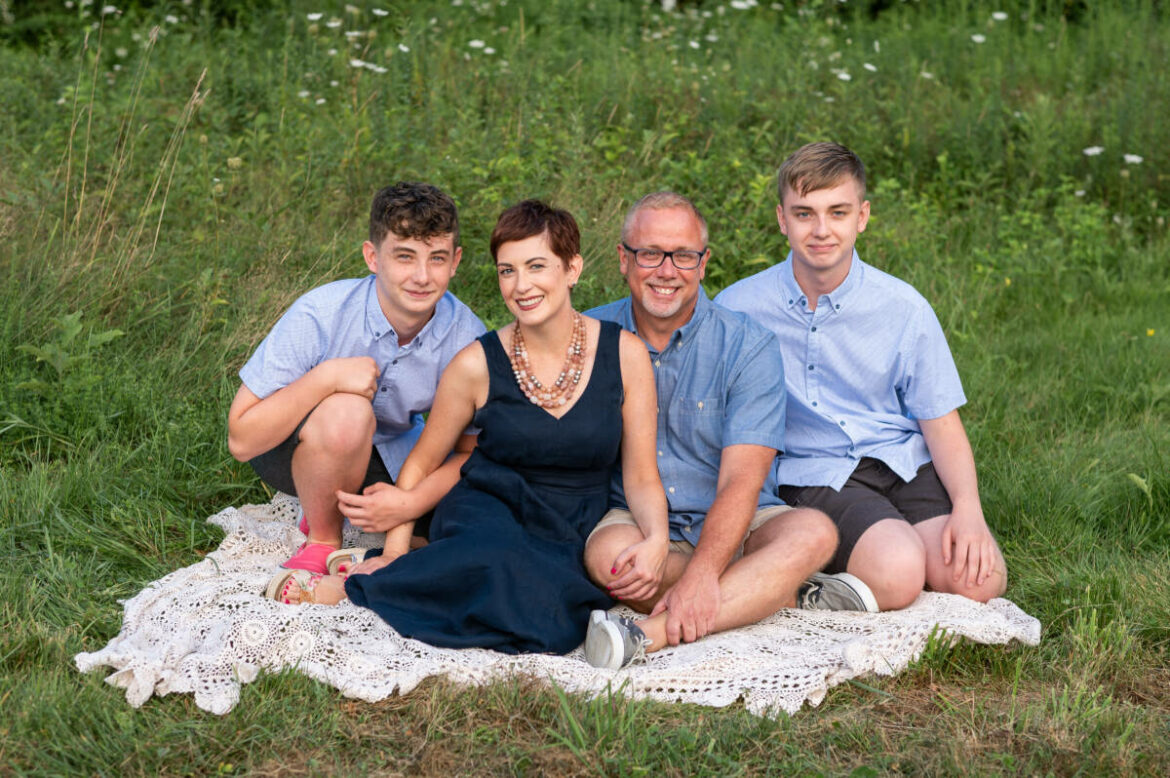 Maxton Busa, 15, left, with, from left, his mother Sandra, father, Jim and brother, Ethan, 17. Maxton, who has low vision will be able to drive in Connecticut after passage of Senate Bill 333 this week.

MONROE, CT – Maxton Busa is a freshman at Masuk High School and a member of the school’s wrestling team. Since he turned 15 this year, he and his friends started looking forward to getting their driver’s licenses while dreaming of their first cars.

“I want one of those ’80s Beetles or a Tesla,” Busa said during a phone interview Tuesday evening.

If his family lived in almost any other state in the U.S., Busa could start studying for his driving test to get his license by age 16. But Connecticut is one of five states that does not allow citizens with bioptic lenses to apply for a driver’s license. The other four are Utah, Iowa, Maine and Washington, D.C.

Years ago, Busa was diagnosed with Stargardt’s disease, a rare condition that causes low and deteriorating vision in young people, usually showing up by age 10. Macular degeneration is more common among senior citizens.

Busa’s mother, Sandra, describes his condition as a “classic case” of Stargardt’s disease. He experienced a sudden drop in his vision, it plateaued, then there was incremental vision loss over the years.

“There has not been much change the last few years,” Sandra said. “He’s an excellent candidate to be able to drive with bioptics.”

Sandra said advancements in technology and treatments allow people with low vision to lead normal lives, as evidenced by most states allowing them to drive.

“I definitely think I can drive,” Max Busa said.

Sandra turned to State Rep. Tony Scott, R-Monroe, for help and Scott came before the Transportation Committee to propose a revision to Bill No. 5366, which would allow people with bioptic lenses to obtain a driver’s license on a case-by-case basis with vision testing and regulations in place.

Sandra said Scott did not hesitate to offer his assistance.

“I am so incredibly grateful to him for being willing to take something up that doesn’t necessarily impact a majority of his constituents,” she said. “It wasn’t like he had tons of people banging on his door for help. He had one woman, me, knocking on his door.”

“I appreciate everyone doing what they can to get this law passed,” Max Busa said, adding of Scott, “it’s amazing of him to do that. I think it’s pretty awesome.”

“This is what I’m doing this for – the people,” Scott said. “This is something affecting him a negative way and preventing him from doing the normal things kids can do.”

Scott noted that many other citizens in Connecticut could also be eligible to obtain their driver’s license if the bill passes.

Sandra Busa and her son Max will be among those testifying on the bill before the Transportation Committee during a public hearing today (Wednesday) at 11 a.m.

Scott, who will also testify, said he hopes the bill makes it out of committee with the proposed changes so it can be brought to the House floor and the Senate for votes to pass it this legislative session, which ends on May 4. Wednesday’s meeting will be held via Zoom.

Written testimony will also be submitted at the hearing, including support from Raechaell Corbett of Easterseals, a certified driving instructor and a driver rehabilitation specialist, according to Sandra Busa.

Scott said House Bill 5366: An Act Concerning Revisions to the Motor Vehicle Statutes proposed changes to laws established in 1971. It is 25 pages long, but the portion Scott and the Busas are interested in is Section 7, 14-45a of the 2022 supplemental general statutes.

According to the bill, the commissioner of motor vehicles would adopt regulations on the licensing of people with health problems, with “basic standards for licensing decisions with respect to the most common and recurrent health problems, such as visual and neurological impairments.”

It would include “procedures for the referral of individual cases to the medical advisory board and specify vision standards that are necessary for a person to operate a motor vehicle safely.”

Before issuing a driver’s license to someone who has not previously been issued a license in the state of Connecticut or whose Connecticut driver’s license expired more than two years prior to the application date, the commissioner may require the person to pass a vision screening conducted by the DMV to determine if the vision standards are met, according to the bill.

Or the results of the examination, conducted by a licensed medical professional certifying the vision standards are met, could be submitted to the commissioner.

“The Commissioner of Motor Vehicles shall issue a motor vehicle operator’s license to a person who wears spectacles with bioptic lenses, provided such person otherwise meets  the vision standards specified in the regulations adopted pursuant to subsection (a) of this section and requirements for such license,” the bill says.

Though she wants her son to be able to drive, Sandra Busa said safety is her primary concern – for Max and other drivers on the road. That’s why she said she is happy to see vision testing and standards in the bill.

“I believe there should be retraining every five years,” she said. “I’m not interested in anyone being on the road who shouldn’t be there.” 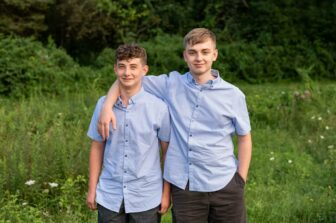 Sandra Busa said many senior citizens who have macular degeneration are still driving and wear bioptic lenses to prolong the freedom they enjoy.

“We want people to be able to keep their jobs and live where they want to live,” Busa said. “My son wants the freedom everybody else has. As an adult, I think of what it takes to get kids from point A to point B. I can’t imagine doing that taking me or my husband out of the equation – though single parents do it.”

Jim and Sandra Busa also have an older son, Ethan, 17, a Masuk senior, who already has a driver’s license. “He’s been driving a-year-and-half now and it’s just been fantastic,” Sandra said.

Sandra said she and her husband always knew it would be an issue for Max when he got older.

“His treating team is out of New York, where bioptics are allowed, and they were stunned when I told them he wasn’t eligible to get his driver’s license in Connecticut,” Sandra said. “His vision specialist said he was the perfect candidate to be able to drive.”

Sandra said the specialist is willing to supply documentation and to write a letter on her son’s behalf.

Aside from the possibility of her son being able to drive, Sandra sees other signs of hope when it comes to Stargardt’s disease.

Toyota aired a commercial during the Super Bowl, telling the inspirational story of Brian McKeever, a skier who contracted Stargardt’s disease. McKeever and his brother overcame his condition, teaming up as Paralympic skiers and winning 10 medals.

Sandra said there are now gene therapies that have reversed the disease in some patients. “I’m really hopeful that one day there will be a cure in Max’s lifetime,” she said.

For now, the focus in on the passage of House Bill 5366 so Max can drive.

“I just want that freedom most of all, just to do stuff on my own and not have my mom bring me everywhere,” Max said. “I want to live like everyone else and not be seen as someone with disabilities.”