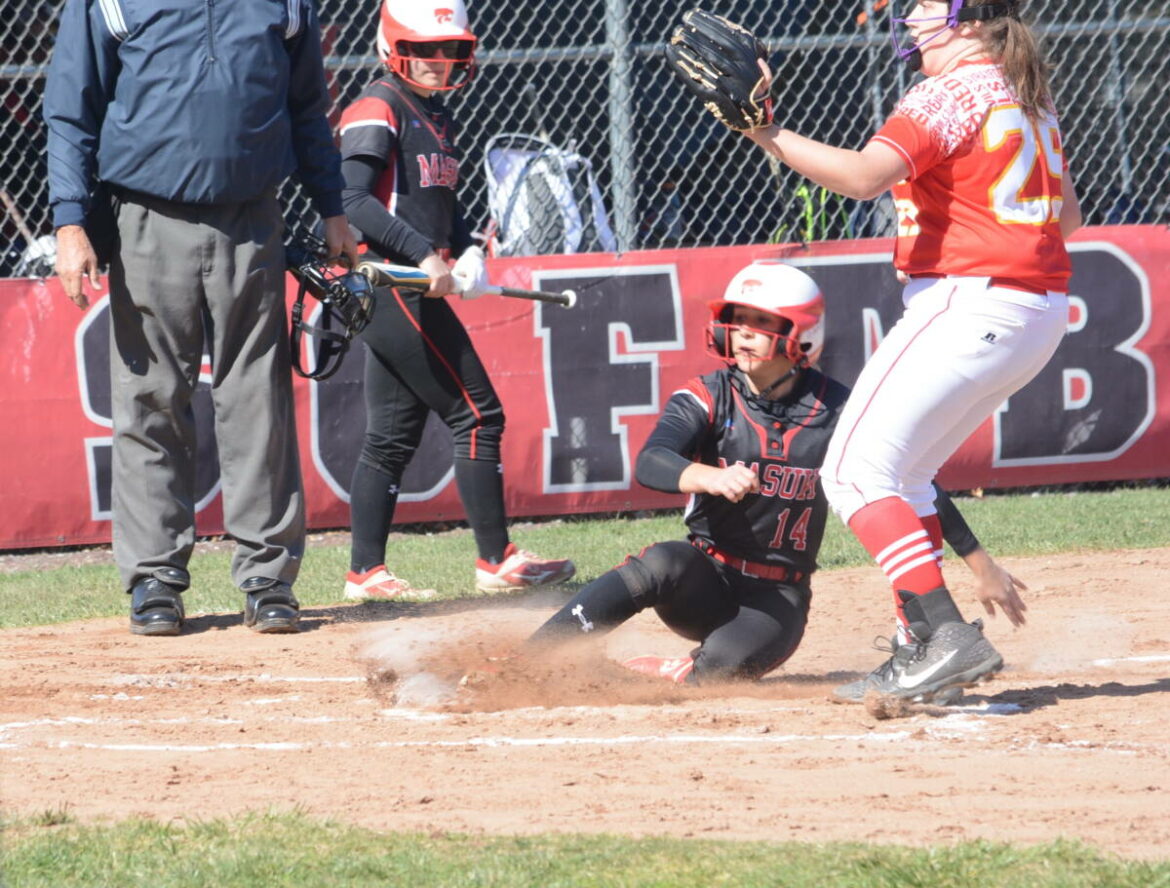 Natalie Lieto slides safely at home, while scoring a run during the Panthers' 9-0 outburst in the first inning against Stratford.

MONROE, CT — Masuk High’s softball team sandwiched a 28-1 drubbing of visiting Stratford (in a five-inning, mercy-rule blowout) with a pair of tough tests.

The Panthers passed the first one shutting out previously unbeaten non-conference foe RHAM 2-0 at home on April 19. 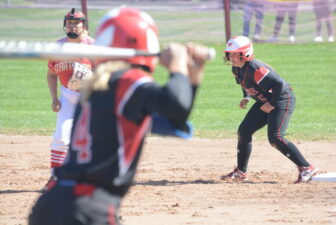 The Panthers’ Ava Moretti leads off first base as Natalie Lieto bats for Masuk.

Next in this stretch of four games in as many days is a visit to FCIAC standout St. Joseph of Trumbull, unbeaten in state play and which has lost only to a pair of squads from New Jersey. The St. Joe’s game is Thursday, April 21, at 4 p.m. Then comes a visit to South-West Conference opponent New Fairfield, Friday, April 22, at 4:15 p.m.

Against RHAM, which was 6-0 coming in, Masuk pitcher Kathryn Gallant struck out 11 and allowed just two singles. 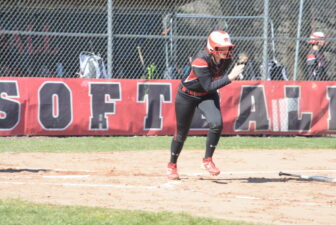 Masuk’s Kat Gallant runs to first base after making contact against Stratford.

Masuk jumped out to a 9-0 lead in the first inning against Stratford. The Panthers banged out 20 hits and capitalized on six Stratford errors.

With an opportunity for Coach Leigh Barone to use her reserves, it was a complete team effort. Bacoulis, a freshman, got the start and struck out 10 batters. She allowed just one hit a single off the bat of Shyan Rolle. Megan Wendland drove in the lone Stratford run. Masuk improved to 6-1 overall. 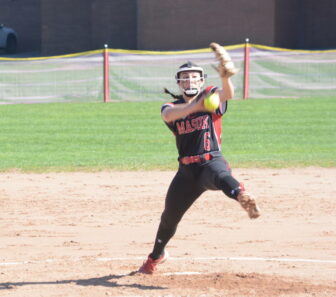 Julia Bacoulis winds up for a pitch against Stratford in Masuk’s blowout victory.

The football-like score was a nice break in the midst of a challenging stretch. Prior to the RHAM game, the Panthers had a tough one against Fitch, a 3-2 victory. Actually, thus far, the only other lopsided outcome were an 8-0 blanking of Immaculate and 19-0 win over Kolbe Cathedral. Masuk also had a 2-0 loss to Fairfield Ludlowe and 2-0 win over Fairfield Warde in battles with two strong FCIAC squads. 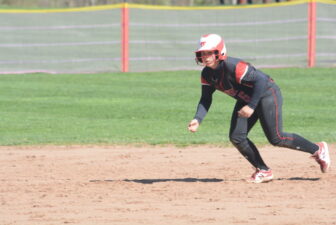 The tough matchups, including what is anticipated to be a challenging one at St. Joe’s, should help prepare Masuk for the games that matter most — in the conference and state tournaments — Barone believes.

“It’ll be good for us. We’ve got a young team,” Masuk’s coach said. “When you’re in those tournaments that’s the pitching you’re going to see.”