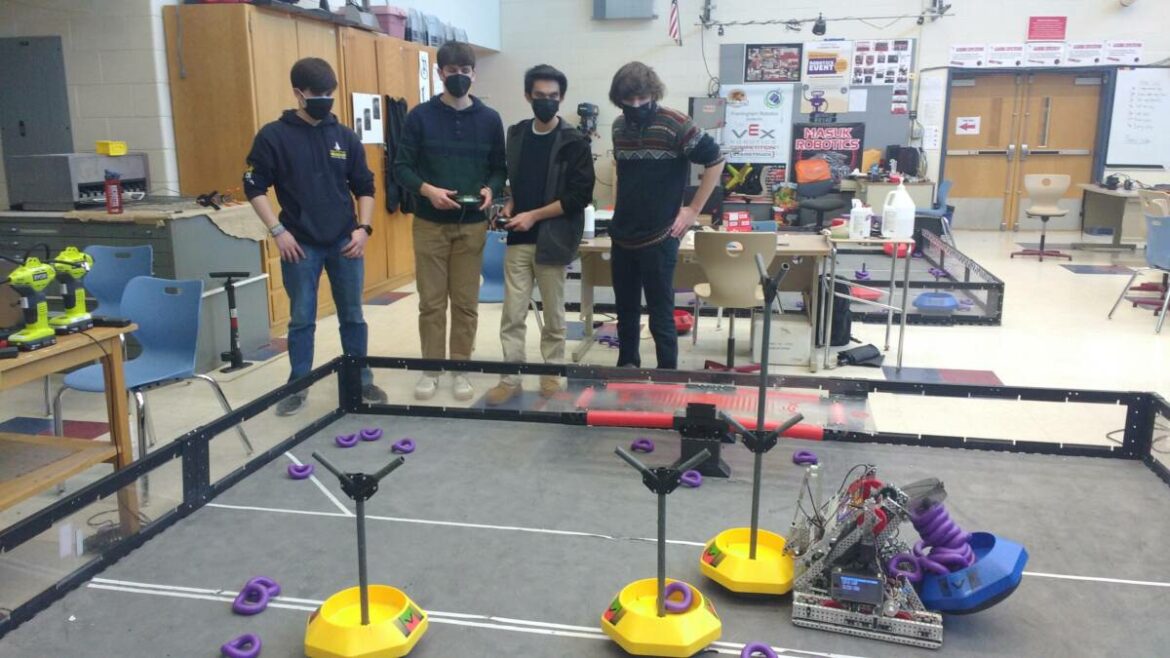 MONROE, CT — Throughout the school year the Masuk High School Robotics Team spent many hours planning, building, programming, testing, adjusting and playing with a robot. This weekend, its members are ready to put their time, skills — and possibly some luck — to the test.

The Masuk team will bring their metal compete in the 4th Annual NorCal VEX Tipping Point High School Tournament in Milpitas, Calif. Usually held at Google, due to COVID related restrictions, the competition is going to be at the India Community Center on Friday and Saturday.

Considered a signature event — among about 10 held throughout the country during the season — this tournament draws top robotics teams from around the United States and Canada. The top teams earn invitations to the VEX World Championship.

Depending on the event, robots are tasked with the challenge to stack cubes or collect items while battling with their mechanical counterparts.

In the upcoming competition, robots will compete to rack up points by collecting goals and then rings to fill the goals, balancing the goals in platforms, and then going onto the platform themselves. This is all done by remote control and via intense programming.

Teams control robots to do more than collect the rings. There is also a hockey- or football-like element with physical battles during play.

“There are situations you can disable your opponent in what is called game play,” according to William McDonough, a technology education teacher and head coach of Masuk’s robotics team.

This might include pinning another robot or unintentionally flipping an opposing bot. If a robot is stronger than another that is attempting to take a point-gaining piece away that robot might end up using its force against itself and tip, for example.

This is Masuk’s second signature event of the year, having competed at an event at Worcester Polytechnic Institute already. The Masuk students take pride in the strength, durability and speed of their robot.

The team’s robot, affectionately known as Dennis, named after a former club member, is 17 pounds of aluminum framing cut to size, wheels, motors, screws, pistons and a few other pieces.

Dennis can move about 20 inches per second. Although more points can be earned by collecting rings from up high during a competition, the Masuk team decided the ability to allow a robot to reach high makes it slower and less stable. They put the time and energy into making it faster and more efficient at collecting rings at ground level.

As sophomores, the Masuk team won the Night at the Museum signature event at the Smithsonian National Air and Space Museum.

Each of these four Masuk seniors is looking forward to applying their education from this program in college. Moreno, Rentz and Gallant will all study engineering and Cusa will study computer science.

They have been involved with Monroe’s program, which includes middle school teams, for about seven years. Monroe has 23 teams, 12 at the high school and 11 at the middle school level, and 140 members. The program has been around for about a decade and a half.

Masuk’s team has already had its share of success, earning two Southern New England championships and wins at a variety of significant tourneys. The Masuk team has won five of six area competitions, placing second once, during this school year. The group is ranked 12th in the world.

Success is had through the high level of skill of the robot which comes via the students. Algorithms are used to make the robot do what they want. Dennis can not only collect items at rapid speed but has ability to clutch onto those goals and not let go.

“They need to have two drivers because it’s so complex that one person can’t press all of the buttons,” said McDonough, who sometimes serves as referee at competitions and will do so at this weekend’s tourney.

These big tourneys consist of a series of brief competitions to set rankings and narrow the field to compete for the championship. The beginning of competitions is crucial for success.

“The first 15 seconds is a non-driver time your team must program the robot to score as many points to gain an advantage. If done correctly when the driver time starts you are in control of the match and can force the other teams to play your game play,” McDonough said.

Contacts around the world

As programmer, Cusa uses 3,000 to 4,000 lines of code to make the robot work properly. McDonough considers Cusa the best programmer in New England, if not the United States. The level of complexity Cusa brings to the team’s robot makes it function at a high level.

“His ability to code has taken them to another level because it takes a lot of pressure off them when they compete,” McDonough said.

Cusa said he has collaborated with a student from Taiwan on advanced programming aspects.

“This is a world-wide thing. They’re making contacts with people from around the world, trading ideas, sharing research and growing from these contacts,” McDonough said.

For his scouting duties, Gallant has three primary roles. He watches other team’s matches to develop strategy of how to beat opponents and finds their strengths and weaknesses and any patterns teams show. He also develops relationships with teams to share their information which helps each team improve. Scouting enables a participant to sell their team to other teams as an alliance partner. A partner must know all the strengths and weakness of robots to be able to show that they are compatible partner.

McDonough said the students put in about 40 hours a week outside of school researching and doing work to make their robot the best it can be.

McDonough, Monroe’s Teacher of the Year, fundraises for the club and has raised more than $40,000 to cover expenses. The students appreciate his devotion and note that he provides the resources, time, and guidance to get the most of out them. Masuk’s Robotics team members said this opportunity has been life-changing and they are determined to make the most of it.

The end result could be a chance to compete for a national title.

“Our program challenges our members to do a lot more than just building robots,” McDonough said. “We work hard to help them find their passion and their path.”