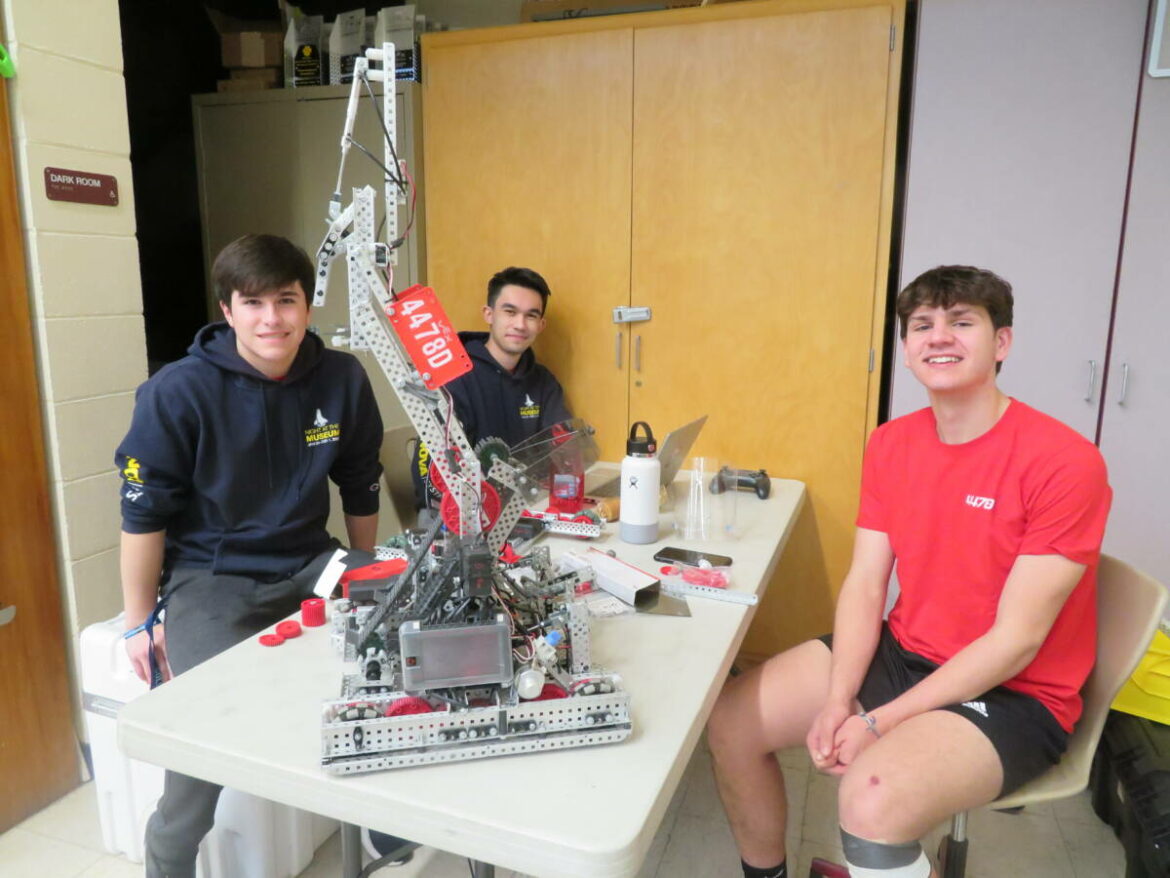 MONROE, CT — When the VEX Robotics World Championship comes to Dallas, Texas, in May, 600 teams from the U.S. and over 20 countries will compete. Among them will be five Masuk High School teams and one from Jockey Hollow Middle School.

Masuk’s teams account for 20 percent of the 25 spots for teams from high schools in Southern New England, which includes Connecticut, Massachusetts and Rhode Island — and the Jockey Hollow team is one of only seven from the region.

“My D Team is probably the best team I ever had,” said William McDonough, a technology education teacher and head coach of Masuk’s robotics teams.

The D Team is ranked among the Top 20 in the world. In the Southern New England Championship, held from March 7-9 with 80 teams from Connecticut, Massachusetts and Rhode Island, they went 10-0, chose Masuk’s E-Team as their partner for the tournament and won the championship together. 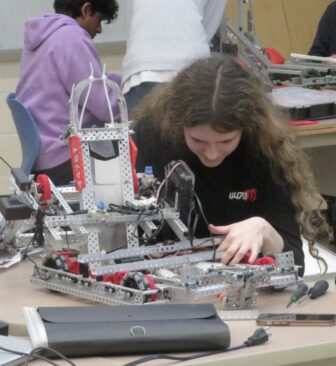 Team D also finished first in the skills competition and won The Amaze Award for best offensive robot, because their robot, Dennis, scored the most points in the competition.

McDonough said Masuk and Jockey Hollow’s program has 24 teams with close to 160 students, who practice four days a week during the season.

“We have the largest robotics program on the East Coast,” he said.

When the VEX Robotics World Championship is held at the Kay Bailey Hutchinson Convention Center from May 3-12, Masuk will bring roughly 40 qualifying students and another 20 students, so they can learn what it takes to reach that level, McDonough said. 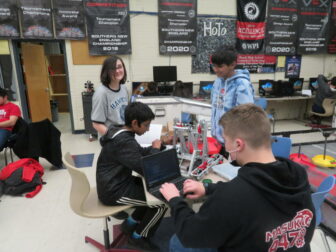 Rowley, whose family moved to Monroe from England during the pandemic, said she and her sister Keira, 12, joined robotics to make friends. “I love robots,” Rowley said. “I always thought they were cool.”

The four boys on the team have been in the robotics program for three years. Menezes said they’ve known each other from school, but this is the first year they are on the same team together.

“We became better friends through robotics,” he said. 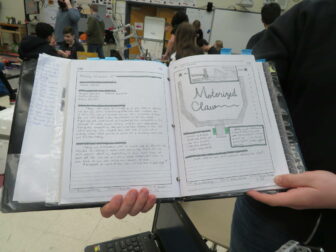 The Corona VEXines take careful notes with drawings, while planning designs for their robots.

“Both of my parents work in software and I like building things,” Sharma said of the reason he joined robotics. “Every aspect of robotics is something different with something new to learn.”

Sharma said coding is a part of it. He also opened a pad his team made showing extensive notes and drawings of robots.

Heffelfinger’s mother is a nurse at St. Vincent’s Medical Center.

“I saw a machine called the da Vinci Surgical System and that sparked my interest in robotics,” he said, “because it’s extremely accurate and minimizes mistakes. And I wanted to learn how to code, because that is something I enjoy.”

Of joining robotics, Heffelfinger said, “I think it was a good decision. I made a lot of friends along the way.” 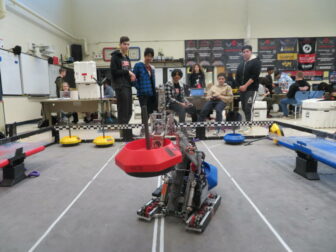 Across the hall, Team E prepared for an interview. Members include Lucas Cartagena, John Iacono, brothers Arvin and Ashwin Sarma, Matthew Mea and Liam Kelly. All are sophomores with the exception of Iacono who is a freshman.

This is the first year of robotics for Cartagena and Iacono.

“Building robots and seeing how they work in different tasks interested me — and the programming,” said Cartagena.

Iacono’s first exposure to robotics was in the seventh and eighth grade when robot building was taught in tech ed. “I got a little more into it,” he said.

Arvin said he has loved participating in robotics since the seventh grade. “I joined because I liked computer programming,” he said, “and once I joined, I learned how to build.”

Mea said he was interested in robotics since the third grade, but his school in the Queens, N.Y., did not have a robotics program. He moved to Monroe when he was a sixth-grader and learned about the program as a seventh grader at Jockey Hollow.

“I really enjoyed it,” Mea said. “It’s better than I thought it would be. It’s fun being part of a team and building something you can be proud of.”

“I’ve always had a love of programming and saw robotics as a way to widen my horizons,” said Ashwin. “You can learn about programs that work for self-driving cars in robotics.”

The teammates are excited about winning the Southern New England Championship and moving on to the World Championship.

“I didn’t expect to get this far,” Mea added. 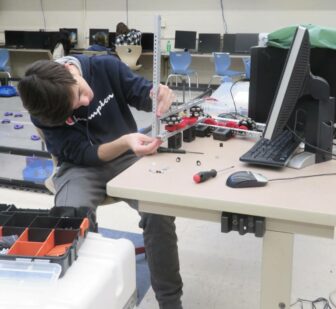 One of the things that impresses McDonough most about Team D is how its members are always striving to help everyone around them improve, from Monroe’s younger teams to other robotics teams in Connecticut.

“When they move on, they want to see continued success for Masuk Robotics,” McDonough said.

Ethan Rentz said helping the younger teams is important to he and his teammates. All four members serve on the Leadership Council, which works to pass down knowledge of robotics to Masuk and Jockey Hollow students.

Jake Moreno has been in robotics since the sixth grade. Ethan Rentz joined in the seventh grade, Will Gallant in eighth grade, and Aidan Cusa as a Masuk freshman.

Moreno was on the Senior X Team his freshman year. But the four friends teamed up their sophomore year and have been competing together ever since.

Their skills complement each other. Moreno is a co-builder, Rentz is a co-builder/driver, Gallant a secondary builder/scout and Cusa is the programmer and driver.

Moreno said it is sad that the World Championship will be the last time they compete together, though it will also be exciting because it is the first year people know who they are.

“We gained a reputation as one of the best teams in the country and the world,” he said.

“This robot is our best shot to do well in the Worlds because it’s based on the collective years of our knowledge,” Cusa said.

Member of Team D have fond memories of joining robotics.

“I was a clueless sixth-grader, not knowing what I wanted to do,” Moreno said. “I found my passion for engineering and it helps you build leadership skills.”

Rentz was going to play soccer before his mother encouraged him to join robotics, which has become a constant in his life.

“It seemed like a great opportunity,” he said, adding he has since made friendships with people who share his passion for robotics.

The four friends gave high praise to McDonough for his leadership in the robotics program.

“I can’t give Mr. McDonough enough credit. You get what you put into it,” Rentz said.

“He’s just been here guiding us,” Moreno said. “When he sees us straying off the path, he puts us right back on it.”

Cusa said, “he just touches a lot of people and helps them find their passion.”