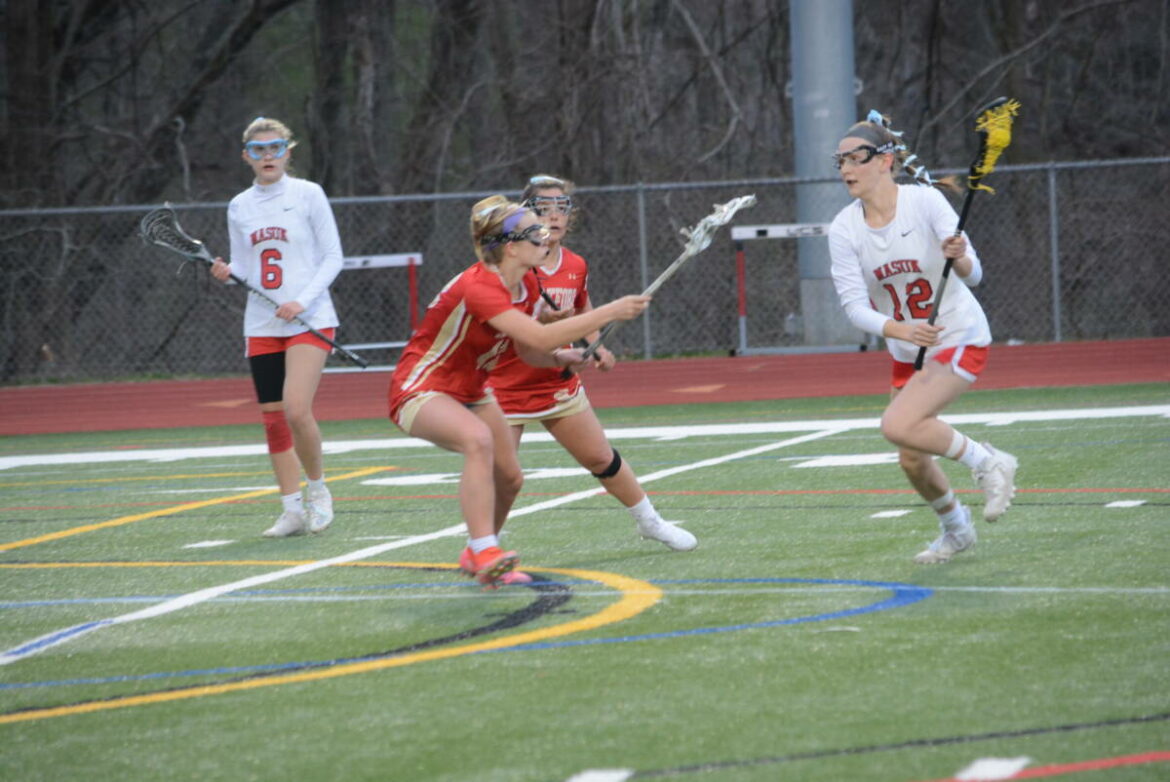 Juliana Pagano, right, moves the ball for Masuk in a home game against Stratford-Bunnell on April 27. The Panthers' girls lacrosse team 15-2.

MONROE, CT — Not only has Masuk High’s girls lacrosse team won six games in a row, and not only have the Panthers scored in double figures in each of the last five, but they have also won by double digits in all of them as well.

The Panthers got their winning streak started with a fairly lopsided triumph over visiting Joel Barlow on April 18. Then came a 20-8 victory at Immaculate on April 23 and an 18-7 victory at Fairfield Warde two days later.

The Panthers cruised to a 15-2 triumph over visiting Stratford-Bunnell on April 27. Amelia Logan had four goals, and Jess Minch and Juliana Pagano each hit the back of the net three times. 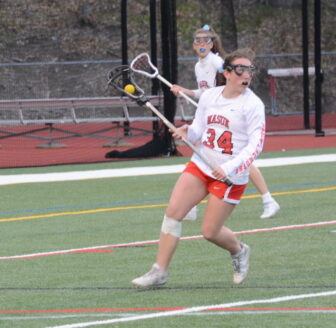 Cecilia MacIntyre moves for the ball for Masuk as teammate Lilly Cameron looks on.

It was 2-0 Masuk just past the mid-point of the first half against Stratford-Bunnell when the Panthers began piling up the goals en route to an 8-1 halftime advantage. Once it was 4-0, the visitors looked to stop the momentum but Logan scored moments after a Stratford-Bunnell timeout to make it 5-0 with 9:58 to go in the half.

Sam Henry got control off the ensuing draw, which led to Cecilia MacIntyre scoring on a free position shot about a half-minute later. Pagano scored to make it 7-0 and, following a Panther stop on defense, Logan converted in transition just over a minute later, making it 8-0 with 3:29 left in the half.

Masuk’s defense held Stratford-Bunnell off the scoreboard until 2:25 to go before the break. Sam Sullivan scored for Masuk when she converted a free position chance just 2:35 out of the halftime break and the Panthers picked up where they left off in the opening half.

The Panthers continued their success even with multiple starters being out.

“The scoring efforts for the team has been shared in many games, but Junior Amelia Logan has had to step into our go to attack position on offense in the absence of senior captain Mary Henry,” Masuk Coach Rob Troesser said.

“Captains Juliana Pagano and Lauren Henry have anchored the team on the defensive end, with Pagano extending her presence on the draw and in the offensive zone as well,” Troesser added.

Masuk went on the road and beat Notre Dame-Fairfield 17-7 on April 28, then went to New Milford and defeated the Green Wave 18-1 on April 30.

It would appear Masuk is in good position to keep their double-digit scoring ways going as the next game is a rematch with New Milford, this time at home. The Panthers host the Green Wave Tuesday, May 3, at 7 p.m. It is Monroe Lacrosse Youth Night, and the up and coming players in town will be recognized at the contest.