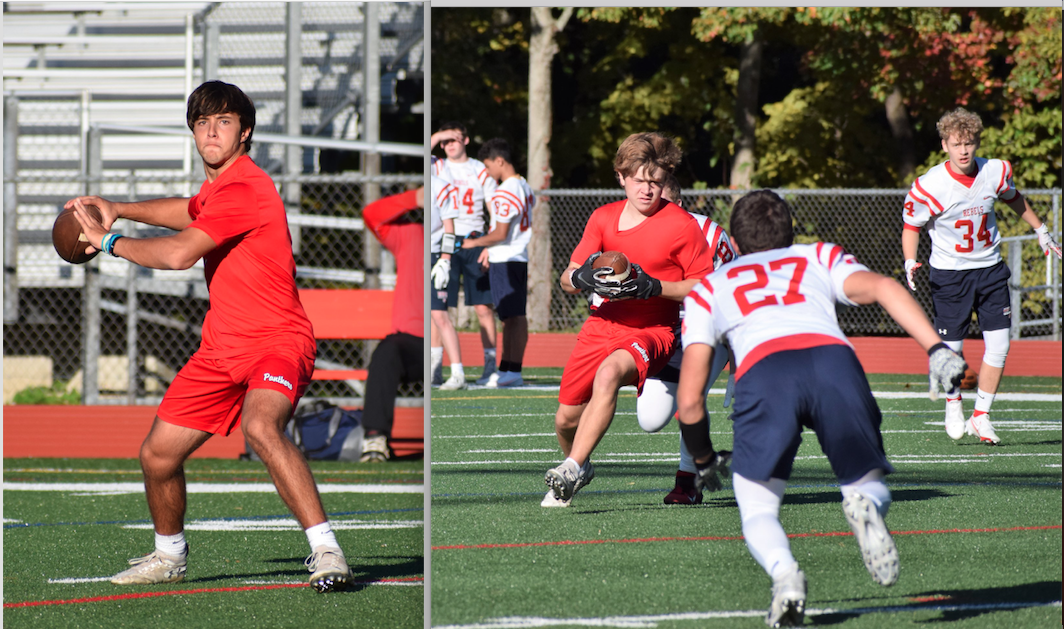 MONROE, CT — Although it isn’t standard 11 on 11 tackle football, Masuk High School’s athletes are happy to have an opportunity to play the 7 on 7, one-hand touch game allowed by the Connecticut Interscholastic Athletic Conference (CIAC) per recommendations from the Department of Public Health (DPH) in light of concerns surrounding the coronavirus.

“It’s tough. I give my kids credit,” said Masuk Coach Joe Lato, noting that the players have been through quite a fall full of unknowns and changes in plans.

After going hard in preseason practice throughout the summer in hopes of playing football this fall, the CIAC initially said football would be played beginning in early October with a shortened season despite DPH concerns and recommendations that teams not play due to the high risk classification of the sport.

Then the season got canceled by the CIAC in early September. Players throughout the state protested and CIAC and DPH officials met with state politicians to discuss the potential for a season being reinstated. But the DPH held its stance and suggested teams not play. There were considerations for club teams, but that fell through. 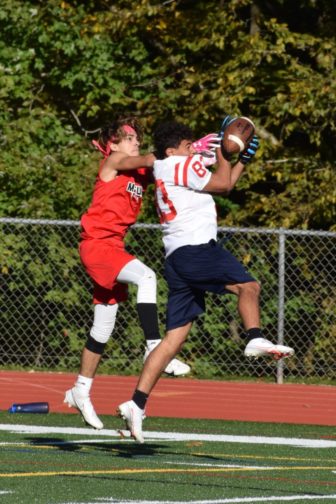 A Masuk Panther and a New Fairfield player battle for the ball in a scrimmage at Masuk Thursday.

In the end, the CIAC allowed 7 on 7 football which features no running plays and one-hand touch instead of tackling, with the CIAC announcing plans for a possible additional late-winter, early-spring season to allow for traditional football to be played, if all goes well with coronavirus numbers and school remaining in session.

“It’s been the longest offseason in the history of offseasons, and are we going to be playing in the spring? Who knows,” Lato noted.

Lato is impressed with the commitment of his players throughout the preseason and the dedication of the many who have taken advantage of this opportunity to play a variation of the game they love.

“With everything going on, I was just happy to get something. I was so stoked for 7 on 7,” said freshman Tristan Smith, a wide receiver/ defensive end who is playing defensive back in the 7 on 7 format.

A scrimmage with New Fairfield 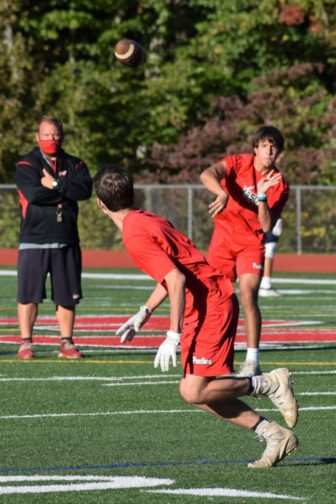 The Panthers aerial attack is on full display in a home scrimmage against New Fairfield Thursday.

Lato said more and more players are coming out for practices as the fall unfolds. The team had its first 7 on 7 experience when Masuk hosted New Fairfield players in an informal scrimmage-like contest. The score was not kept, and teams switched on and off, each taking turns for a series on offense and defense.

“We just designed it in a way that everybody’s playing,” said Lato, adding that some teams have more players and, if matched up with schools in similar situations, can have more of a game-like experience — albeit with significant modifications to the rules.

“It feels more like practice,” Lato said of this competition opportunity.

“It’s a lot different, but with some similarities,” Noah Wasilewski, a freshman wide receiver and safety said of the 7 on 7 game compared to 11 on 11 tackle. “I’m just happy to be out there playing. It’s better than having no season at all.”

“We had an opportunity to get some work in and show what we’re made of,” said freshman Edward Medaris, a receiver and running back, who usually is a lineman, but can’t play that position due to the modified rules this fall.

The fall can serve as preparation for spring if there ends up being a later season.

“Any rep you get is a good rep. Any opportunity you get to get better, it’s going to help,” Lato acknowledged.

The Masuk players were set for a 7 on 7 scrimmage with Notre Dame-Fairfield only two days after scrimmaging with New Fairfield.

A.J. Mennona, a long snapper and left guard, said: “I’m pretty thrilled we get to play. I’m still hopeful for a spring season.”

“I can’t speak enough about the great kids I coach,” Lato said.