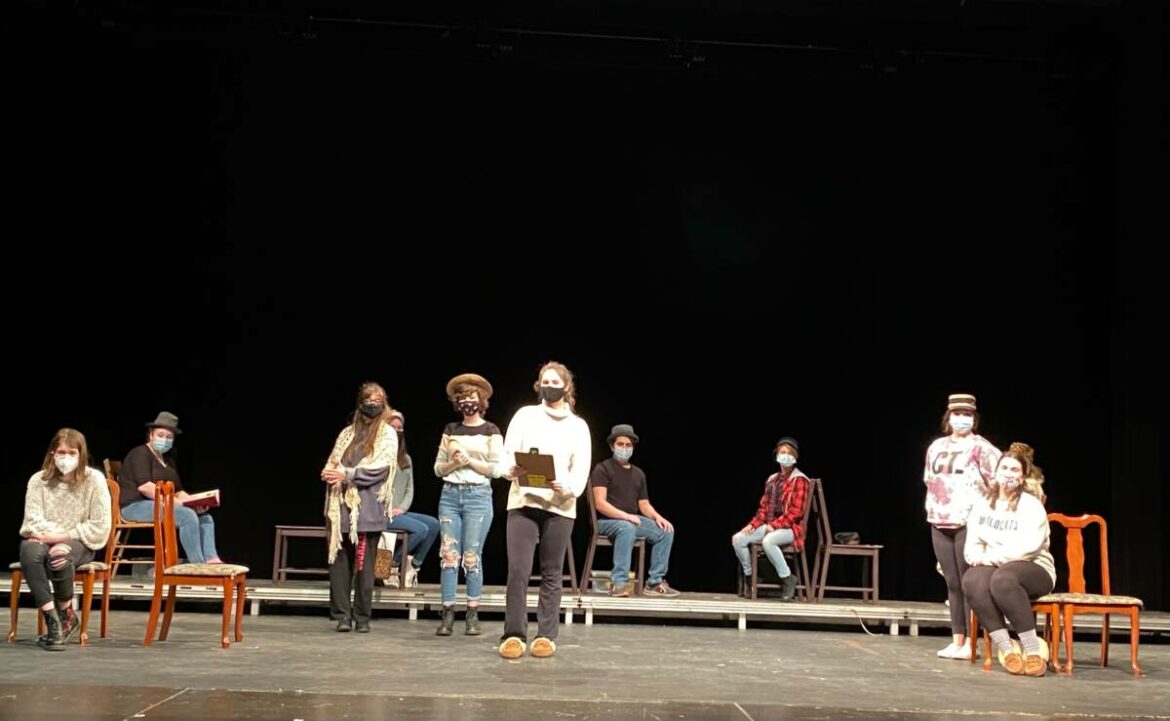 Masuk Drama students perform in rehearsals for the production of "A Wilder Evening," which will be streamed live from the theater on March 9 and 10 at 7 p.m.

MONROE, CT — The phrase “Life is like a train” is on tap for Masuk Drama as they present free performances of two Thornton Wilder one-acts in A Wilder Evening on Tuesday, March 9, and Wednesday, March 10, streaming online at 7 p.m.

The first act, “The Long Christmas Dinner,” follows the Bayard family through 40 different Christmas dinners in the span of 35 minutes.

The second act, “Pullman Car Hiawatha,” became the basis for Thornton Wilder’s Pulitzer Prize-winning “Our Town.” A stage manager welcomes the audience to the theater and announces where the train is coming from and going to.

Along the journey, the many different passengers are introduced, death happens and mortality is questioned — all while traveling the American countryside.

Rehearsals have been held since November, both online and in-person.

The performance was originally scheduled for a January run, but was pushed back due to a last-minute shutdown in December.  Students have diligently continued their rehearsals online, while waiting for the district to open back up.

In describing the rehearsal process, cast member Jonathon Fontana said the schedule has been “chaotic with the changes between online and in-person, plus snow days and COVID related issues.”

Despite this, rehearsals have been going smoothly.

“It has  been good,” said cast member Jackie Cohen. “The acting games we play, the rehearsal process and the team bonding as an ensemble.”

Fellow cast member Erin Daly added, “the rehearsal process has been professional, getting a lot out of it for people who want to continue beyond high school. We used a lot of theater history, learning of other past shows and people and their performances.”

“It is important that students look at history when preparing for these pieces, especially what was going on in the world when these pieces were written, and the writer’s own life,” Simonetti said. “It is there that we find clues to why these plays were written and how to make them relevant to today’s audiences.”

“Students also had a lot of time to reflect on their own family traditions during holidays, as both plays happen around the Christmas/ Hanukkah season,” Simonetti added.

All of the actors take a role in both plays.

Jonathan Fontana, who plays five different characters throughout the evening, said, “it is fun to perform in them — ‘The Long Christmas Dinner,’ is better to watch, but ‘Pullman Car,’ because I play more characters, is my favorite and feels like it has more movement in it.”

“A Wilder Evening” will be streamed live from the theater on March 9 and 10 at 7 p.m. Though it is free, a $10 donation to support the drama program is suggested.

One thought on “Masuk Drama promises ‘A Wilder Evening’ for viewers”