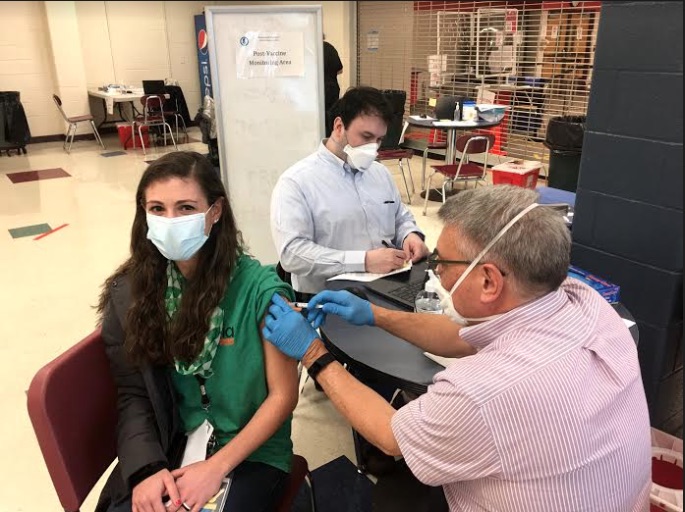 Sarah Pulliam receives her first dose of the COVID-19 vaccine at a clinic a Masuk High School Wednesday. Contributed

MONROE, CT — After a year of quarantining, distance and hybrid learning, teachers, bus drivers, para educators and others who do work for Monroe public schools, rolled up their sleeves for their first dose of the COVID-19 vaccine.

Monroe’s Emergency Management and Health departments inoculated about 450 people who signed up for a clinic at Masuk High School Wednesday.

Early in the afternoon, Solek was greeted by a Monroe Community Emergency Response Team (CERT) volunteer outside the school entrance. Using a clipboard, he checked his sheet to make sure Solek had an appointment.

Police Capt. Keith White said the town had been holding clinics twice a week, mostly at the Monroe Senior Center, when eligibility was based solely on age.

This month, Gov. Ned Lamont allowed vaccinations for educators from pre-k through grade 12, support staff and licensed childcare professionals living or working in the state.

Now with the increase in volume, White said a larger facility was needed, so this clinic was held in the Masuk cafeteria.

He said the town is trying to schedule a clinic for early childcare professionals next week. 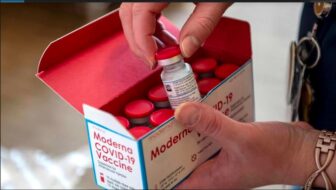 The Moderna Covid-19 vaccine was used at the clinic at Masuk High School Wednesday.

Vaccinations were given at Masuk from 9 a.m. until 3 p.m., though White said the volunteers would not leave until around 4 p.m.

After employees were checked in, they entered the school cafeteria, where they were assigned a vaccination station.

The shots were given by Monroe Health Department personnel and Medical Reserve Corps volunteers authorized to administer vaccinations.

A divider split the cafeteria. Those who received their shots sat at desks in a monitoring area on the other side of the room for 15 minutes to a half-an-hour, in case anyone had an allergic reaction.

White said people were also seated six feet apart in the observation area. “Two people had needle panic, but there were no allergic reactions,” he said.

White said a second dose will be scheduled for early April.

‘This is a godsend’

Christine Bennett, a para educator for Monroe Elementary School, was among those seated in the observation area.

“I feel this is a godsend,” she said. “It’s a lifeline because all the teachers in my building, the majority, have been waiting for this. They’re always saying how we need to get these schools open full time. Of course, I’ll still wear a mask.”

Bennett said she is happy the governor opened vaccinations up to more people. “I like the way he’s handling this,” she said. “Lamont has been very good.”

Cole said his mother, who lives in Georgia, had both doses of the vaccine.

“They were kind of my guinea pigs,” Cole said of his parents, adding of his mother, “odds are I will react the way she did.”

Cole said his mother was physically ill a day after her second dose, then had a little stomach illness the following day, before feeling better.

“She said she would do it again, even knowing what she went through,” Cole said.

“It’s a relief,” Sikorski said of receiving her first shot. “It’s nice they have a place for everyone to come in.”

Both Sikorski and Cole said the town had a streamlined scheduling process that was easy to follow, compared to the online process the state of Connecticut uses. 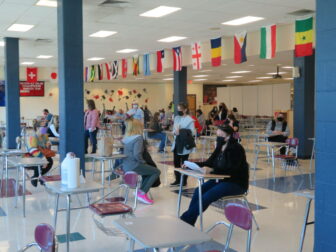 Educators wait in an observation area in the Masuk cafeteria after receiving their first dose of the COVID-19 vaccine Wednesday.

Cole said he has older relatives who spent about 45 minutes trying to figure out the state system. Then there was the challenge of finding a clinic close to home, he added.

On Wednesday, Sikorski said she was able to get her shot fairly quickly and Cole compared it to getting a flu shot.

“It’s just a relief. After being exposed at work all the time, I feel it is such a big relief,” Sikorski said of the piece of mind from receiving her first dose.

Cole said making sure young children keep their masks on can be a challenge, adding some have masks that don’t fit their face and fall off.

It is also hard to socially distance at times, especially when a child tries to give a teacher a hug. “If they want to hug you, they’re gonna hug you,” Cole said.