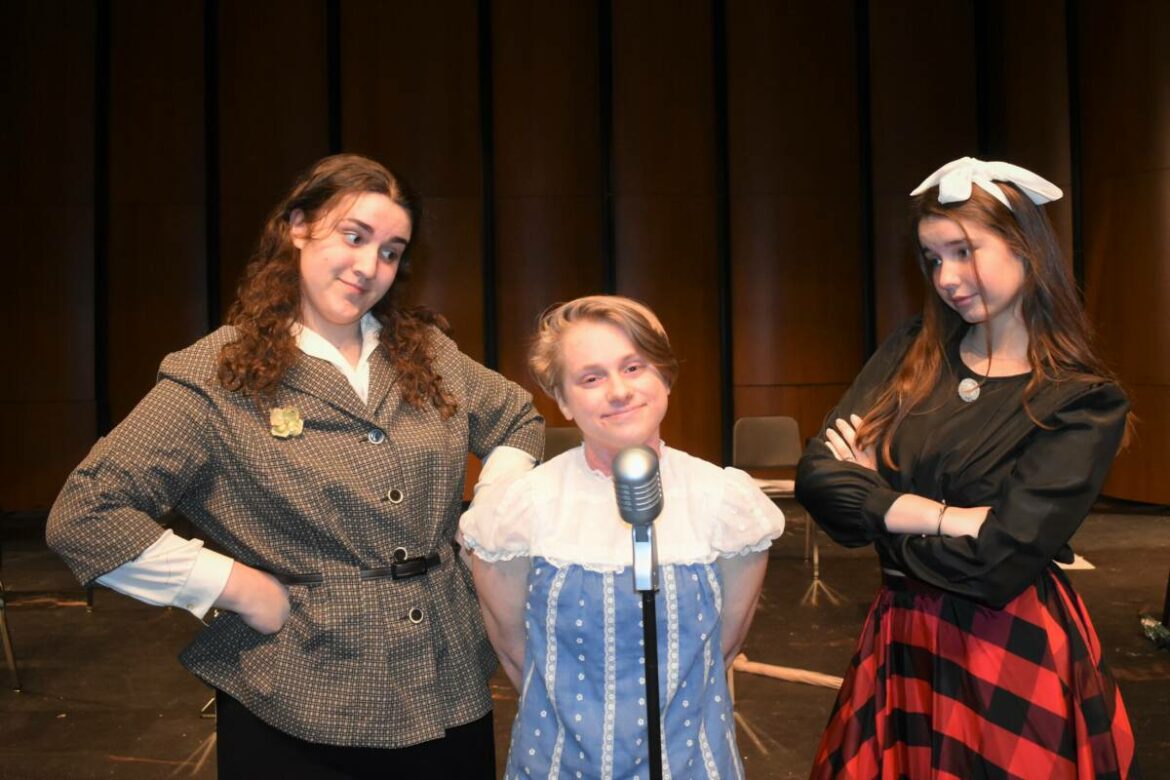 Lauren Davis, as Rose Smith, far left, performs in Masuk's production of the classic M-G-M movie musical "Meet Me in St. Louis" with, from left, Grey Simons, as the mischievous Tootie Smith, and Elizabeth LaRosa, as Esther Smith. Photo by Karen Coffey

MONROE, CT — Make tracks to the Masuk Performing Arts Center for the high school’s production of the classic MGM movie musical, “Meet Me in St. Louis,” presented as a live radio play.

The Performing Arts Center will be transformed to a 1940s radio studio as the Masuk students present the heartwarming story of the Smith family grappling with life changes and new love in bustling St. Louis on the brink of the 1904 World’s Fair.

There will be no in person sales. The show runs approximately one hour and 20 minutes. Mask wearing and social distancing will be observed. 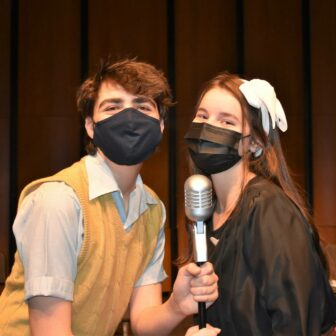 Michael Cavone, left, is featured as the “boy-next-door” John Truitt in Meet Me In St. Louis: A Live Radio Play by Joe Landry. Here he is performing with Elizabeth LaRosa, who plays the role of Esther Smith. Photo by Karen Coffey

Based on the hit 1944 MGM movie musical starring Judy Garland, playwright Joe Landry has adapted the Hugh Wheeler book into the 1940s Live Radio Play format, and features songs from the movie by Hugh Martin and Ralph Blaine, including classics such as “The Boy Next Door,” “Skip To My Lou,” “The Trolley Song,” “Have Yourself A Merry Little Christmas” and “Meet Me in St. Louis.”

The show will be directed, designed and choreographed by Tom Simonetti, of Valley Shakespeare Festival, with musical direction by Keri Salustri. The production also features costumes by Anna Cretella, lighting by Robert Primorac and sound design by Bob Bachman — and it will be stage managed by Christopher Tierney.

“This is such a heartwarming story, with a tuneful score, and definitely needed after the year we have had,” Simonetti said. “I am very excited to work with my friend, playwright Joe Landry, who adapted the musical into the live radio play format.”

“The piece has been performed sporadically in the professional regional theater, but had to be reenvisioned and expanded for a larger cast,” he continued. “Students have been getting script and music changes throughout the rehearsal process and have had a chance to talk and work with Mr. Landry. Our rehearsals have had the feel of what developing a Broadway show would look like.”

“The student actors have had to do a lot of work playing characters from the film, as well as 1940s radio actors telling the story,” Simonetti said. “Both my dramaturg, Jamie Grosso, and assistant director, Maggie McShane, have been very helpful. They have really risen to all challenges, which is a testament to the theater program here at Masuk.” 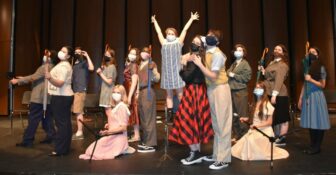 The cast of Masuk High School’s production of “Meet Me In St. Louis: A Live Radio Play” will take the stage June 4 and 5. Photo by Karen Coffey

Maile Booth plays Grandfather Smith and Erin Daly plays the fun-loving Irish maid, Katie. Playing a variety of roles is Sana Sarr, who has to switch from the son, Lon Smith to Rose’s beau, Warren Sheffield in a matter of a hat change! Audrey Lesko plays Lon’s love interest, Lucille Ballard. And Michael Cavone is featured as the “boy-next-door” John Truitt.

Rounding out the cast includes an ensemble who plays several different roles: Jaqueline Cohen, Samantha Cornut and Vibhuti Jani. Nicholas Hancox will provide more instrumentation and live sound effects to round out the evening.