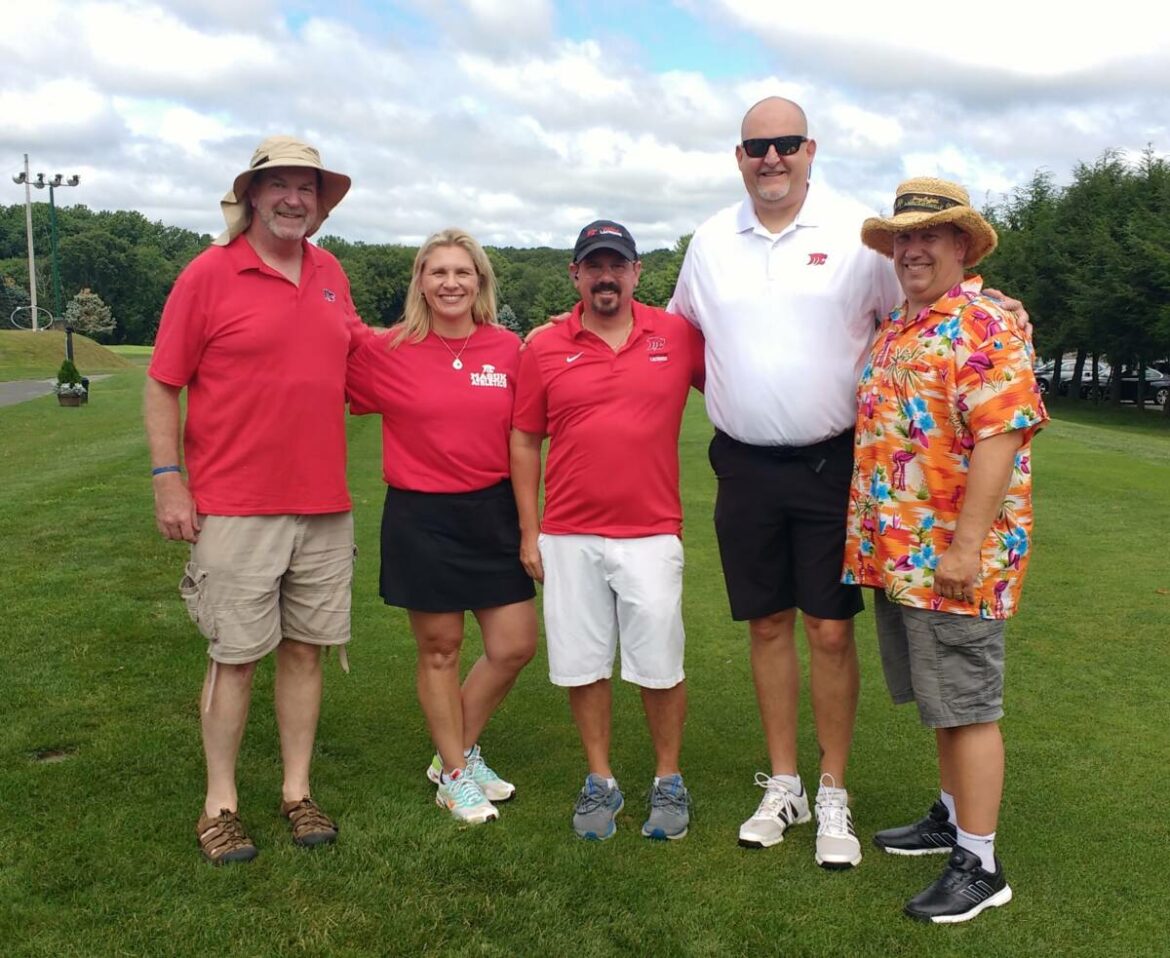 From raffle prizes, sponsorships and donations to the play on the course, the day came together as a hole in one of sorts for Masuk’s athletic programs. This year’s fundraising will be tallied in the weeks to come, though last year’s event brought in about $30,000, organizers said.

There were 139 golfers and about two dozen volunteer parents and athletes on hand to ensure things sailed along like a well-struck tee shot. 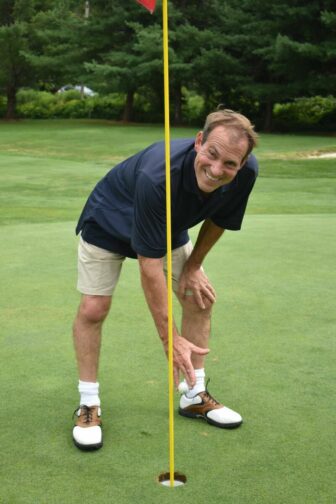 Matt Offredi won a $10,000 prize for making a hole in one. Photo by Karen Coffey

The boosters fund varsity letters and awards for athletes, as well as $500 scholarships each to a male and female every school year. The boosters pull in money through concession sales at games but were not able to do that due to coronavirus restrictions last year.

“Hopefully this fall we can have fans at the games and sell concessions,” said Kris Yeager, president of the booster club, and a three-year booster. “If not, we’ll look at other, creative ways to find some revenue.”

Peter Szklarz, coach of the Masuk boys’ basketball team, is grateful for the efforts of the boosters and plays in the tourney every year.

“They’re essential. Anytime we need anything they’re there to help us, providing equipment or money,” Szklarz said.

Among the recent big ticket items the boosters have provided for the athletics program are the softball field scoreboard and an ice machine for use by the athletic trainer.

Yeager’s daughter, Grace, is a volleyball and basketball player who is injured. Despite the fact Yeager will not get to cheer on his daughter from the sidelines this school year, he is enthusiastic about the season ahead.

“I love going to the events and just watching,” said Yeager, adding his friends have children on the Masuk High teams. “Kids’ sports is something I really enjoy being a part of.”

Joe Velky and Jason Henry are co-chairs of the golf outing. Velky has a daughter, Meghan, who plays ice hockey and tennis at Masuk, and a younger daughter, Jennifer, a seventh-grader who plans to play sports at Masuk in a couple of years.

“It’s a great event, great people — lots of fun,” Velky said of the golf tourney. “It’s a fun way to (raise money). It gets everybody involved.”

Velky credited Whitney Farms for helping ensure last year’s tourney fundraiser took place despite all of the restrictions in place.

“This is the event for the booster club. It is the most important event. It raises most of the money for the programs,” Henry said.

Henry said he thanks everybody for coming out to support the sports teams, and is hoping more parents get involved with the boosters.

“I would love to see people join the booster club as members,” said Henry, adding it costs $25 to join and boosters help bring in money to offset expenses not covered in the athletics department budget.

Henry’s daughter, Juliana, graduated from Masuk a couple of years ago and is now playing lacrosse at Sacred Heart University. Juliana was on hand to help out at the golf event.

“It’s really important. Without the boosters we would have to raise the money ourselves, as individual teams,” she said, adding having a booster club to represent all sports helps allocate money between different sports.

Julie McHugh, secretary of the boosters, has a son, Sam, who competes on the swim and dive team, and a daughter, Libby, who plays field hockey and golf.

“It’s a nice opportunity for the community to come together and do something nice for the kids and raise some money for them,” McHugh said.

Among the tourney participants was Masuk Athletic Director John DeGennaro, who appreciates all the boosters do.

“The booster club is an essential player in the success of the student athletes and it’s all about the kids for them,” DeGennaro said.

For information about the Masuk All Sports Booster Club, or to make a donation, click here.