A graveling operation left a massive hole on industrial property on Cambridge and Independence drives.

MONROE, CT — Inland Wetlands Commissioners hired Russell Dirienzo to serve as its consultant to help them understand the environmental data and sampling for a massive wetlands restoration project in the Pepper Street Business Park.

Dirienzo, a licensed environmental professional, is principal geologist and associate vice president of Arcadis, a Sandy Hook firm. He will be paid a lump sum of $9,500 for his work, which must be delivered to Monroe’s land use department by Nov. 12.

Arnold Karp, the owner of the property at 64 Cambridge Drive and 4 Independence Drive, is proposing an ambitious plan to restore the site and prepare it for development. An estimated 75,575 truck loads of material will be needed to fill a massive hole left by the previous owner, a process that could take up to 10 years.

During the commission’s meeting Wednesday, Vice Chairwoman Lois Spence said Arcadis and a representative of another firm that expressed interest, Weston & Sampson, are both qualified, but she was impressed with Dirienzo’s familiarity with Monroe.

The decision was close, with Chairman Keith Romano and commissioner, B.J. Hall, leaning toward Weston & Sampson. But the majority of the commission, 4 to 2, wanted to go with Arcadis.

The Inland Wetlands Commission’s next meeting is Nov. 18, when an intervenor on the application will finish his presentation. Attorney Joel Z. Green represents Peter Metropoulos as trustee to The Thomas C. and Stella Maganas 1988 Family Trust, the owner of 36 Timothy Hill Road, as the intervenor.

Green started the presentation on behalf of his client Wednesday night.

A deep rocky impression left from the old graveling operation is on the north of the property. A dirt driveway on one side leads down to the center, which is partially filled with water.

Kevin Solli, the civil engineer for the project, explained how they want to raise the level of soil above it, so stormwater drains back into the wetlands system.

The intervenor is concerned over the fill that will be used, because water would run through it in an area near Aquarian Water Co. watershed property, which supplies public drinking water.

Green said the state definition of clean fill, that the developer wants to use, allows solid waste such as construction debris and asphalt millings — no smaller than four inch chunks. The intervenor wants the 980,000 cubic yards of fill to consist of natural dirt instead.

Evan Glass, president and senior hydrogeologist of ALTA Environmental Corporation in Colchester, was hired by the intervenor. He said piles of asphalt fragments, smaller than the allowable size, were in plain view during the site walk. Rebar and painted cinderblocks, which also do not meet the definition of clean fill were also on the site, he said.

Glass praised the goal of restoring wetlands, but expressed concern over water quality.

The Connecticut Department of Energy and Environmental Protection only inspects in response to complaints of violations, and by then it could be too late, according to Glass.

If the town wants to ensure there is proper quality control for the project, Glass recommends hiring a site monitor. He also suggested looking into DEEP’s Licensed Environmental Professional (LEP) Program.

“The LEP Verification Audit Program has been established to ensure that the opinions (“verifications”) of the LEP are based on an appropriate understanding of the environmental conditions of the site and that the verification is in compliance with all applicable statutes and regulations, including the RSRs (Remediation Standard Regulations),” according to the State of Connecticut’s website. 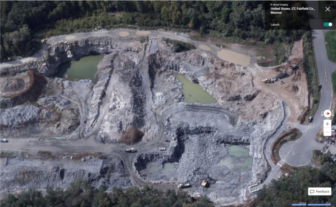 This older photo shows the cul-de-sac on Independence Drive at the bottom right. This is the point where the September site tour group went up hill and looked down onto a large hole. The areas of excavation in the upper left and right were already covered with fill.

David Bjorklund, a licensed engineer and president of Spath-Bjorklund Associates, one of the experts hired by the intervenor, showed a series of Google Earth photos, and one satellite image, from 2015 through 2020.

Bjorklund, who was on the property in 1990, before quarry activities took place, said the property looked a lot different.

The Google Earth photos showed areas of extensive excavations below the water table, which, with the exception of the large hole to the north, have since been completely filled in

Bjorklund said there needs to be soil testing in these areas to ensure the fill is DEEP approved and will not cause pollution in the future.