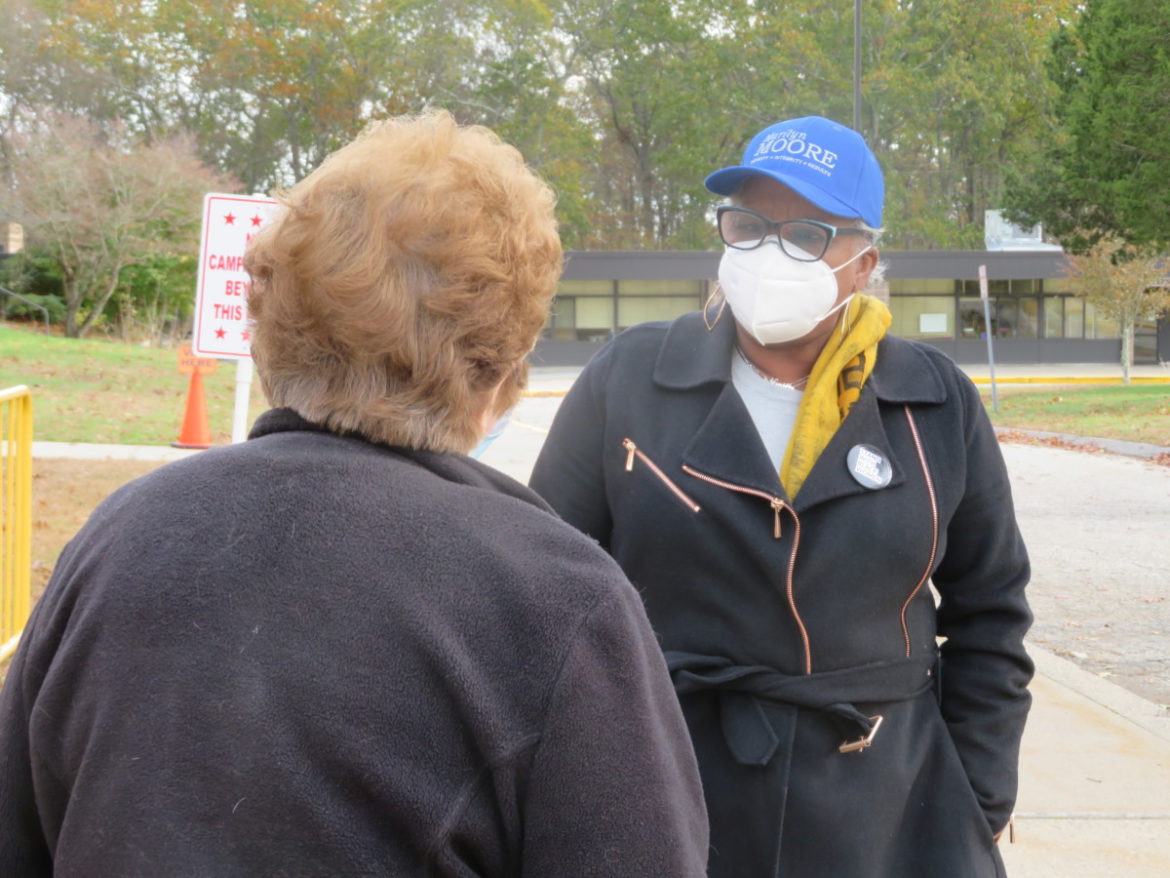 State Sen. Marilyn Moore, D-22nd, right, talks to Pat Chonko, outside the polls at Stepney Elementary School Tuesday. The women used to work together at SNET.

MONROE, CT — State Sen. Marilyn Moore appears to have held onto her seat in the 22nd District, which represents Bridgeport, Trumbull and a portion of Monroe.

The incumbent Democrat has 19,813 votes and her closest challenger, Republican Steven Choi, who had a strong showing in Monroe, has 15,767. Stephen Dincher, an Independent, is in third with 692 votes. Bridgeport is still counting its absentee ballots, but Moore said there aren’t enough to make a difference in the outcome.

“I appreciate the support of all the people who voted for me, and for those who did not, I hope I can earn their vote and confidence in the future,” Moore said.

Richard Deecken, Choi’s campaign manager, has yet to respond to phone calls and a text seeking comment for this story.

In Monroe, preliminary results from the Registrars of Voters Office had Choi with 2,062 votes, Moore with 1,673 and Dincher with 107. According to Trumbull Patch, Choi also outpaced Moore in his hometown of Trumbull 10,684 to 9,705, while Dincher had 378. But Bridgeport voters pushed Moore over the top on her home turf.

“It doesn’t matter where you live in Connecticut,” Moore said. “I’m a state legislator. I create laws for the whole state when I do something, but I also look out for anything that’s going to financially impact the community in Monroe, Trumbull and Bridgeport. I always look to support everybody: D, R,  if you live in those towns, you are my priority.”

Moore works across the political aisle. As chair of the Bonding Committee, she said she has been working with Monroe First Selectman Ken Kellogg, a Republican, in trying to secure funds for the Monroe Volunteer Emergency Medical Services’ building project at Jockey Hollow Firehouse.

In the Senate, Moore sits next to Sen. Kevin Kelly, R-21st, who also represents a portion of Monroe. “I say to Sen. Kelly, ‘when it comes to fighting for the people, we have to stand together,'” Moore said.

In 2014, Moore beat incumbent Democrat, Anthony Musto, a three-term incumbent, in a primary, before going on to win her first two-year-term against Republican, Enrico R. Costantini. She is the only African-American woman serving in the State Senate and only the third who was elected.

In addition to the Bonding Committee, Moore chairs the Human Services and Children’s Services committees.

In her new term, She said her first priority will be nursing homes and the health of Connecticut’s residents amid the coronavirus pandemic. “Nothing is more important than keeping our residents safe,” Moore said.