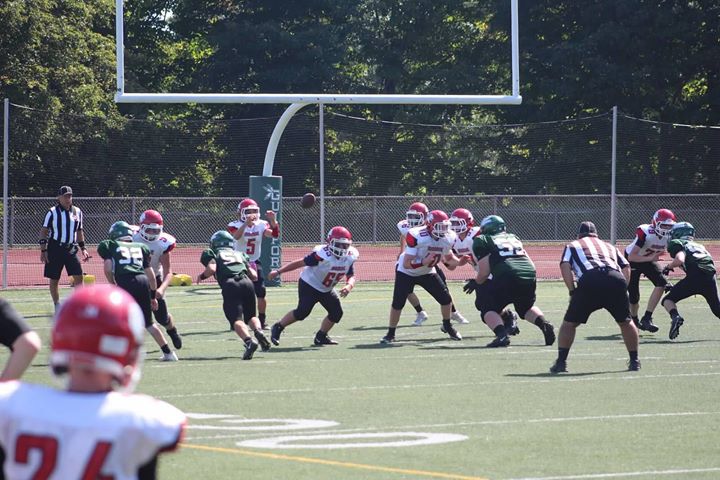 Lions quarterback Robert Klein takes a shotgun snap deep in his own territory in the game against Guilford on Sunday. Contributed

The Monroe Lions eight-graders faced a tough Guilford football team, searing heat and a 28-12 deficit Sunday, but showed determination and grit while battling back to within two points. However, a 2-point-conversion to tie the score failed and Guilford hung on for a 28-26 victory.

Guilford appeared to have broke the game open with a 38 yard touchdown run with 25 seconds left in the third quarter to increase their lead to 28-12, after Lions running back Jason Champagne’s 40 yard scamper had narrowed the gap to 20-12.

Lions Head Coach Joseph Kobza and his staff worked to keep their players hydrated in 85-degree heat throughout the game, on a day when a referee had to take himself out of the game due to dehydration. The Lions also weathered several injuries. 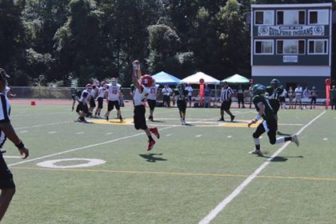 Lions receiver Trey Miglarese goes up for the catch. Contributed

Down by 16 points at the start of the fourth quarter, the Lions offense ignited a stirring comeback.

Quarterback Rob Klein completed a 30 yard pass to Trey Migliarese to Guilford’s nine yard line. Then Jack Sisson ripped off a seven yard run to the two, before Champagne barged in for the score.

Lions kicker, Matt Zeppieri, nailed the two point conversion and the Lions pulled to within 28-20.

The Lions recovered an onside kick and suddenly had a chance to tie the score.

On their very first play, Klein threw a screen pass to Champagne, who followed key blocks from the offensive line to breakaway for a 49 yard touchdown. The score was 28-26, but the 2-point conversion failed.

The lead changed hands early on during the thrilling football game.

The Lions jumped out front on their offense’s opening drive when Klein threw a 10 yard touchdown pass to Colin Hope early in the first quarter. The kick after failed, but Monroe led 6-0.

Guilford answered on its next possession with a five yard touchdown run and a two point kick for an 8-6 lead they would take into halftime.

Before the Lions’ exciting comeback, Guilford had a four yard touchdown run five minutes and 55 seconds into the third quarter, but the kick failed. Guilford was up 14-6 at that point.

In other Lions games from last weekend, the seventh graders blanked Southington 35-0, the sixth-graders fell to Shelton 33-0, the fifth-graders dominated East Haven in a 31-0 win; the fourth-graders ran into a tough North Haven squad losing 20-0, and the third-graders outscored Newington in a 26-16 win.