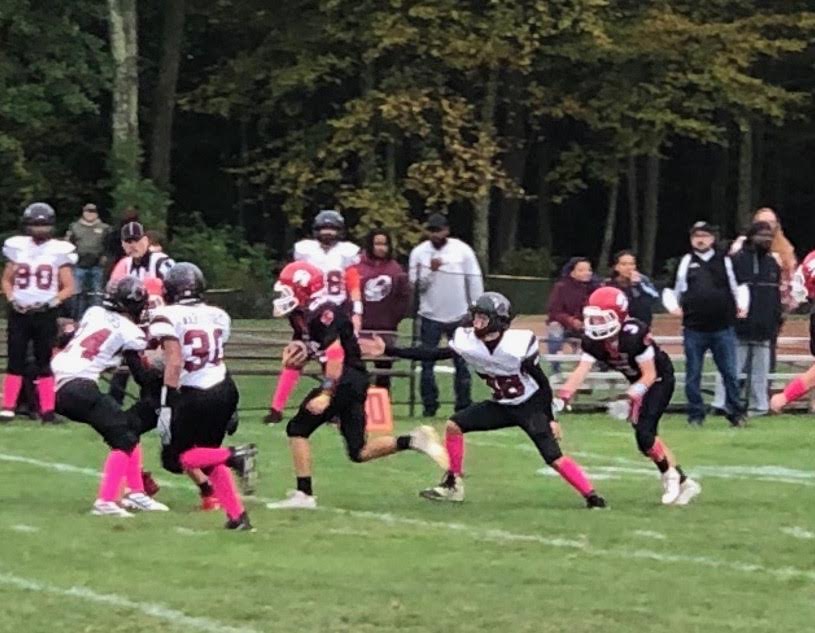 The Monroe Lions eight-graders exploded to a 24-0 lead over the Torrington Warriors in the first half of last Sunday’s game at Wolfe Park, then held on for a 38-21 win, snapping a two game losing streak.

Head Coach Joe Kobza’s squad improved their record to 3-2, but the Lions will have a big challenge this Sunday when they travel to Southington High School for a road game against the undefeated Southington Knights at 1 p.m. The Knights crushed Newington 32-0 to move to 5-0.

Last Sunday, the Lions jumped out to a 6-0 lead over Torrington when quarterback Rob Klein connected with Matt Zeppieri on a scoring pass eight minutes into the first quarter. Zeppieri kicked the two-point conversion to increase the lead to 8-0.

On the first play of the Warriors’ ensuing drive, Luke Eschert intercepted a pass for the Lions, giving Monroe the football.

It remained a one-score-game until the Lions’ offense got going late in the second quarter. Zeppieri’s 34-yard catch and run moved the ball to Torrington’s four yard line with 3:10 left in the half.

Running back Jason Champagne followed blockers to the one yard line on the next play, but a holding penalty pushed the ball back five yards to the eight.

The Lions would not be denied. Klein overcame the Lions’ mistake, throwing a touchdown pass to Zeppieri, who booted the two-point kick though the uprights for a 16-0 Lions’ lead with 1:06 left in the first half. 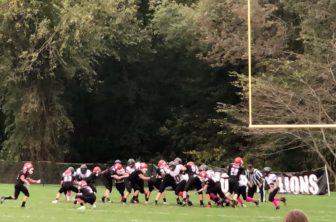 Matt Zeppieri attempts a two-point kick after a Lions’ touchdown against Torrington Sunday. He made four of them in the Lions’ 38-21 win. Contributed

A Torrington runner fumbled on the next possession and there was a mad scramble for the ball. Champagne emerged from the pile of players with the ball in his hands and raced 49 yards for a score.

Zeppieri made the kick after and the Lions were suddenly ahead 24-0.

But the Warriors mounted a drive, scoring on a five yard touchdown run with only three seconds left and kicking the two point conversion to narrow the gap to 24-8 at the half.

Torrington continued to draw closer with a 15-yard touchdown pass with 1:47 left in the third quarter, but the two point kick failed.

Klein hooked up with Champagne on a 48-yard touchdown pass to increase the Lions’ lead to 32-14 with 50 seconds left in the third quarter. Then Zeppieri’s kick increased it to 34-14.

Klein made another big play, this time on defense. He intercepted a 25 yard Torrington pass eight minutes into the fourth quarter, then hit Zeppieri for a score on the ensuing Lions’ possession. The kick failed, but the Lions held a commanding 38-14 lead.

The Warriors went down fighting, scoring from three yards out and converting an extra point with 32 seconds left, but it was too late and the Lions had earned a 38-21 victory.

The Monroe Lions’ other grades also had success on the gridiron on Sunday, Oct. 6.

The seventh graders enjoyed a 43-14 romp over Cheshire.

The Lions also have a pair of undefeated teams, who kept up their winning ways. The sixth graders beat Branford 33-16 and the third-graders hung on for an exciting 28-20 triumph over Shelton.

The fifth graders ran into a tough Cheshire team, losing 35-0.