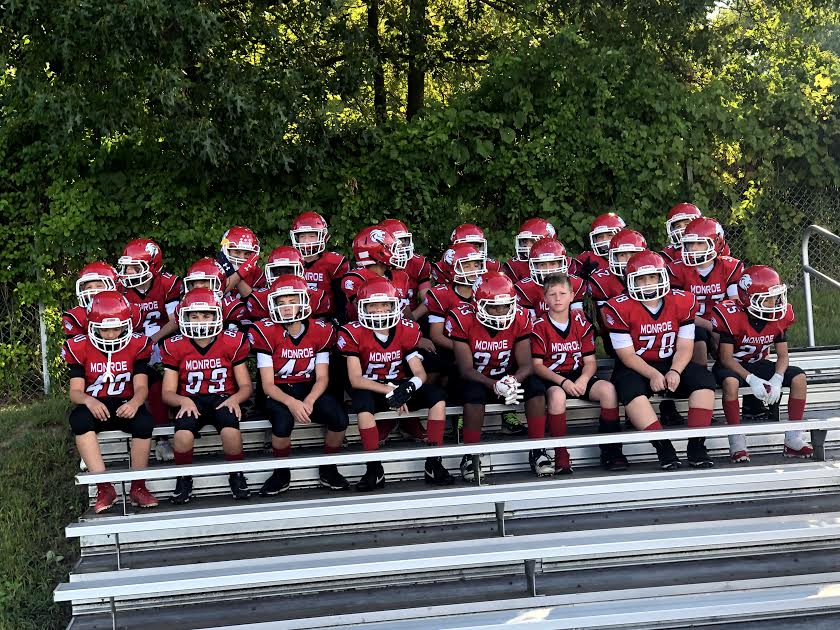 The Lions seventh-graders pose for a team picture. Contributed

Monroe Lions players on the seventh-grade football team lost to the North Haven Indians twice last year, but a week of hard work on the practice field and hours of study in the film room paid off last Sunday in a convincing 40-12 Lions victory at Wolfe Park.

The win came on the heels of a week one triumph over a tough Glastonbury team, improving Monroe’s record to a perfect 2 and 0.

Working behind an offensive line led by David Marciano and Sebastian Nicholas, Lions running backs burst through huge holes to rack up yardage on the ground and quarterback, Jason Pagano, enjoyed a clean pocket and time to throw downfield for big plays all day.

Pagano completed 15 of 17 passes for 205 yards and four touchdowns, while also rushing eight times for 91 yards.

The Lions defense set the tone on North Haven’s first possession, forcing the Indians to go three and out.

Then Monroe’s balanced offense mixed the run and the pass to move the ball down the field.

Pagano looked sharp right out of the gate, completing all four of his passes.

The opening drive featured big plays from Elijah Belizor, who hauled in a 25 yard pass from Pagano, and Bouton who caught three more passes for 35 yards and a touchdown.

The extra point put the Lions ahead 7-0.

The Indians responded quickly with a 54 yard touchdown run, but missed the extra point.

With the Lions up 7-6, North Haven tried an onside kick in an attempt to surprise Monroe and regain possession. But the Lions recovered, giving their offense great position at midfield.

Pagano did not waste any time, hooking up with Ryan Putnam for a 48 yard touchdown pass.

Putnam had a big day, gaining 86 all-purpose yards. He finished the game with three receptions for 61 yards and a touchdown. Putnam added 25 yards rushing on five carries with another touchdown on the ground.

Once again, the Indians answered quickly with another long cut back run for 48 yards and a score.

The Lions clung to a 14-12 lead, but their offense looked unstoppable. As the first quarter was winding down, the Lions put together another impressive drive, mixing the run with the pass while keeping North Haven defenders on their heels.

The drive was highlighted by a 23 yard Pagano run up the middle and a 19 yard connection from Pagano to Bouton for yet another touchdown and extra point.

By the time the first quarter ended, the Lions were up 21-12.

After giving up two early touchdowns, the Lions’ defense settled down. Led by Marciano, Nick Fox, Billy Alvarado and a big tackle by Carter Smetak, Monroe stopped North Haven’s offense and got the ball back.

Now in the second quarter, the Lions’ offense remained red hot and continued its onslaught.

Bouton capped off the drive with his third touchdown of the day, scoring on an 11 yard run.

Pagano later hooked up with Belizor on a beautiful throw and catch for a 21 yard score.

The Indians’ offense tried to close the gap, but Bouton ended North Haven’s drive and closed out the first half with an interception from his safety position.

The Lions led convincingly at halftime 34-12.

Running out the clock

The Lions would add one more score in the second half, when Putnam rushed for a five yard touchdown — his second score of the game.

Monroe played more conservatively the rest of the way, protecting its big lead by running the ball behind its talented offensive line to milk the clock.

The Lions’ defense remained stout, keeping the Indians out of the end zone, while preserving the 40-12 win.

Lions Head Coach Steve Christy said the boys worked so hard during the week and it showed on the field Sunday. Christy said he was happy with the play on both sides of the ball and was excited to give his team a couple days off heading into their bye week.

The Lions’ next game is Sunday, Sept. 22, in Southington, where they will try to stay atop the Shoreline standings.

A roundup of Lions’ scores

The Lions third graders beat Bristol 34-0 and the Lions fourth graders also enjoyed a shutout with a 33-0 win over Newtown.

The fifth graders lost an exciting game to Madison, 31-19.

The sixth-graders ran into a tough Newington team, losing 27-0.

Lions eighth graders continued to roll with a 49-19 win over Bristol.