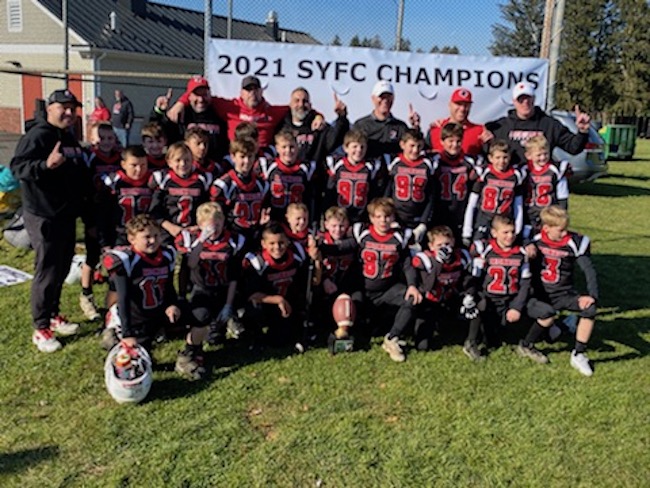 Lions Coach Scott Ely said his team of fourth-graders played great all season, posting a 9-1-1 record and winning the Shoreline Championship on Sunday.

CHESHIRE, CT — Monroe’s fourth-grade Lions football team scored first against Pomperaug in the championship game of the Shoreline Youth Football Conference’s Championship Series, played at Cheshire High School Sunday, then held on for a 7-6 victory and the title.

“I’m so proud of these kids and how far they’ve come this year,” Head Coach Scott Ely said Monday. “This is just the tip of the iceberg. They have a bright future ahead of them.”

The Lions finished with 9 wins, 1 loss and 1 tie. Their record includes three playoff games, a 25-0 win over Cheshire, an 18-6 triumph over Wallingford, and Sunday’s win over Pomperaug.

On Sunday, Ely said Monroe and Pomperaug fans came out in full force to support their football teams. “It was crazy. It was loud,” he said.

The Lions gave their fans something to cheer about when they jumped out to a 6-0 lead in the first quarter. Running back Mason Callahan broke free for a 15 yard scoring dash. Then Jordan Castillo scored the extra point on an inside trap play making it 7-0, according to Ely.

“The whole offensive line did great all day,” the coach said.

Pomperaug answered with a touchdown of its own in the second quarter, narrowing the gap to 7-6. Instead of trying to tie the game with an extra point, the Warriors decided to go for a two-point-kick to take the lead.

Ely said Pomperaug has a good kicker, but the Lions got good penetration on the play, forcing a miss while allowing Monroe to stay on top 7-6.

The Lions appeared to break the game open in the second half, when Roman Roche burst through the line for a 60 yard touchdown run. But Ely said the Lions were penalized for a push from behind on the run, wiping out the score.

After both teams scored in the first half, their defenses refused to budge the rest of the way.

“It was a defensive fight all day long,” Ely said. “Our kids were flying around, playing great defense.”

Ely said Callahan was “making tackles all over the place.” Other key contributors on the defensive side of the ball were Mason Alderman, Roman Roche, Caden Kozera and James Ely, the coach said.

Linebacker Brandon Ewald had a big interception for the Lions in the fourth quarter, helping to seal the win, according to Ely.

The biggest threat the Lions faced was when Pomperaug’s offense had a first and goal. With their backs to their own goal line, Monroe refused to give in.

“Callahan made a big stop,” Ely said. “There was a lot of gang tacking, but Callahan had some touchdown-saving-tackles.”