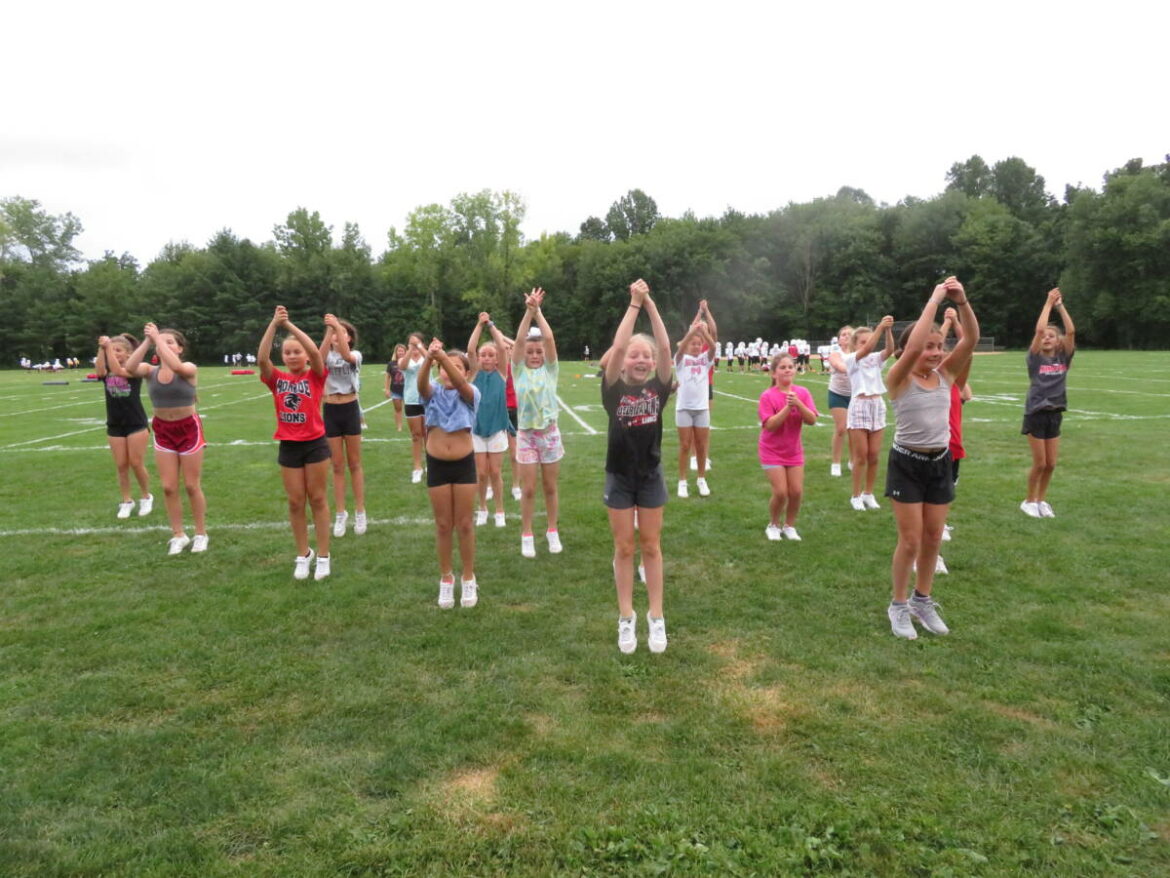 MONROE, CT — Two years removed from winning the American Youth Cheer National Championship in 2018, Monroe Lions cheerleaders practiced their routines and stunts on Dom Quinto Field at Wolfe Park Wednesday evening. The COVID-19 pandemic kept them from competing last year, so the girls are eager to make a splash this season.

It is a year of change. Coach Amy Guerra’s program joined Pop Warner this year and the girls will don new uniforms.

“It’s so exhilarating and exciting,” Guerra said. “We did a small 12-week program last year and had a little routine for their parents. It wasn’t our normal season. But coming back into it everyone is so excited. The girls are on top of the world.”

“It feels good. I’m excited,” Olivia Fensore, 11, a Jockey Hollow sixth-grader, said of cheerleading again. “I enjoy the competitions and practicing with my friends.”

Olivia has been cheerleading for six years.

Angelina Guerra, 10, a Monroe Elementary School fifth-grader, and Emma Esteves, 9, a Fawn Hollow fifth-grader, are both embarking on their fifth year of cheer.

Angelina and Emma said they like the competitions and the stunts. Both girls are the base for the basket tosses, a stunt in which a girl is thrown up into the air and caught by her teammates.

Of competing, Olivia said, “I get a little nervous before we first go on.”

The Monroe Lions have a total of 58 girls on their three teams. The Pee-Wees are the big team with girls ages 10 to 13, the Mighty-Mites are ages 7 to 9 and the Tiny-Mites are for girls age 5 and 6.

There are no tryouts, just signups. Though there is a cutoff for registration.

“Everyone has their own skills and skill levels,” Guerra said. “We find out what they excel at. Everyone deserves a chance.”

Through their experience on the Lions, Guerra said she wants the girls to learn about teamwork, dedication and discipline. “We become a family,” she said. “Everyone’s there for each other. It’s very similar to every other organized sport.”

“You learn to work with others,” she said, “and not just on the team. At competitions you cheer for the other girls.” 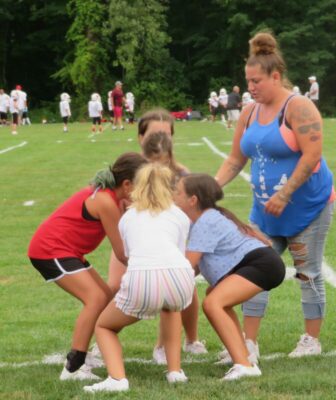 Coach Amy Guerra, right, helps girls on her Pee-Wee team with their fundamentals during a practice at Wolfe Park Wednesday.

Guerra, who grew up in Monroe, was a cheerleader for the Lions and the Masuk Panthers. While in high school, she coached the Lions. Guerra also coached into her 20’s and she has been coaching the Lions for the last six years.

“It’s a passion,” she said of cheerleading. “It’s something I’ve done since I was little and I want everyone to have the great experiences that I had.”

Guerra said she made lifelong friends, including Marissa Esteves, who she met cheerleading at Masuk. Esteves is on her coaching staff for the Pee-Wees.

Other Pee-Wee coaches include Carissa Fensore, RaeAnn Dombrowski, who also went to Masuk, and rising Masuk senior Juliana Pagano. Pagano was a cheerleader for the Lions growing up and she has been a Masuk cheerleader since her junior year.

“I started cheerleading in the fourth grade,” Pagano said. “Competing is fun and as a kid I always loved to perform.”

Pagano said she likes the atmosphere of cheerleading, adding, “I used to dance and I like to tumble and this puts it together.”

She has been coaching youth cheer for five years.

“I just love the girls,” Pagano said. “They’re like my little sisters. I also just like teaching,” she added of sharing what she learned.

Marissa Esteves said Pagano worked to form a connection between the girls and Masuk’s cheerleading program. This year the Lions will practice with the older girls, before cheering with them during a Panthers’ football game. 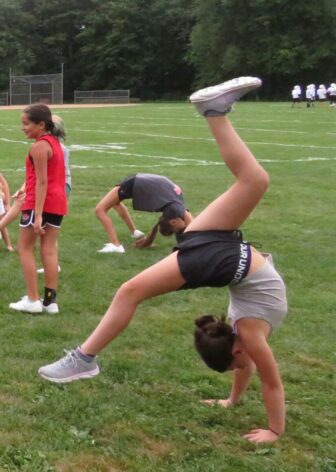 Cheerleaders are judged by their performance on jumps, tumbles, dancing and stunts.

The Tiny-Mites learn the basics of cheerleading, while creating new friendships. Medals are awarded among themselves. This year the team has a new coach, Erika Philbin.

Guerra said the Mighty-Mites is the level where the girls first learn to prepare and face outside competition. With at least one year of experience under their belts, these girls do more stunts, where teams lift girls up.

Felicia Anzalone, who grew up in Monroe and went to Masuk, will coach the Mighty-Mites this year.

By the time the girls reach the Pee-Wee level, most will have done cheer for five years.

“A lot of them were on the team when we won the title in 2018 and we’re shooting for it again,” Guerra said.

Pagano said teams are judged by their timing and how they perform different jumps and stunts, like the basket toss, as well as backhand springs, back walkovers, tumbling, dancing and pyramids.

The girls also must maintain smiles throughout their routines. Pagano said it’s “engaging the judges with your face.”

One requirement for a cheer team is to do sideline cheering at football games. Because the Lions football team stayed in the American Youth Football league, the Lions cheerleaders cannot cheer for them this year.

Ansonia’s football team is in Pop Warner, while its cheer teams are in AYF, so the Monroe Lions will cheer at Ansonia football games.

Their first tournament will be the Connecticut State Championship at Floyd Little Field House in New Haven on Oct. 9.

Then on Oct. 24, the Northern Connecticut Championship will take place at the same location. This is where teams earn their local rankings.

Top ranked teams compete in their groupings at the Regional Championships at the Tsongas Center at the University of Massachusetts in Lowell on Nov. 6. Guerra said first place finishers and second place teams with enough points will advance to the Nationals.

The National competition will be held at Universal Studios in Orlando, Fla., in early December. 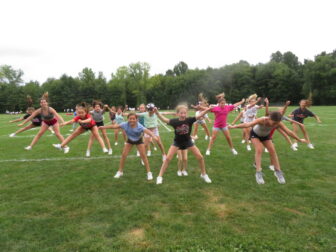 A fundraiser for the Lions’ new uniforms is underway at Snap-Raise.com. To make a donation, click here. The generous support of donors offsets the costs for families. There are 18 days left.

To support the program, the team plans to have other fundraisers throughout the year.