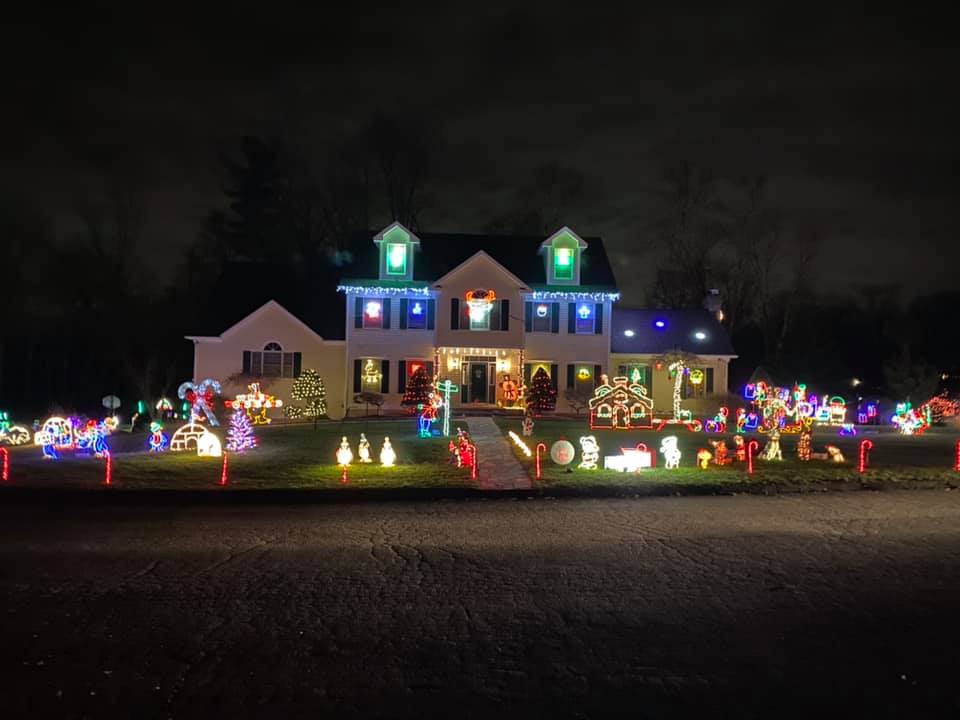 This holiday display of Christmas lights at 36 Admiral Drive is among 46 entrees in the Light up Monroe contest.

MONROE, CT — Residents visiting the Connecticut Office of Tourism website in search of fun things to do can now find Light up Monroe, a Monroe Playground Foundation fundraiser featuring home displays of Christmas lights and decorations, among the events.

The friendly contest among 46 homeowners is raising money for a community build of the Wolfe’s Den, a new playground that will replace Kids Kreation at Wolfe Park.

“Our goal with Light up Monroe was to create added joy for the town and its residents in an otherwise difficult year, something that could be shared by families, friends and neighbors, as well as strangers,” said Michael Ganino, treasurer of the foundation.

Ganino said the Connecticut Office of Tourism responded within two days of his submitting an online application to have Light up Monroe included on its website. 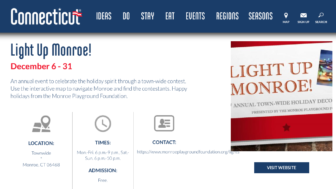 The event on the website says “Light Up Monroe!” runs through Dec. 31 with the description: “An annual event to celebrate the holiday spirit through a town-wide contest. Use the interactive map to navigate Monroe and find the contestants. Happy holidays from the Monroe Playground Foundation.”

“The Monroe Playground Foundation was so excited to learn that the Connecticut Department of Tourism added Light up Monroe as a destination event for things to do in our state,” he said. “We’re proud of our town and the residents, who participated to Light up Monroe.” 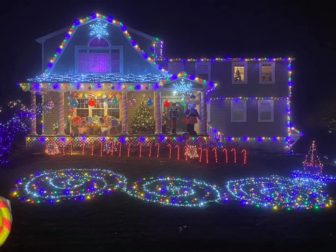 The display at 133 Old Castle Drive features candy on the porch with a candy cane-lined walkway.

Dan Keene, chairman of the Monroe Playground Foundation, designed an interactive map and devised an online voting system to allow residents one vote-per-day for the People’s Choice Award. Voting will go on through Friday.

A panel of judges are voting and all of their ballots must be in by Saturday night. They are voting through a cellphone app called Zoho Creator.

Clark Griswold Award: The winner of this award has never looked at their house and thought, “too many lights!”

Best Use of Animation: Bring your winter wonderland to life by adding motors and movement.​

“Our team of judges is 25 strong and comes from all walks of Monroe life: town, business and church leaders, volunteers, local celebrities, as well as educators,” Ganino said. “Upon seeing the list of fellow judges, one of them commented that it was like ‘Dancing with the Stars.’”

Keene is working to create a virtual event, The Monroe Holiday Spectacular, that can be seen at 4 p.m. on Sunday, Dec. 20. Ganino said the winners will be announced and the event will feature some surprises.

Eye on the prize 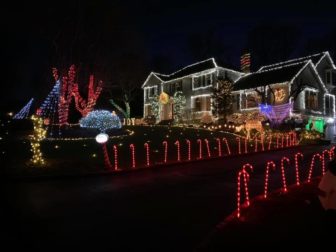 Among the contenders in the Light up Monroe contest is this display at 10 Stonewall lane.

The Monroe Playground Foundation must raise over $400,000 to make the Wolfe’s Den happen. Through a series of fundraisers and private donations, volunteers have raised about $135,000 so far.

Prior to COVID-19, volunteers have held dinners and character nights. Since then, they’ve held social distancing events, such as an ice cream social and photos with Santa and Mrs. Claus held last Saturday, where cars could stop under a tent on the Great Hollow Lake side of Wolfe Park for pictures. Ganino said the event attracted over 120 cars.

Other events, including a virtual Bingo, are in the works.

In addition to being able to donate online, residents may also sponsor playground equipment directly. Ganino said there are still fun things to sponsor, including slides, a chin-up bar and a climbing wall.

“People can also buy a picket on the fence for a $100 donation and personalize it with their name, kids’ names, family names … it’s very popular,” he said.

The first step in construction, when over 2,000 community volunteers build the playground over a period of five or six days, is surfacing the playground, which currently has woodchips.

Ganino said the new surface will be made from poured in place rubber, making for a surface smooth enough for wheelchairs and kids on crutches.

He said one of the most exciting things about the new playground will be the accessibility for all children. For example, Ganino said a ride that’s like a little merry-go-round allows the option of latching on a wheelchair, so a child who is handicapped can play with other kids.

“The generosity of families and businesses and community groups has been tremendous,” Ganino said. “It’s really a grassroots campaign to fund the playground, but it’s not just about donations. It’s about people’s time, because our volunteers are the backbone of what we’re trying to accomplish. If it wasn’t for our volunteers, we wouldn’t be able to do any of the events and fun activities that we have.”

“The Monroe Playground Foundation is grateful for everyone’s support and hopeful for the future, as we fund and build the Wolfe’s Den Playground,” he said. 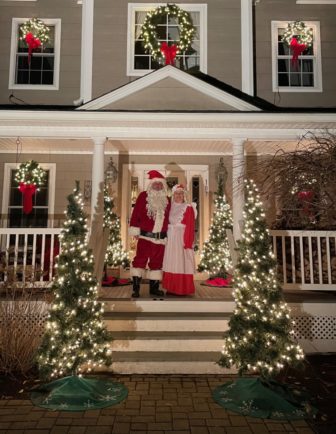 Santa and Mrs. Claus appeared at this home at 187 Hattertown Road.

When the Monroe Playground Foundation creates a fundraising event, Ganino said the criteria is always for it to be safe family fun that brings the community together, adding the foundation has received positive feedback for Light up Monroe.

“Families are going out every night to look at the houses and it’s brought a lot of families together,” Ganino said. “One mother told me she goes with her 15-year-old-son and they do nothing but talk and look at the houses. It’s been a bonding experience.”

Some close friends have rented a limousine and made an event of it. Ganino said that is something that could be more common next year, after the pandemic.

The Light up Monroe Facebook page garnered over 1,300 members to the group in a little more than one week. Ganino is encouraging as many people to join as possible, to increase viewership for The Monroe Holiday Spectacular.

“We’re already planning Light up Monroe 2021 and intend to include at least separate pre-set routes with the possibility of guided mini-bus tours for those who’d enjoy the experience … complete with hot cocoa and cookies,” Ganino said. “We’re very excited at what the future holds for this event and in our ability to raise funds to build the Wolfe’s Den Playground.”