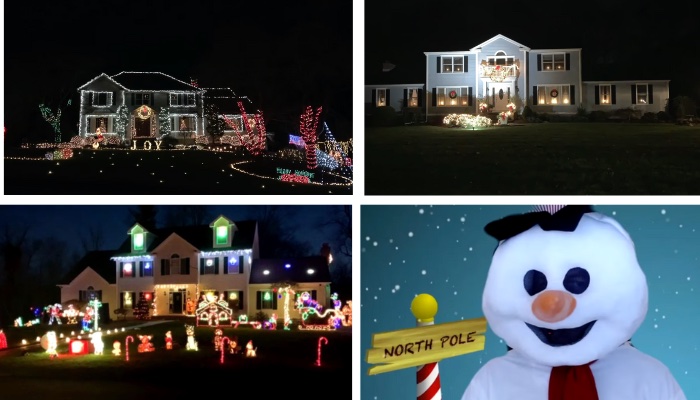 MONROE, CT — Families are still driving along the trails of houses and yards decorated with bright Christmas lights and holiday displays as voting for the Light Up Monroe contest continues.

The Monroe Playground Foundation event, which spawned an annual tradition, is now in its third year. Once again, it’s highlighted as a go-to destination on the Connecticut Office of Tourism’s listing of things to do in the state — and the Christmas cheer it brings has gone viral.

“We were approached by people in two towns asking us to help them get their own ‘Light Up’ contests going,” said Michael Ganino, vice president of MPF, though he declined to share which towns because meetings are still being held.

He said the Monroe Playground Foundation got its idea for the contest from Newtown and, since the contest in Monroe began, Ganino learned about Trumbull and Milford hosting similar contests.

Ganino credits Dan Keene, chairman of the Monroe Playground Foundation, for the online voting feature and mapping out the routes for Monroe’s contest.

This year, 22 homes are participating and Keene broke it up into three trails with seven to eight houses on each. For directions and online voting information, click here.

“You can download the map, put it in your gps and go from house to house to house,” Ganino said. “Dan was able to create the loops in a way where you don’t have to back track. You can also visit all the houses in one loop.”

Every year, Keene, an executive with the WWE, uses his TV experience to make a video production of “The Monroe Holiday Spectacular” a special hosted by Snowy the Snowman to announce the winners.

Voting will go on right up to Christmas Day and release of “The 2022 Monroe Holiday Spectacular” will be announced. For updates, visit Light Up Monroe’s Facebook page, which has close to 2,000 followers.

Light Up Monroe contestants compete in seven different categories, including:

“We added a category for a kid designed display,” Ganino said of Let the Elves Help!.

He said contestants compete for bragging rights and prizes.

The grand prize for the People’s Choice Award is use of a bounce house and a six foot grill. The Monroe Playground Foundation will provide food to feed 50 people at a picnic, according to Ganino, who said other prizes include gift cards.

A panel of judges vote for the winners, but everyone can participate in an online vote for the People’s Choice Award.

Ganino said each contestant has a sign in front of their house with their entry number along with a QR code people can scan with their cellphones to vote online.

“In the past you could vote once a day, but we decided to model it after the farmers’ market, where you get one vote per person throughout the course of the contest — and we’ve had great turnout so far,” Ganino said.

“We hope to build this even bigger every year and have people enjoy seeing Monroe at its best with Christmas lights,” he said of the contest.