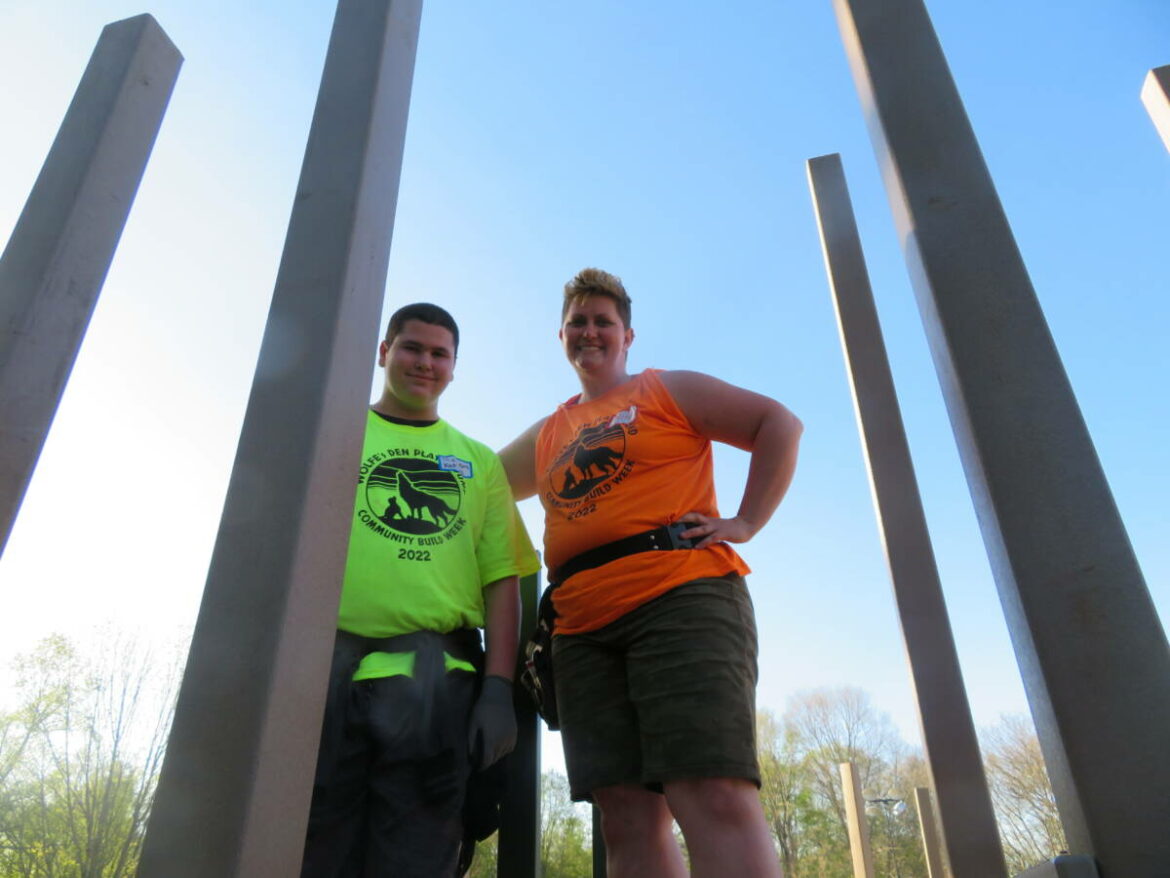 Shalom Kaplin, 15, who has special needs, is among the volunteers building The Wolfe's Den playground at Wolfe Park. Nina Gagnon, a team captain, has taken him under her wing.

MONROE, CT –Michelle Widdows thought it would be a good experience for her son, Shalom Kaplin, 15, who is autistic, to be outside helping with the community build of the new Wolfe’s Den playground at Wolfe Park — she just didn’t know how good.

Shalom volunteered on Tuesday and Wednesday, and on Thursday his face lit up and he smiled while talking about the project as he ate dinner under a tent with the other volunteers. His mother said he talks about it all the time. 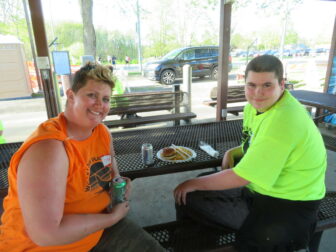 Nina Gagnon, left, a captain for the community build of The Wolfe’s Den playground at Wolfe Park, and volunteer Shalom Kaplin, 15, have become fast friends.

“I didn’t think he would like it so much and now I wish it was every day of the year,” Widdows said.

She said her son is not the only child with special needs that the Monroe Playground Foundation has allowed to be part of the build for the playground, which will be inclusive for children of all abilities, allowing for side-by-side play.

“My mom brought me down and signed me up for a shirt,” Shalom said. “I put dirt in one hole and patted it down and I put dirt in a wheel barrow.”

On Wednesday, Shalom volunteered with his older sister, Dassi, 18.

“Shalom has been a big help,” said Nina Gagnon, the team captain who immediately took a shine to the teenager. “Everyone in our crew just enveloped him and brought him in as a family, and it has just great to involve him and encourage him.” 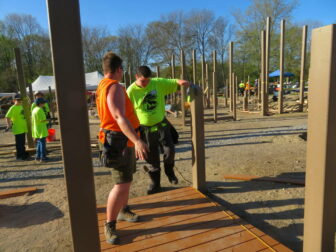 Nina Gagnon, left, and Shalom Kaplin inspect a ramp of The Wolfe’s Den playground currently under construction at Wolfe Park.

“It’s actually fun,” Shalom said. “You get to go on the dirt. I dug with a shovel and this,” he said, pointing to a trowel on the table.

At one point, Gagnon said Shalom used an empty coffee can to dig with.

“He didn’t wear boots the first day,” Gagnon said. “The second day he was so proud to wear his boots.”

His plate still had a pile of macaroni and cheese on it, but Shalom was anxious to get back onto the construction site. He pointed to a large, blue aluminum piece at the back of the site and asked Gagnon what it was. 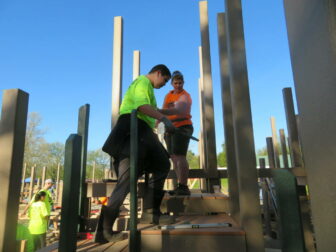 Shalom Kaplin, left, climbs the steps for the Castle Hideway, a component of The Wolfe’s Den playground under construction, with a little help from Nina Gagnon.

“Can I do that?” Shalom asked.

Unfortunately, he is too young to handle that part of the project, according to Gagnon. After dinner, she and Shalom walked the site.

Before walking onto a ramp together, Shalom crouched down and touched it with his finger. “It’s safe,” he told Gagnon.

The duo later climbed up to a platform, where the Castle Hideout will be.

“You’re on the highest part of the playground,” Gagnon exclaimed, before they climbed back down. “Let’s go down,” she said. “Little steps.” 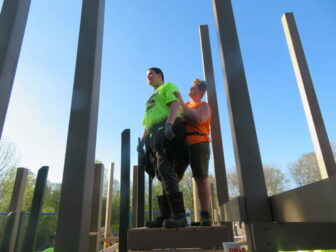 Shalom’s experience volunteering for the community build of the playground has influenced at least one of his future aspirations.

When he grows up, he said he wants to be a car mechanic, a construction worker and to work at GameStop, because of his love of video games like “Fortnight”.