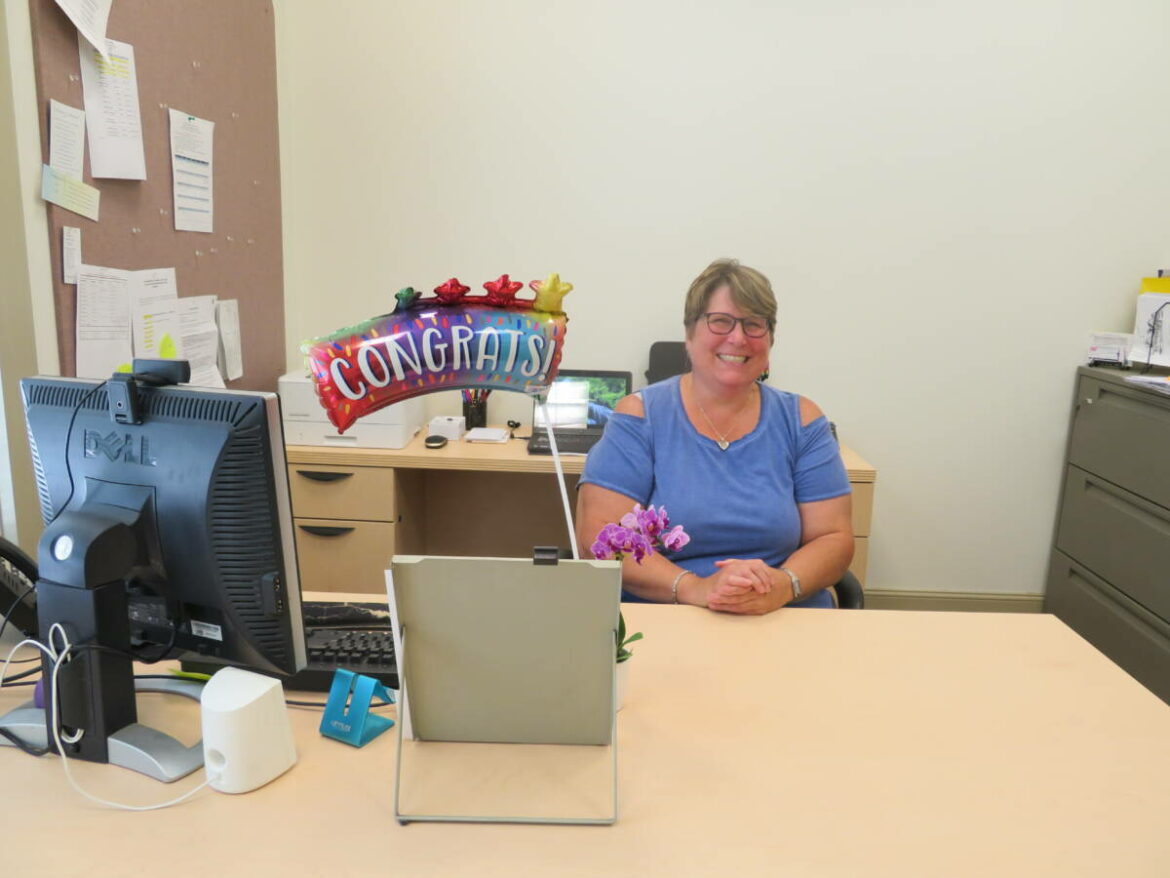 Kim Cassia, a well-known firefighter and EMT in town, was hired as Monroe's new Community and Social Services director, a promotion from her position as administrative assistant.

MONROE, CT — Many know Kim Cassia for her service on the Monroe Volunteer Emergency Medical Service and the Monroe Volunteer Fire Department, or through her work at the Monroe Senior Center, where she enthusiastically engages in friendly banter with its members. Now she is the town’s new director Community and Social Services.

“I’m very honored to be selected as the director and I look forward to the new challenges,” Cassia said during a recent interview. “I’ve got a great team to work with.”

First Selectman Ken Kellogg issued an announcement asking residents to join him in congratulating Cassia, who will fill the shoes of Henna Ali, who moved to Florida with her family.

“As many of you know, Kim has been with this department in the Town since 2008, starting as our Elderly Services Coordinator and most recently as an Administrative Assistant,” Kellogg wrote. “In that role, as well in her capacity as a volunteer for both Monroe EMS and the Monroe Fire Department, she has contributed an enormous amount of her skills and time for our community.”

“Kim has a solid understanding of our Senior Center and Social Services programs, and has established strong relationships with many of our residents that utilize those services,” he continued. “This was most evident in her support of our COVID-19 response, with our Senior Center playing a critical role in communicating with and vaccinating our residents.”

Cassia, who had served as acting director when Ali went on maternity leave from January to February, then headed the department after Ali’s last day on May 14, was hired at a starting salary of $70,000.

“We were sad to see her go,” Cassia said of Ali. “We wanted to chain her to her chair, because she was such a good director.”

Cassia already has a good rapport with her staff.

“We are in great support of Kim getting the position as director,” said Ronnie Jensen, the town’s elderly services coordinator. “She is the heart of the senior center.”

Among her other responsibilities, she will prepare reports for the first selectman, the Commission on Aging, state, federal and other agencies; prepare and maintain department budgets and expenses.

A family of police officers

Cassia grew up in the Riverside section of Greenwich. “Most of my family were police officers,” she recalled.

Cassia’s uncle, Thomas G. Keegan, retired as chief of the Greenwich Police Department and went on to be elected as a state representative in South Carolina. Her uncle, Paul Keegan, retired as a sergeant in Greenwich and his sons also served in the department with one retiring as captain of detectives and the other as a lieutenant.

Cassia’s father, the late Francis H. Keegan Jr., who was well known as the director of Parks and Recreation in Greenwich, had a big influence on her.

“He started out as a recreation supervisor and built it up to a magnificent department before he left,” Cassia said of her father. “I try to be like him. He was a man of the people.”

When the town wanted to throw a retirement party for him, Cassia said her father insisted that it be held in the office, so everyone on staff could attend, from the guys who cut the trees to those who ran the beaches.

Cassia was a camp counselor in town, eventually working her way up to a camp administrator. “I worked as a first aider for the beaches and checked passes,” she said.

Cassia was active in her community at an early age.

“I was always involved in something,” she said, recalling how she was in a church youth group at St. Catherine’s in Riverside and had joined another group with a friend, who went to First Congregational Church in Old Greenwich.

Cassia also volunteered for the Summer Youth Festival. “I was on lighting and worked with the backstage crew — somewhere in that was the Red Cross,” she said.

When she was 14, Cassia volunteered for the American Red Cross. “We did fire and first aid standbys,” she said. “A group of us wanted to do more.”

Cassia trained to become an emergency medical technician. Then she became a firefighter, because an ambulance company operated out of the Sound Beach Volunteer Firehouse in Old Greenwich.

Cassia first met her husband, Dennis, a longtime firefighter with the Monroe Volunteer Fire Department, when he taught a class at her fire department.

“I came up here and did a Fire Instruction 1 class and everyone said, ‘he likes you. He likes you,'” Cassia recalled.

Cassia, who graduated from Greenwich High School in 1981, earned a bachelor’s degree in therapeutic recreation from the University of Connecticut’s School of Education. But she did not expect to embark on a career working with senior citizens.

Cassia remembers a man named Willy, who was impressed that she was a firefighter. Willy had volunteered as a firefighter on Greenwich’s Bucket Brigade, which responded with horse drawn wagons carrying buckets of water.

On his 105th birthday, Cassia coordinated with the Greenwich Fire Department to make the day a memorable one. “They came with a ladder truck and gave him a ride, and gave him a helmet,” she said with a smile.

Cassia was the therapeutic recreation coordinator at the Nathaniel Witherell Nursing Home in Greenwich from 1985 to 2000. She also had a stint at Heritage Heights Health Care Center in Danbury, before serving as director of therapeutic recreation and volunteer services at St. Joseph’s Manor in Trumbull from 2001 to 2008.

Aside from nursing homes, Cassia has been employed as a paid EMT and as an adjunct professor of therapeutic recreation at Norwalk Community Technical College.

She had applied for the the director of Community and Social Services position in 2008, when Barbara Yeager was hired. Then Catherine Lombardi, the town’s human resources director at the time, recommended that Cassia apply for the open elderly services coordinator position.

Cassia was hired and worked closely with the director of Community and Social Services. She was also the town’s outreach worker, municipal agent and VA representative.

When the director of Community and Social Services director position opened up again this year, Cassia said she felt her experience made her well rounded for the job.

Cassia said she enjoys working with people and getting to know the seniors who regularly visit the Monroe Senior Center.

“How can you not love them?” she said. “It’s not only their history. Their generation … they’re warm and caring.”