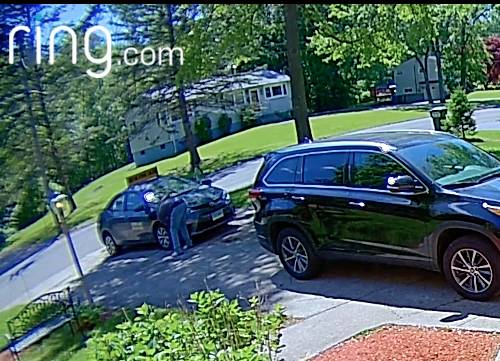 This screenshot from Michelle Widdows' Ring camera video shows a Kiddie Kabz driver, who appears to be trying to fix the damaged bumper of the Toyota Corolla he was driving. The driver was involved in a two-vehicle-crash on Monroe Turnpike May 27, while he was taking Widdows' son home. Police say the driver, who reportedly is no longer employed by Kiddie Kabz, evaded the scene.

TRUMBULL, CT — A driver for Kiddie Kabz allegedly watched a video on his cellphone moments before rear-ending a Honda CRV on Monroe Turnpike, while driving an autistic 15-year-old Monroe teen home from ACES Whitney Academy in Hamden on May 27. Then police say he drove off without waiting for officers to arrive nor exchanging information with the other driver.

Michelle Widdows, of Monroe, said her son, Shalom, jerked forward from the impact, causing injuries. He was taken to Monroe Urgent Care for neck and back pain.

“Special needs parents are literally at the mercy of the people taking care of their children and you assume they are doing the right things,” Widdows said. “Then they get into a hit-and-run accident.”

Widdows lays all of the blame at the feet of the driver. She said she is happy with how Kiddie Kabz handled the situation. On Friday, Tonya Chapman, CEO of Kiddie Kabz, a Hamden transportation company, told The Sun the driver, Tamango Wayne Housley, is no longer employed there.

“It brings awareness that you can’t get away with these things,” Widdows said of speaking out. “It’s not okay. Kiddie Kabz was great. They were very receptive. They offered to pay Shalom’s medical bills, but I was very disappointed with the driver.”

The accident occurred in Trumbull. Police determined that Housley, 50, of 37 Bradley Ave. in Hamden, was at fault. According to the police report, the investigation found Housley was following too closely, left the scene of the accident, evaded responsibility, and was distracted prior to the accident by use of his hand-held mobile phone.

The accident occurred on Monroe Turnpike, near the intersection with Trefoil Drive in Trumbull.

At approximately 2:53 p.m. on May 27, a 26-year-old Milford woman who was heading north in her black 2015 Honda CRV, stopped in traffic, when police say Housley, who was driving behind her, struck her vehicle from behind in his gray Toyota Corolla.

Police said the Honda’s rear bumper was pushed in and it had undercarriage damage from the impact and the Toyota had front end damage.

The woman told police she had a brief conversation with Housley and when she went back to her Honda to retrieve her identification and vehicle information and call the police, she said Housley drove off without making any attempt to exchange information with her, according to the report.

Housley later told police there was no damage to either vehicle, the other driver told him she was not injured, and that she said he could leave, the report said.

Video from a Ring camera at Widdows’ home shows Housley arrive in the Toyota Corolla and Shalom get out of the car, wincing in pain as he walks to the house. Then Housley gets out of the car and appears to try to fix the front bumper.

Widdows said Shalom told her wife, Karen, he was in a car accident. In the video, Karen is seen confronting Housley. She later said the bumper appeared to be crooked and falling off.

Michelle Widdows said she went to the Monroe and Trumbull police departments to report that her son was involved in an accident. She said Trumbull officers told her they were expecting her, because they believed someone was hurt, due to the damage to the Honda.

Shalom gave police a statement, telling officers Housley was watching video on his cellphone just before hitting the Honda from behind.

Since the accident, Widdows said her son goes to physical therapy and feels intermittent pain. Unlike her son, she said some special needs children do not have the ability to communicate verbally when something happens.

“I want people to do better for special needs kids,” Widdows said. “This is unacceptable behavior.”

Chapman, who has been in the transportation business for 16 years, said she cares about the safety of the children and is upset over the accident and how her former driver handled it. She said she used the incident as a teachable moment for her other drivers.

“The mom, she’s excellent,” Chapman said of Widdows. “She wants us to drive her son. Most of our drivers are really good with the kids. I try to find people who are compatible. Kids who are autistic deserve kindness and fairness as well. I look for somebody that is nurturing.”

Chapman said her motto is to treat the children who use the service like they are her own.

Monroe Superintendent of Schools Joseph Kobza is aware of the May 27 incident.

“Student safety is always our primary responsibility and we treat all incidents with the utmost attention,” Kobza said Friday.