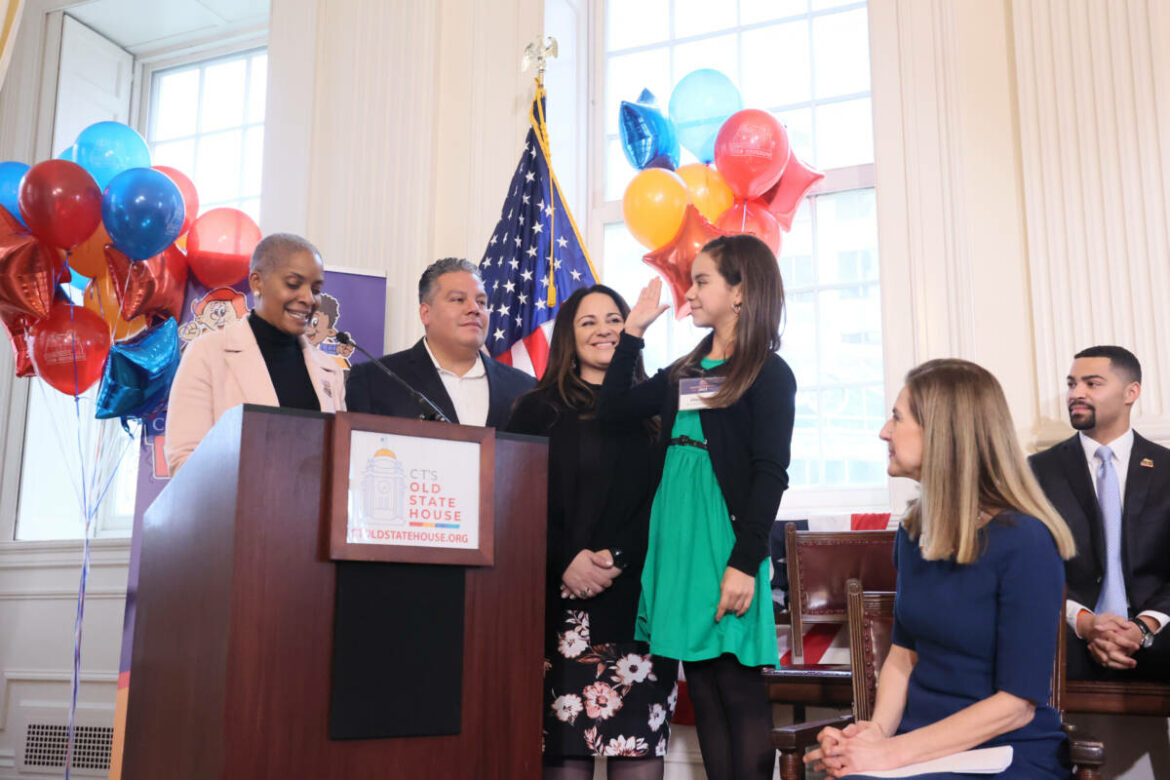 Ellie Mendez, 10, of Monroe, takes the oath of office as Connecticut's Kid Governor from Secretary of the State Stephanie Thomas, left, as her proud parents, Angelo and Stacey Mendez, look on during a ceremony at the Old State House in Hartford Friday.

MONROE, CT — Elisavet “Ellie” Mendez, a Monroe Elementary School fifth grader, was sworn in as Connecticut’s eighth Kid Governor at the Old State House in Hartford on Friday morning. Then First Selectman Ken Kellogg read a proclamation in her honor during Monday night’s Monroe Town Council meeting. It’s been a whirlwind tour for the 10-year-old.

“This experience has already been truly uplifting and amazing,” Ellie said during her inaugural address. “I’m beyond excited to start my term and work with my cabinet members.”

A majority of the more than 9,400 fifth graders voting across Connecticut chose Ellie from among seven finalists for her campaign against anxiety and depression. The other six finalists now make up her cabinet and they will work together during her one-year-term.

Ellie is the first Kid Governor elected from the town of Monroe. 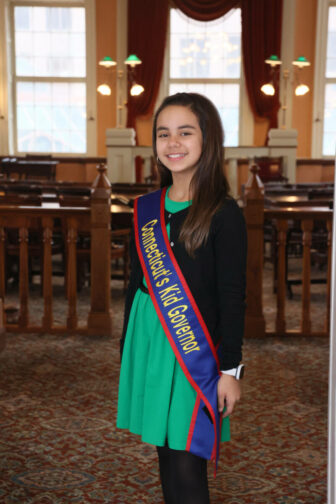 “Our seven kid governors and their cabinets have used what they’ve learned to help students and adults understand the value of being informed and working together to build a better world,” Whipple said at the ceremony.

During their term, Whipple said Ellie and her cabinet will participate in virtual meetings with kid governors from the states of Oregon, New Hampshire, Georgia and Oklahoma.

Lt. Governor Susan Bysiewicz, who was among the featured speakers, noted how Connecticut has only had two female governors in 247 years, Ella Grasso and Jodi Rell. By contrast, seven of Connecticut’s eight kid governors were girls.

“I bring that up because I believe that the Connecticut Kid Governor program is showing how young people can lead the way,” she said. “Because I have a feeling with all of these young leaders in the pipeline, we are gonna have many more female leaders in the state of Connecticut.”

Eric Russell, who is starting his first term as state treasurer, also took a turn at the podium.

“Ellie, Governor Lamont keeps telling me that I’m the kid treasurer, so I think we should join forces and make sure we get some good work done over the next year,” he said.

Charlene Russell-Tucker, Connecticut’s commissioner of education, told Ellie to be sure to continue her gymnastics and doing her backflips because, “being physically healthy and having fun still matters to be your true self.”

State Supreme Court Justice Stephen Ecker spoke of the importance of working together and respecting others’ views, even when you disagree. 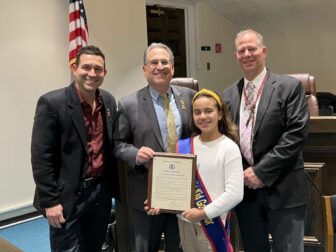 State Sen. Marilyn Moore, D-22nd, and State Rep. Tony Scott, R-112th, whose districts both represent Monroe, walked up to the podium together and took turns offering words of encouragement to Ellie.

Moore said she hopes Ellie reaches back to her predecessor, Makhi Ettienne-Modeste, for advice as she has always done in life.

“This is where it begins,” Moore said. “It begins with understanding your role as an individual, your civic duty to vote and to follow through.”

Her advice to fifth graders is to keep journals, write down their wishes and see how many they go on to achieve.

“Years from now, reflect back,” Moore said. “I still have my book from when I was in the eighth grade that I go back to and see what people said about me. People saw things in me that I didn’t see in myself.”

“I congratulate Ellie and look forward to her representing Monroe as much as I do,” Scott said. “My daughter, Addison, was on the cabinet for Kid Governor three years ago. I wouldn’t be here today, as a state representative, if it wasn’t for the Kid Governor’s Office. Because Addison ran for the position, it gave me the inspiration that I could do more to help my town, my district, and the state of Connecticut.”

“I wish we could fast froward 20 or 30 years from now to see the great things these fifth graders will do in the future,” he said. “I’m sure it will be amazing.”

On Monday, after Monroe First Selectman Ken Kellogg delivered a proclamation in Ellie’s honor, declaring it Kid Governor Ellie Mendez Day in town of Monroe, Scott presented her with a town of Monroe lapel pin.

This continued a tradition started by former State Rep. J.P. Sredzinski, who gave pins to those elected for the very first time. 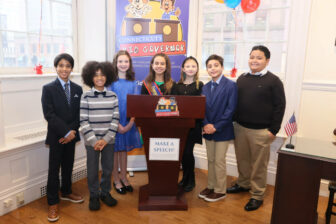 Then Secretary of the State Stephanie Thomas delivered the oath of office to Ellie and her cabinet members: Aaron Enyong of West Hartford, Jacob Garay of Hartford, Liliana Magazine of Milford, Maxence Celmentine of Middlebury, Scarlet Beaulieu of Andover, and Shaan Patel of Southbury.

“I am happy to announce Connecticut’s 2023 Kid Governor Ellie Mendez,” Thomas said, before putting a blue and red sash on the girl. “This sash is a symbol of your office and your role, which you should wear proudly when you address your constituents, make public appearances or participate in programs.”

During her inaugural address, Ellie thanked the Connecticut Democracy Center and all of the fifth graders who voted for her. She also recognized her cabinet members.

“My goal is that, together, we will make a huge impact, not only in our communities, but on the entire state of Connecticut,” Ellie said. “I appreciate this opportunity to help kids in Connecticut and I couldn’t have done it without the support of many people.”

She thanked her parents, Stacey and Angelo Mendez, and her little brother, Angelo, for their motivation, inspiration and support.

Ellie also thanked the Monroe Elementary School community, Superintendent Joseph Kobza, the Monroe Board of Education and First Selectman Ken Kellogg for their support, as well as her principal, Kelly Swensen, and her teacher Joelle Palmieri.

Special recognition was given to Brian Cofrancesco, head of the Kid Governor program, and Nichole Pitruzzello, state coordinator for the program.

Ellie also thanked the state dignitaries “who inspire us to help our own communities.” 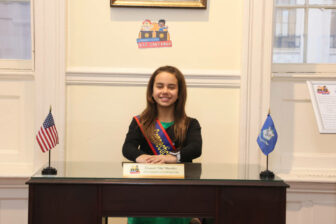 “Anxiety and depression among kids is a very serious issue,” Ellie said. “This year, I will focus on my Express and Address Your Feelings platform and work to make a difference.”

The platform includes strategies to help fifth graders communicate their feelings to adults, teachers and professionals. Among those strategies is Ellie’s Turn My Frown Upside Down Mailbox.

She will create a video sharing communication strategies and providing instructions for creating the mailbox for classrooms.

The second part of her platform is to provide a live virtual education program to educate fifth graders on signs of anxiety and depression and strategies to cope with those feelings.

“One strategy I will share is my Tap Out Light Station, which is a way for kids to reset when they are having a moment in class,” Ellie said. “I am piloting this idea at my school and I am very excited to see it come to life.”

Ellie also plans to create a digital mental health hub with uplifting messages and interactive resources to inspire kids, and to host a statewide poster contest for fifth graders.

“It is clear that anxiety and depression are real issues, but by working together on my Express and Address Your Feelings platform we can make a difference,” Ellie said.

“I want you to remember today, tomorrow and long after that, that you’re stronger than you think you are,” she said, as a smile spread across her face.

A standing ovation was given to Connecticut’s new Kid Governor.