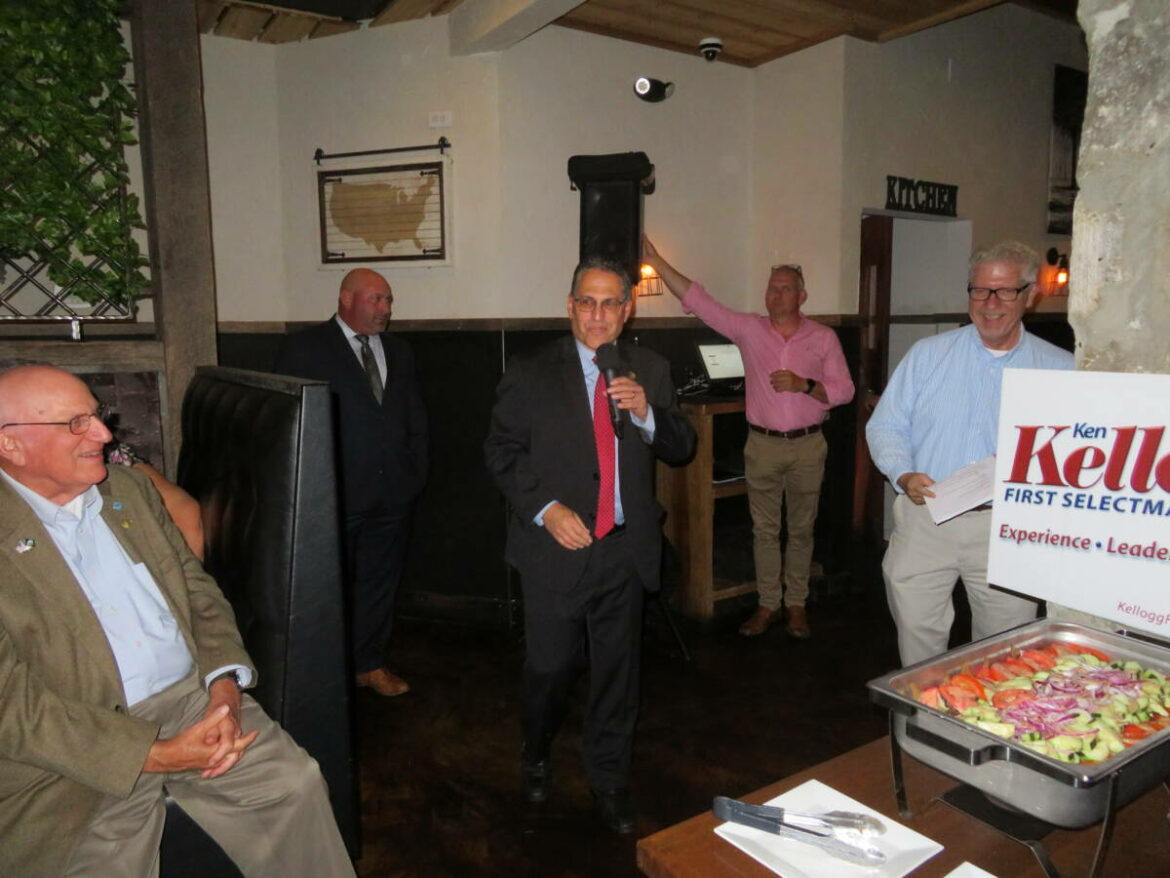 First Selectman Ken Kellogg takes his turn with the microphone during a campaign fundraiser at Republic Kitchen on Main Street Tuesday evening.

Kellogg touted the growth of the town’s business sector over the past two years, despite his administration having to devote most of his term guiding the town through the COVID-19 pandemic.

“Seventy-nine percent of my current term has been during a pandemic and a state of emergency,” he told guests at the event, who were seated around tables in the bar area of the restaurant. “I went back to what I and my team promised Monroe: Leadership, experience and results.”

So far Kellogg, an incumbent Republican, is running unopposed while seeking his third consecutive term.

“Ken’s leadership of our town has been simply outstanding,” O’Rourke said. “Ken, I can speak for myself, but I’m certain everyone else in this room shares the same sentiment: We are lucky to have you at the helm, guiding Monroe now and in the future.” 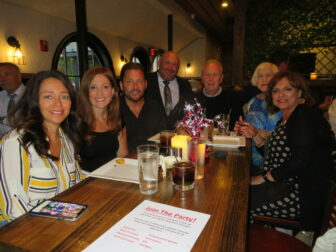 “Remember, our neighbors have our backs,” he said. “They prove it every election cycle with their overwhelming support they give us. Let the support and confidence well up inside of you to help us give the voice we need to keep the public record accurate on how our town is managed.”

O’Rourke then led the room into a chant of “two more years.”

The first selectman said he is proud of his team, including staffers at Monroe Town Hall, department heads, employees, volunteers and elected officials for their work to get the town through the pandemic.

“We have given the town leadership at a time of crisis,” Kellogg said. “I can’t tell you how many grocery bags were delivered. It was about keeping our library open and providing a library-to-go service.”

He spoke of how town government continued to function with drop boxes, remote services and online meetings. Monroe also kept its parks open when many other communities could not, and had a swimming season at Wolfe Park’s pool. 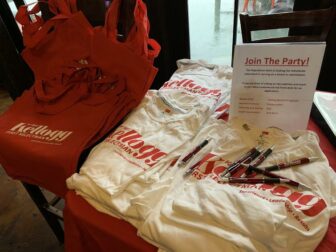 Campaign swag for First Selectman Ken Kellogg’s reelection was available at the door during a fundraising dinner at Republic Kitchen Tuesday.

“Over 1,000 COVID tests and thousands of vaccinations were delivered by the Monroe Health Department with an army of volunteers supporting them,” Kellogg said.

The first selectman also reminded his audience of his weekly updates on the pandemic. “It was a rapidly changing emergency and it was important to keep our families informed,” Kellogg said.

Kellogg spoke of his background in emergency planning and response “to remind you experience counts and it matters.”

Though the past year was challenging, he said the town has had an average tax increase of less-than-half-a-percent over the last four years.

“We are going to continue to commit to everything we can to keep taxes under control,” he said. ”

The first selectman said changes have been underway to make it easier to do business in Monroe. For example, he said a project to offer online permitting will be ready to go live with a beta test next month.

As a result, Kellogg said Vazzy’s Osteria will be the first restaurant to take advantage of changes in requirements for permanent outdoor dining, with “no expensive plans required” and “no public hearing before the commission.” Instead, the plan was approved by land use staff.

“We have really stripped a lot of the needless things out of our regulations,” Kellogg said.

For example, Kellogg said the town removed “unnecessary reviews” by different departments such as wetlands, zoning and the health department for “simple things” like a propane tank, rooftop solar panels, doors and windows.

“Those were all going through these ridiculous procedures,” he said. “We got rid of all that. We’re relaxing regulations on overly engineered and costly landscaping and lighting requirements.”

To support economic growth, Kellogg said there is a good relationship with the EDC and Monroe Chamber of Commerce, and a fully funded community and economic recovery coordinator is in the budget.

“And we’re in the process of replacing our former planning and zoning administrator,” Kellogg said, as the room erupted into cheers.

Other accomplishments were moving the Monroe Volunteer Emergency Medical Service’s building project, which had been stalled for years, to a Town Meeting vote for final approval, the Planning and Zoning Commission’s update of Monroe’s new Plan of Conservation and Development, and getting the project to rebuild Pepper Street going after years of delays by the state, according to Kellogg.

Kellogg read a laundry list of businesses that expanded operations and, in some cases their buildings, during the pandemic, including Northeast Laser, Sippin Energy, Monroe Social and Jennie’s Pizzeria to name a few.

“We have new developments going on,” he said, “Gateway Commons at the Trumbull line for mixed use development. Connecticut Housing Partners is developing senior affordable housing right here on Main Street.”

“And we’re not stopping there,” he said. “We’re working to make our commercial tax abatement process better. We’re working to continue government, improve our service, make it more efficient. We want to finish a lot of the projects that were slowed down during the pandemic — things like our fields project, new fields at Wolfe Park, the strategic plan for our municipal facilities. The point is, there is still a lot more to accomplish.” 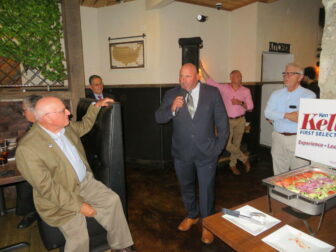 Kellogg thanked members of his campaign team, including treasurer Jonathan Formichella and deputy treasurer Dona-Lyn Wales, both of whom are Town Council members. Michael O’Reilly, who serves as chairman of the Planning and Zoning Commission in town, assisted with advertising, according to Kellogg.

Patrick O’Hara, who is the town treasurer, and the Condon family (Dennis, Veronica and Ryan) were all instrumental in the campaign, according to Kellogg.

The first selectman gave special thanks to Terry Rooney, who organized the fundraising dinner. “Terry is an outstanding volunteer in our community as a town council member,” Kellogg said. “He has done tremendous things for our community and our party.”

Rooney said he was pleased with the turnout at the event, saying it was especially great to see so many business owners. He also praised Kellogg’s record of keeping tax increases low by cutting wasteful spending.

“There are a lot of things he’s done to make a positive impact on the community,” Rooney said. “He’s the best selectman we had in Monroe in a long time.”