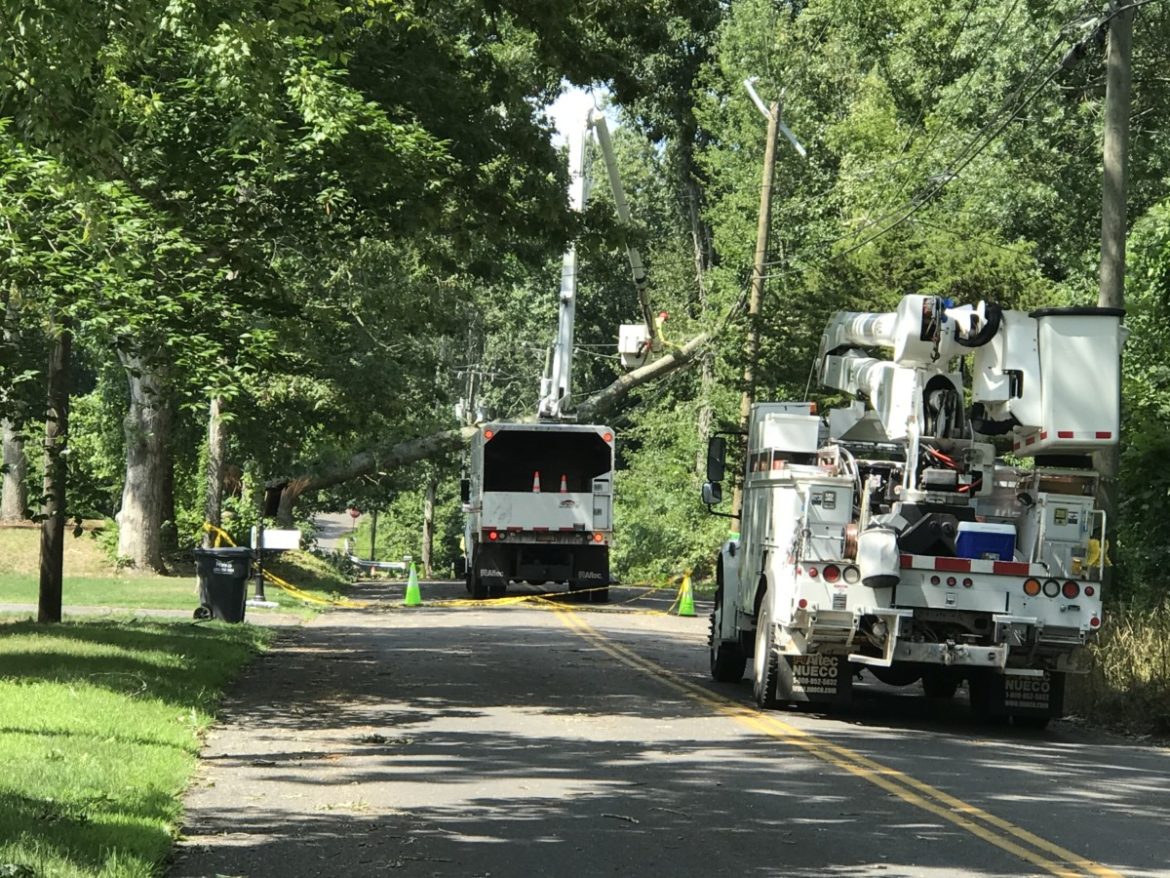 Nearly 700,000 power outages have been reported statewide and Kellogg said the damage in some areas is comparable to Super Storm Sandy. Eversource has not given an estimated time for restoring power, but Kellogg anticipates Monroe’s power will not be fully restored until later in the week.

In an update the first selectman issued this morning, he reported over 100 blocked roads, 35 of which cannot be safely cleared by public works until Eversource removes power lines.

“We understand the frustration of not being able to move around town as easily and not having power, but we’re going to move as fast as Eversource can,” Kellogg said. “I appreciate people’s patience. We’re going to have to anticipate this will be a multiple day event.”

“The impact from this storm, in terms of power outages, is greater than Superstorm Sandy. The fierce winds with this storm caused widespread power outages and historic damage, affecting customers in all of the 149 communities we serve in Connecticut,” said Michael Hayhurst, Eversource’s vice president of electric operations in Connecticut.

“We are taking to the skies to conduct a detailed damage assessment of our 17,000 miles of overhead equipment and using patrollers on the ground, so we can efficiently deploy our resources to get power restored for all of our customers,” he continued. “We recognize how difficult it is to be without electricity, especially while many people continue working from home during the pandemic. Our crews will continue working until every customer has power back while also complying with stringent pandemic protocols.”

Kellogg said most of Monroe Turnpike (Route 111) has power, but power is out at the intersection of Route 111 and Purdy Hill Road. Police Capt. Keith White, who is also Monroe’s emergency management director, said most traffic lights along Main Street (Route 25) are out.

“It was so backed up at routes 59 and 25 this morning that we had to manually direct traffic for a while to get cars moving again,” White said.

When traffic signals are out, drivers should go by the same rules as intersections with four-way stop signs.

Kellogg said, “right now, we’re completely dependent on Eversource to open up roadways, which is the first priority, so I don’t anticipate a tremendous amount of power restoration today. We have major state roads that are not completely passable and that has to be a priority.”

He said roads are the main focus, primarily so emergency vehicles can get through and so routes to hospitals are open. Another issue, according to Kellogg, is truck traffic on state roads could try to use back roads when the main thoroughfares are blocked.

White said he spoke to Eversource early Wednesday morning and was told subcontractors have been hired to help clear roads. At 10:52 a.m., Kellogg said two crews just arrived and two more were on the way.

Kellogg said businesses along Route 111 are open, including Big Y and Stop & Shop supermarkets. However, he asks residents to avoid driving if they can.

Because of COVID-19 restrictions on large gatherings, White said no emergency shelters have been opened. This is why White said a charging station for cellphones and electronic devices was set up at the gazebo in front of Monroe Town Hall, an area that is open air.

Kellogg said no requests have been made for shelter, but the town will try to find accommodations if that changes.

Potable water is available at the Senior Center, Monroe Police Department (in the vehicle bay area near the library), and at the fire stations on upper Main Street, Monroe Turnpike, and Jockey Hollow Road.

Eversource had issues when customers tried to call to report outages, or do so on its website, Tuesday but, according to a company spokesman, those issues have since been resolved.

Kellogg encourages those who lost power to try to get through and report it today.

In his update, he included important phone numbers: