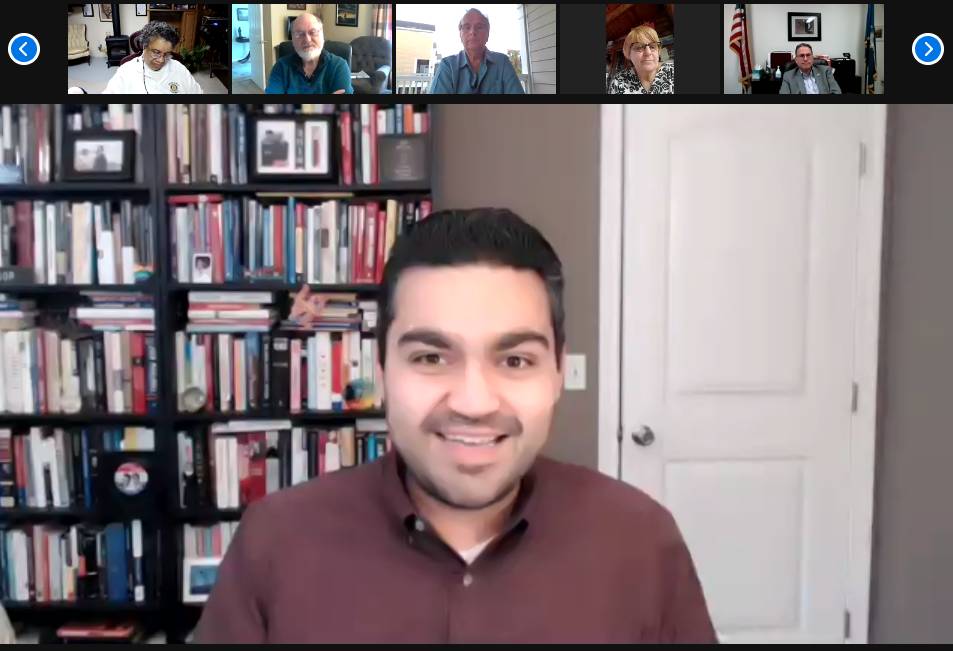 He shared the six planks of his campaign platform: education, the budget and taxes, the environment, transportation and infrastructure, civil rights and post COVID-19, before taking questions in the timed format.

“Any student should have a free and adequate education, no matter what zip code they live in and education should be under local control as much as possible,” said Kapoor, who serves on the Monroe Board of Education.

On the budget and taxes, he said taxes “need to be as low and as fair as possible at all times.”

Gov. Ned Lamont, a Democrat, has a budget proposal that would draw from the rainy day fund, which is at its highest ever, according to Kapoor, who said the budget proposal also includes coronavirus funds from the federal government and taxes from legalized marijuana, online gaming and sports betting.

“It has to go through the legislature first,” Kapoor said. “We need to make sure that we don’t raise taxes. The budget proposal includes a 17 cent raise on the gas tax. That’s a no go. We have one of the highest gas taxes in the country as it is. We can’t afford another 17 cents on top of that.”

Kapoor, who has served on the Connecticut Commission on Human Rights and Opportunities since 2017, said all people should be free of discrimination.

While talking to residents in the district, which covers Monroe and portions of Newtown, Kapoor said he has heard complaints about congestion on Route 25 and the number of curb cuts on Route 111.

He said the state must make a commitment to funding road and infrastructure projects. Instead, over the past few years, he said Democrats in Hartford have said there is not enough money in the transportation lock box.

“That’s because it was diverted to other things,” Kapoor said. “We can’t continue to play this shell game. Your budget, I believe, is your biggest policy document. We need to commit to funding transportation.”

Kapoor went on to talk about how the pandemic has caused damage to Connecticut’s economy and society, and of the need for post COVID planning.

The governor wants municipalities to share in the burden for the teachers’ pensions. Guere said he believes Monroe’s portion is in excess of $110 million, adding there is no way a town can absorb that hit.

He asked Kapoor what he would do to solve the problem.

“Not only are we underfunded now, but actuary tables will tell you that in five to six years there are these huge balloon payments that are coming,” Kapoor said.

Over the past few decades, he said Democrats and Republicans have been borrowing money to fund the state’s pension obligations.

“I call this generational theft,” Kapoor said. “We are stealing money from generations beyond us and that’s what happened to us 30 and 40 years ago. I don’t want that to happen.”

He would propose short-term borrowing to normalize payments over the next 10 to 15 years. “I know we don’t want to put anything else on the state’s credit card, but we are not going to be able to afford a balloon payment in 2025 or 2026 or 2032,” Kapoor said.

“Short term borrowing for normalized payments in a very concentrated fashion would help us in the short term, and then we have to get all the numbers on the table and make a plan for the next 15, 20 years,” he said.

Wayne Chmura, a Rotary Club member who is a Realtor, asked Kapoor what his position is on the “mansion tax” Senate President Pro Tem Martin Looney is proposing on all homes worth more than $430,000, which Looney estimates could “raise $73 million per year as part of a package to provide property tax relief for cash-strapped communities like his hometown of New Haven,” according to an article in the Hartford Courant on Jan. 26.

“The mansion tax is a bad bill,” Kapoor said, “probably the easiest no vote I would have to take.”

Kapoor was also asked about the state’s push for municipalities to provide more affordable housing.

He noted there are many proposals to increase affordable housing, from the 8-30g statute to Senate Bill 1024. Kapoor said different provisions can be confusing and there are no chances for communities to opt in or opt out.

“If we had guidelines we could give to the municipalities, that don’t have the force of law, for planning and zoning commissions to look at, I think it would be better for them to read it and make decisions at the local level,” he said.

Kapoor said provisions that do not have the force of law behind them can offer ways to come up with good ideas on addressing issues.