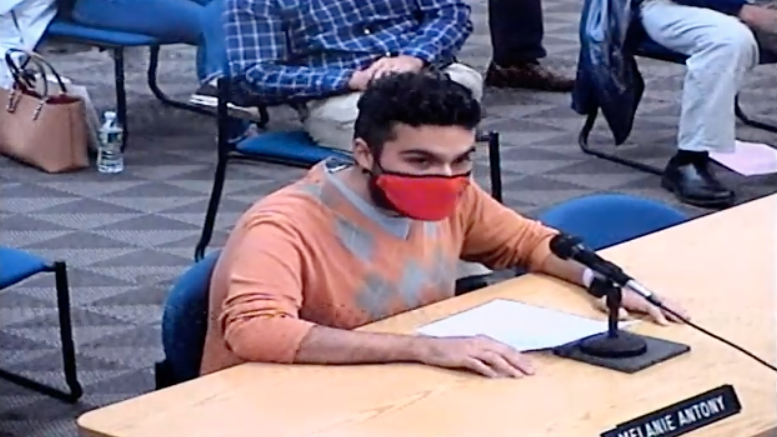 Nick Kapoor, a Board of Education member, defends his proposal for a transgender and gender non-conforming youth policy for Monroe public schools during the board's Oct. 4 meeting.

MONROE, CT — After weeks of hearing supportive comments and criticism over his proposal for a transgender and gender non-conforming youth policy for Monroe public schools, Board of Education member Nick Kapoor gave a prepared speech at last week’s meeting.

He responded directly to complaints that the policy was divisive.

“One hundred years ago, women obtaining the right to vote was divisive,” Kapoor said. “Seventy years ago, in parts of our country black children and white children sitting in the same classroom was divisive. Forty years ago, even acknowledging LGBTQ+ people existed was divisive. Six years ago, legalizing same-sex marriage was divisive and one year ago a divided Supreme Court said for the first time, ‘you can’t be fired just for being LGBTQ+.'”

“And so, responding to public comments and comments from board members recently, you can call me dangerous, divisive, liberal, disruptive, or whatever name you want to call me — that won’t stop me from proposing and speaking about what I think is good public policy for Monroe public schools,” he continued.

For details on the proposal, click here. It was the topic of discussion, once again, for some participating in the public comment portion of the Board of Education’s meeting on Oct. 4. 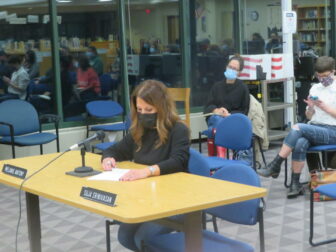 Michelle Orr, a parent, speaks during the Board of Education meeting at Masuk on Oct. 4.

Michelle Orr, a parent, said opposition to the policy does not represent a condemnation of transgender children. “Opposition to ideology that doesn’t serve all of our children is what’s been expressed by those parents willing to stand up for their children,” Orr said.

She said her reason for opposing it is to protect women’s rights under Title IX, including fairness in sports. A biological male identifying as a female could take away opportunities for biologically female athletes, according to Orr.

“They have a right to thrive and advance in their sport,” she said of female athletes.

She also expressed her belief that, until there is a physical transition, transgender students should use the bathroom that conforms with their current anatomy or use a private bathroom.

“The real concern with bathroom choice is the only requirement for a male to enter a woman’s restroom is affirmation that they identify as female,” Orr said. “This absolutely gives male predators free access to a woman in a vulnerable setting, in which they shouldn’t be placed in harm’s way.”

Orr said the district already has an inclusive bullying policy, which includes gender identity and a reporting system for bullying. Statistics from the district show one incident of bullying involving sexual orientation and gender identity in 2017-18 and one in 2018-19, so she said it is either under-reported or not occurring very often.

She said Monroe schools need to provide a safe, nurturing environment for all of its students in an environment free of discrimination and bullying. 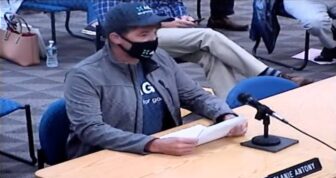 Janos Pergely, a Masuk alum, speaks at the Board of Education meeting on Oct. 4.

Janos Pergely, an alum of Masuk’s Class of 2007, who is openly gay, said, “I think that we do need a trans policy to protect the trans youth in our schools, I truly do. But I think this policy is very vague and there has been contradictions.”

Pergely said sex is not defined in the policy and it says nothing about gender dysphoria, a term that describes a sense of unease that a person may have because of a mismatch between their biological sex and their gender identity.

He also agreed that transgender athletes put female athletes at a competitive disadvantage.

“We know that is a reality,” Pergely said. “The fastest female on this planet, who died in 1998, ran the 100 meter in 10.49 seconds. There are several high school boys who can beat that, so we know there is an advantage in athleticism.”

Pergely also noted the privacy portion of the policy, in which a child’s transgender identity could be kept from parents on a case-by-case basis.

“Parents need to be involved,” he said. “This needs to be reworded in the policy.”

Pergely also said the policy should be age appropriate. He said he has friends who are teachers and, from their social media posts, he knows gender identity and pronouns are already being pushed in public schools.

“I have a friend, who teaches in Trumbull Elementary School, who recently posted that they spoke to children about pronouns and gender identity,” Pergely said. “They don’t need to be learning about this right now. They will be learning about it, but not at that age. It’s far too young.” 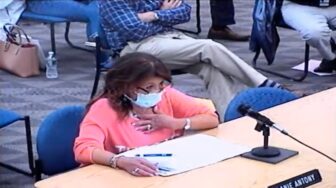 Lisa Marie Pinto, a parent, speaks during the Board of Education meeting at Masuk on Oct. 4.

Lisa Marie Pinto, a parent, spoke in opposition of the policy.

“I fully support the LGBT community,” she said. “I have many family members who are gay, lesbian, bisexual. I have friends who have trans kids. I fully support it. I give moms hugs at parades.”

But Pinto said she is concerned over what a new policy could do to the children, especially at the elementary school level.

“The school’s gonna be telling the kids one thing. The parents are telling them another,” she said. “The minute you have doubt with a child, if a parent is right or wrong, you’re putting that kid in danger. If my kid questions me, then won’t he question taking candy from a stranger? Doing drugs? Getting in a car after drinking?”

“I think planting these seeds in kids’ heads is wrong,” she said. “It’s not fair. Their minds aren’t able to even grasp this stuff. To ask a kid, ‘what gender are you?’ Why would you even hand them anxiety that way?”

Pinto used statistics to illustrate the scope of other problems children face, including a 40 percent increase in suicidal thoughts among children who are sexually abused, 21 percent raised without fathers and 10.5 percent with alcoholic parents.

“Less than one percent have transgender and gender dysphoria,” Pinto said. “We’re making a policy for less than one percent of the children when we have these other issues? A lot of kids have issues. Saying that one group is more special than the other is not benefitting any of the kids, especially the ones you’re trying to protect.” 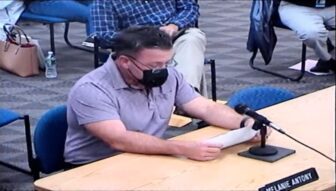 David Orr, a parent, speaks during the Board of Education meeting at Masuk on Oct. 4.

David Orr, another parent, spoke of how Title IX has had numerous changes over the years and there are pending lawsuits on both sides.

“Considering the volatility of the issue at hand and the constantly changing interpretations and guidance on Title IX, the most responsible course of action for this Board of Ed to take is not to adopt the proposed policy, but to maintain the current existing policy, which prohibits bullying, and to ensure that existing policies align with State and federal law, including current Title IX interpretations and guidance,” he said.

“I would also encourage this Board of Ed to issue a collective statement or resolution to take a stance against transphobia and hate and to encourage understanding, inclusion and respectful viewpoints on these matters,” Orr said.

‘Get in good trouble’ 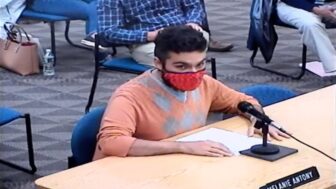 Nick Kapoor, a board member, speaks during the Board of Education meeting at Masuk on Oct. 4.

“The policies of the school system should reflect what the community looks like,” he said. “Two years ago, approximately 15 percent of Masuk students identified as something other than heterosexual. That may make you uncomfortable, but that’s the reality. Whether you like it or not, agree with it or not, acknowledge it or not, our society has changed on this issue.”

Kapoor said 10 to 15 years from now “it will be laughable that we are even having this conversation,” adding “these kids are here now and this policy supports them.”

“I wholeheartedly reject and refute that this policy puts any student in danger — it does the opposite,” Kapoor said.

He noted the board has policies for other protected classes that are covered by State statute, including for racial and ethnic bullying and harassment and religious accommodations. He asked why the board is not proposing to eliminate those policies.

“No one has answered that. And that’s because we need definition and context for all of these protected classes — that’s why we have these policies and need this one,” Kapoor said. “It is simply the responsible thing to do.”

Since discussions over his proposal began, Kapoor said 13 parents reached out to him, seven who told him their children are not out to anyone but them.

“These children are at all levels of our school system,” Kapoor said. “The anxiety that students feel in being who they are is real. Is a policy going to fix everything? No, but it’s a start.”

“I emailed each board member on August 9 and asked you to contact me if you’d like to talk about this policy,” he continued. “Alan and Jerry did, but two months later I still have yet to hear from anyone else. We can’t have a conversation about this if you won’t talk to me.”

“The late civil rights icon Congressman John Lewis said,  ‘Never, ever be afraid to make some noise and get in good trouble, necessary trouble,'” Kapoor said. “Those are words that will continue to inspire me, because sometimes a little bit of good trouble is what we need to make change for the better and bring our policies in line with the 21st century.”