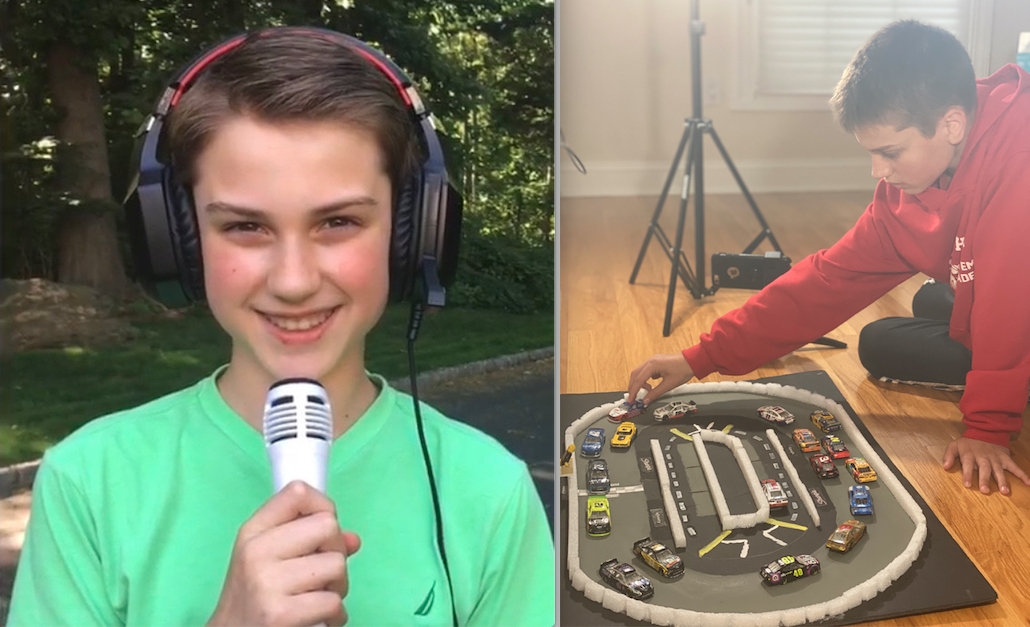 A "Passion Project" by Jockey Hollow student Austin Jackson, 12, caught the attention of NASCAR TV personalities when he posted his stop-motion race on YouTube. Contributed

MONROE, CT — When 12-year-old Austin Jackson submitted his end-of-year “Passion Project,” he saw it as a chance to demonstrate his long-time love of NASCAR to his sixth-grade class through a ​four-minute stop-motion race​ complete with second-by-second analysis, driver interviews and impersonations of FOX pit reporters Vince Welch and Matt Yocum. Austin had no idea this work would gain the attention of his idols in NASCAR broadcasting.

Soon after his video uploaded to YouTube and spread on social media, Austin got a FaceTime call. He opened the call, and there, on the screen, was Matt Yocum.

“I was surprised to find out that I was FaceTimeing one of the biggest pit reporters in NASCAR,” Austin said.

For over 30 minutes, Yocum and Austin spoke about racing, broadcasting, Austin’s die-cast car collection, and his future career plans in NASCAR. Yocum invited Austin to shadow him at a race next season as Yocum’s “mini-me.” Austin will receive press credentials, see the broadcast trailers, and meet NASCAR commentators in the booth.

“Matt had mentioned to Austin, ‘My job is to be a storyteller, and you’ve got to get really good at telling stories—’”

“‘—And tell those stories to the world,’” Austin chimed in. “Or the NASCAR community,” he added. 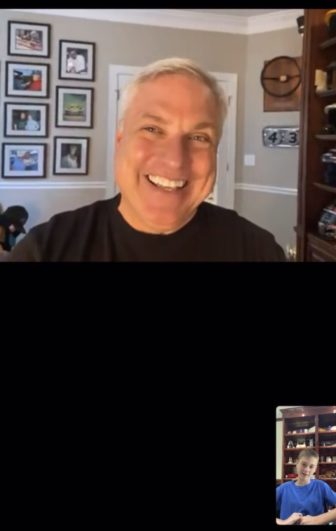 Sportscaster Matt Yocum has a FaceTime call with Austin Jackson, 12, of Monroe. Contributed

Yocum first contacted Shannon through Twitter, saying he saw Austin’s video and wanted to surprise him with a FaceTime call. Shannon said she had a tough time keeping the secret from Austin.

“I remember telling my husband, ‘Honey, look at this message that I just got on Twitter,’” Shannon said. “I was shocked. It wasn’t put out on any social media platform expecting any response from anyone. It was really just put out there to share with friends and family.”

Vince Welch also sent Austin a video message, wishing him luck and thanking Austin for including him in the stop-motion race.

“It was terrific. You had great production value,” Welch said to Austin. “I look forward to hopefully getting to meet you someday at the race track, and I’m pretty confident I’m going to see you on TV as well.”

Austin said he was surprised and excited to see Welch’s message. Welch emailed Shannon the video, and she hooked her laptop up to the TV to watch.

“It was very nice of him to send that video. I had family there too when we got it, so we all watched it together,” Austin said.

“They’re super busy. So, the fact that they would take the time out of their schedules to make a comment, and take the time to watch a video of somebody who has dreams and aspirations of doing what they do, I think that’s really part of the NASCAR family,” Shannon said. “They really do look out for these young kids and these up-and-comers.”

Austin said that at first, he wanted to become a NASCAR driver, or as he jokingly says, “Drive in circles for a living.” But, this school project opened him up to opportunities in broadcasting.

“I’m excited to continue the commentating; I really want to do that. But, if that flops, then driving is my plan B. And then plan C would probably be a police officer,” Austin said. “Anything that has a car, I’ll do it.”

After seeing the positive comments on his video, Austin said he felt encouraged to create more NASCAR stop-motions. He made a ​YouTube channel​ and ​Twitter account​ under the name Racing Kid Commentator to share his videos. 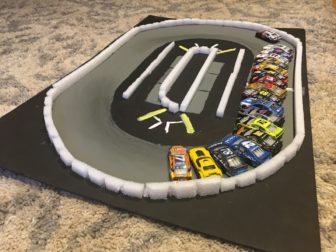 Austin plans on making 10 more stop-motions for an 11-race series. Austin said when he starts a stop-motion race, he does not decide a winner before-hand.

For his videos, Austin re-creates race-tracks with as much detail as possible. So far he constructed New Hampshire Motor Speedway, Bristol Motor Speedway and Martinsville Speedway.

Austin said he works from his iPhone but hopes to eventually move to a real camera and professional editing software. He said designing, photographing, recording and editing one video can take up to a week.

“I push the cars around the track to make it look like a real race. Every time I move one car, I take a picture. And I usually end up taking up to a little over 1000 pictures,” Austin said. “It can get really boring. Because you’re just pushing them half an inch, and take a picture. Push them again, take a picture.”

To stay focused during the picture taking process, Austin says he watches football, baseball, hockey, and of course, NASCAR, while he works. Occasionally, Austin says he sometimes has to miss a race due to schoolwork or activities with friends and family, but, most weeks you can find him catching the latest NASCAR event on his couch and rooting for his favorite driver, Kevin Harvick.

Shannon describes herself as “One proud mama” and is so thankful for Austin’s teachers at Jockey Hollow that created the “Passion Project.”

“This project for Austin has really opened his eyes and has taken him on a different path in NASCAR and what he wants to do when he gets older,” Shannon said. “It was neat to see what all of the other students chose to do. […] Even though these students weren’t necessarily with each other in a classroom, they still got a chance to get to know each other through this project.”

Austin said he wants to grow his commentating skills and increase his presence in the NASCAR stop-motion community on YouTube.