MONROE, CT — Jennie’s Pizzeria invites everyone to the grand opening of its new dining room. The restaurant at 380 Monroe Turnpike is offering savings, giveaways and a free champagne toast from 3 p.m. until closing on Aug. 17, 18 and 19.

The new space, which is one-and-a-half times the size of the old dining room, seats 75 patrons. The open area has a hardwood floor and the walls are black and gray.

The back of the room has “Est. 1935” painted in white. Jennie’s, which first opened in Bridgeport, is the oldest pizza restaurant in Fairfield County and the 17th oldest in the United States. 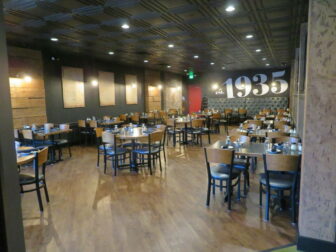 Jennie’s proudly displays the year it first opened, 1935, on the back wall of its new dining room.

“This was empty,” said Al DeSimone III, who owns the family restaurant with his brother Richard. “We’ve had this place for a long time. We just never pursued it until it was necessary. It used to be a storage space.”

A growing demand for private parties among Jennie’s customers drove the brothers’ decision to expand. In addition to the new dining area, the older space is being transformed into a party room that will open soon.

“We must have been refusing 10 to 12 parties a month, from funerals, lunches and anniversaries to birthdays,” DeSimone recalled. “It was so hard to say no to people, because we’d have to close the dining room and our regular customers would get upset.”

On the other side of a dividing wall in the dining room is a new bar area that can seat up to 12 patrons. Aside from the row of stools along the bar, there are tables and a wall-mounted TV provides entertainment.

“We’ve been in business 86 years,” DeSimone said. “We have a very good following. We have a great name and reputation and now we’re building a bar business with regulars coming two or three times a week. They’re always sitting at the bar watching the game.”

Jennie’s hosts a happy hour Tuesday through Friday from 3:30 to 6 p.m. with its own menu and drink specials. 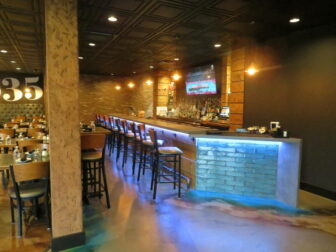 A new bar off Jennie’s dining room has already attracted a loyal following.

On Tuesday, Aug. 17, Jennie’s is offering a dinner special, in which patrons can choose between an appetizer of fried mozzarella, arancini rice balls or a stuffed clam, an entree of any style chicken on the menu, and a dessert of either chocolate mousse, mini cannolis or rice pudding for $20.

Wednesday, Aug. 18, will feature the same appetizer and dessert options, but the entree will be a build your own pasta — excluding Sunday Sauce — for $16.

On Thursday, Aug. 19, the special will feature an entree of any style shrimp, with the exception of Shrimp Lucy, for $24.

Though this week is the official grand opening of the dining room, a ribbon cutting ceremony was held last month, with First Selectman Ken Kellogg doing the honors.

“We love the area. We support the town and the town is very supportive of us,” DeSimone said.

Jennie’s donates to many organizations in town. The restaurant has been a sponsor of Masuk High School’s prom and post prom since relocating to town from Bridgeport in 1998. It sponsors two-to-three Little League Baseball teams a year, gives discounts to youth sports teams, and still makes food donations to the Bridgeport Rescue Mission.

DeSimone said he recently saw kids having a carwash fundraiser across the street. “I told them to bring the kids over for a pizza lunch after,” he said.

Since opening the new dining room over a month ago, Jennie’s has been quickly booking dinner reservations and events.

“We’re very excited about it,” DeSimone said of the new dining room. “It came out beautiful. We’re getting a very good response. We’re working out the kinks you have with any new venture. We’re almost there.”