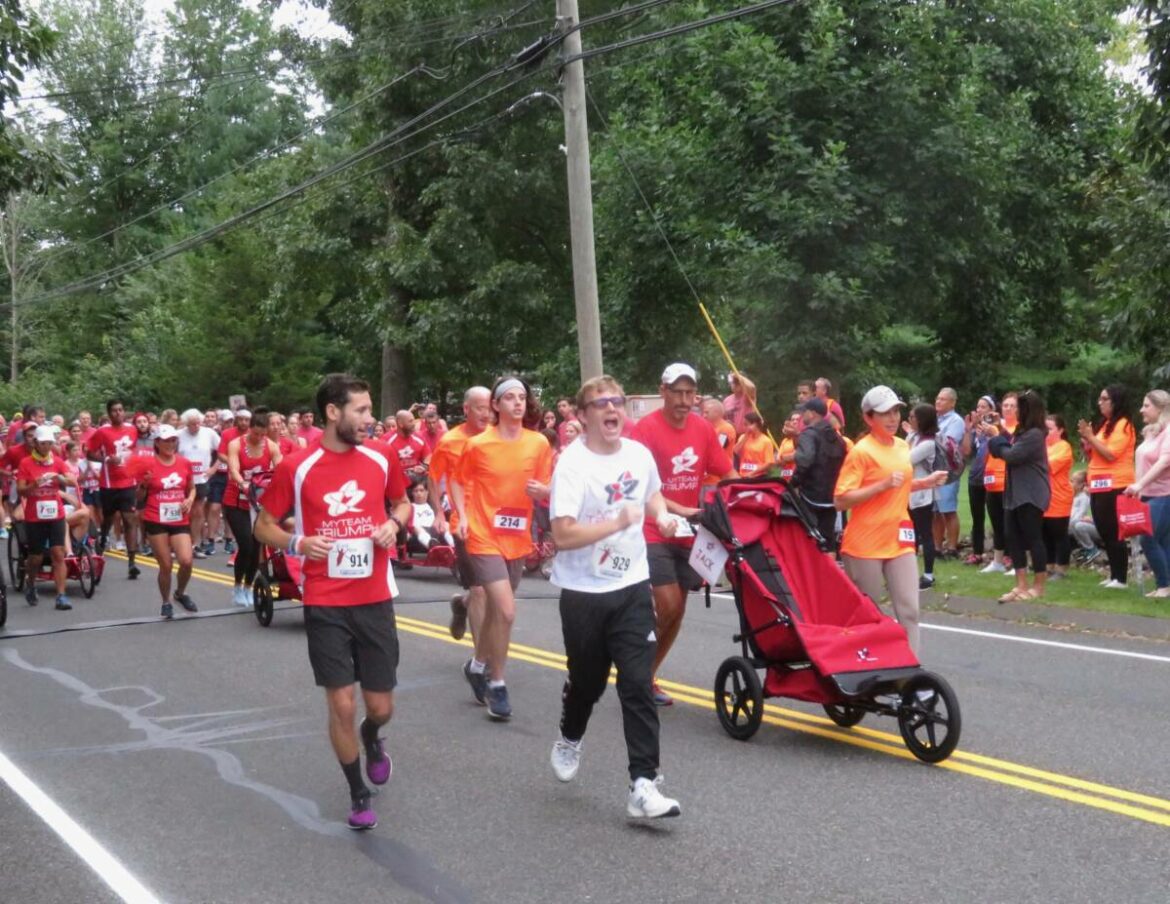 Dr. Adam Pearl pushes an empty wheelchair at the start of the Sprint for Monroe 5K Sunday, in honor of the late Jack Crowell.

MONROE, CT — A moment of silence was observed before the start of the Sprint for Monroe at Wolfe Park Sunday morning, in honor of Jack Crowell and his mother, Connie, two mainstays of the event who died tragically last year.

Dr. Adam Pearl, an ear, nose and throat specialist with a practice in Trumbull, who befriended the Crowells when he was Jack’s physician, led the short ceremony. 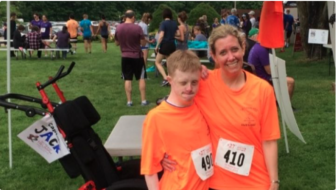 Jack Crowell, 22, left, and his mother, Connie, had always looked forward to the annual Sprint for Monroe race.

“The first time I met him and Connie, their kindness, the gentleness in their hearts was very special,” Dr. Pearl said, adding of Jack, “he had some special needs, as many people know, and who he was as a person went well beyond that. He faced and overcame his challenges of life all the time as a champion. In addition to one of his physicians, I also became one of his friends.”

For years, Jack and his mother cheered people on from the sidelines. Then Dr. Pearl and Jack joined My Team Triumph, a national organization pairing special needs athletes with volunteers, who push their wheelchairs, while participating in races together.

The special needs athletes are the team captains and the volunteers are the angels, who help them cross the finish line. Sprint for Monroe was Jack’s first race and he teamed up with Dr. Pearl, as his angel, for 5Ks and a triathlon.

“Two years ago, Jack was in a chair,” Dr. Pearl told the crowd Sunday. “He was the first and only Team Triumph member. This year, there are 10 captains. Next year, we hope to have more.”

My Team Triumph members wore red and lined up in front of the runners at the starting line on Cutlers Farm Road. 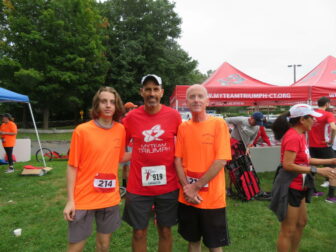 Lucas Crowell, left, with, Dr. Adam Pearl, center, and his father, Patrick Crowell, at the Sprint for Monroe at Wolfe Park Sunday.

Dr. Pearl ran, while pushing an empty wheelchair in Jack’s honor, with Jack’s father, Patrick Crowell, and brother, Lucas Crowell, a Masuk senior, running behind him.

“As you cross the finish line today, I want you to think of Connie and Jack, especially Jack and his hug,” Dr. Pearl said. “If you’ve been lucky enough to receive a hug, you know what I’m talking about. We’d always say a Team Triumph event was not complete, unless you got a hug from Jack. He’d reach around, grab hard, and he had a signature tap of his hand on your back. I can still feel it today. It gives me goose bumps.”

“It was an honor,” Patrick Crowell said after the race. “It was special to see him commemorated like that. It was nice to see people come together for a cause.”

Lucas Crowell said his late brother would have loved the ceremony. “He loves the crowd,” he said of Jack. “He loves to feed off the energy of other people.”

“I think it was very special, what Dr. Pearl did today,” Patrick said. “I’m grateful.”

My Team Triumph, which has a Connecticut chapter, “promotes health, teamwork, and community, and requires the involvement of many people with diverse abilities and disabilities,” according to the nonprofit’s website.

On Sunday, Dr. Pearl encouraged people to go to a red My Team Triumph tent set up on park grounds to become a volunteer. For information, visit the organization’s website.