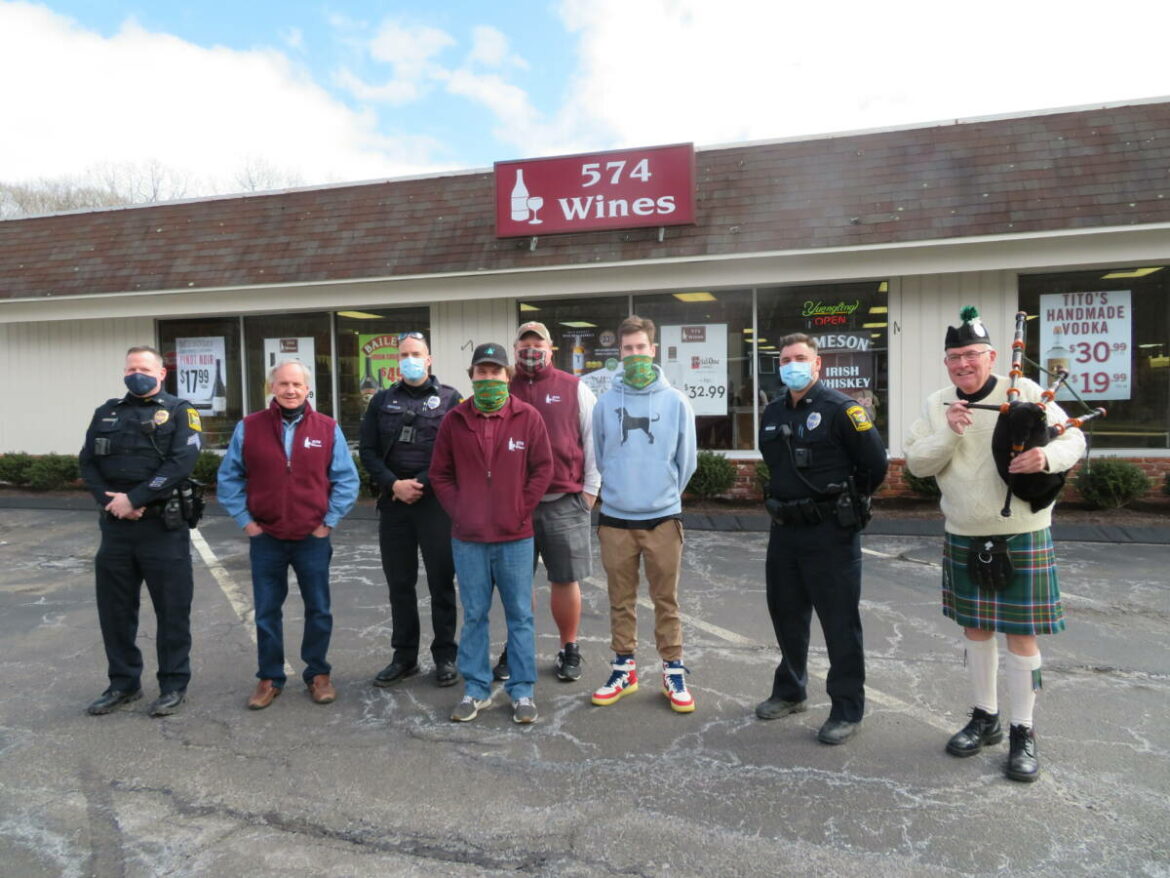 MONROE, CT — A bagpiper performed in front of 574 Wines and Spirits Saturday, when Monroe Chamber of Commerce President Ray Giovanni and town police officers were among the guests for the store’s one year anniversary celebration.

The officers were on hand to show their gratitude for the 574 Monroe Turnpike business’s donation to their fundraising efforts for Special Olympics CT. Between noon and 6 p.m., 10 percent of the store’s proceeds were donated to the cause.

The COVID-19 pandemic had delayed an official welcome to town last year, so the event also doubled as 574 Wines’ grand opening.

“Phenomenal” was how store manager, Ty Nicholson, described year one. “We’ve set goals and expectations and we’re over it,” he said.

“Since we’ve only been in business during a pandemic, I’m really touched by the support and acceptance of the townspeople,” said Scott Overbeck, the building manager. “It was such a rush job getting the C.O. Over the course of the last 12 months, it’s starting to feel like we’re part of the community.”

Patrick J. Maguire, a bagpiper with Celtic Cross Pipes and Drums of Danbury, played music outside the store, beckoning drivers from Monroe Turnpike to pull into the parking lot.

Robert “Bailey” Stewart has owned the property on Route 111 since it was Walter Stewart’s Market from 1986 to 1995. Then he leased it to the Goodwill store, before it flourished there and moved to a larger location.

After a package store permit became available, 574 Wines opened on the property on March 6, 2020. 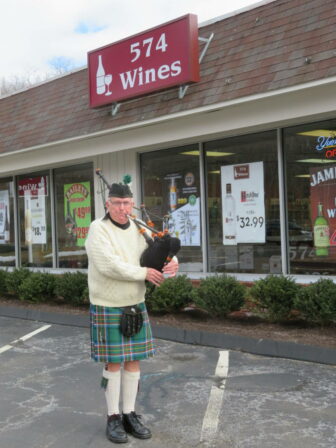 Howard said Monroe police officers have been doing the Torch Run for Special Olympics CT for 27 years and have held several fundraisers over the past 25 to raise money for the event, including the Plunge at the Park, Tip-A-Cop and Cop-on-Top.

Last year, Howard rappelled down the 34-story Mohegan Sun building in Uncasville in a fundraising event called Over the Edge.

Police from area towns have a friendly competition raising funds for Special Olympics CT and Monroe’s officers always do well.

“We were third highest last year and we’re usually in the top 10,” Howard said.

The Plunge and events like Tip-A-Cop were canceled due to the pandemic last year, so 574 Wines’ donation will be a boost for Monroe’s officers current efforts.

“They reached out to us,” Howard said. “We appreciate any business that will help us fundraise for Connecticut’s Special Olympics.”

Though police officers fundraise for the event, Howard said raising awareness is their primary goal.

“We’re so proud of this store and how it’s been restructured from what it was, not only internally but externally,” Giovanni said of the curb appeal. “This is such a great enhancement to our town. It’s such a beautiful store. It’s always well stocked with a variety of spirits and they’re very professional. Congratulations to Ty and his team.”

The retail space is approximately 8,000-square-feet and the racks are filled with bottles of cabernets, merlots, pinot grigios, chardonnays, zinfandels and other varieties. Along the side walls other spirits are on display. There is ample space for coolers, including a walk-in cooler filled with craft beers, known as “the beer cave.”

“We’re even more proud that a CBD store will be opening soon that has so many remedies for people who need relief,” said Giovanni, who is also chairman of the Monroe Economic Development Commission. 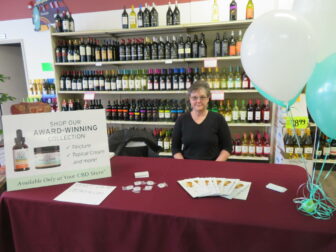 Joanne Fox will be manager of Your CBD Store, which will soon open in back of 574 Wines at 574 Monroe Turnpike.

On Saturday, Joanne Fox, who will be manager of Your CBD Store, sat at a display table adorned with balloons and pamphlets on the new store, which will open in back of the building.

Rachael Quinn, who has been living with Crohn’s disease for many years, founded Your CBD Store to share her desire to help others through the use of natural, hemp-derived products. There are over 450 locations in the U.S. and the United Kingdom.

Jed Stewart, the son of Bailey Stewart, said an effort is underway to make the building more energy efficient and safer for customers and staff during the pandemic.

Fernando De Andrade of Monroe, owner of Mountainside Construction in Oxford, is the general contractor who was hired to renovate the interior of the building for 574 Wines and Your CBD Store.

The retail floor for the liquor store is large enough to allow the aisles to be placed six feet apart and an air purifier was set up in the CBD store.

All of the lighting was switched to LED with LED USA. Aside from being good for the environment, Jed Stewart said, “we anticipate energy savings that will pay for itself in 20 months.”

They are also in the process of switching the building from propane to natural gas.