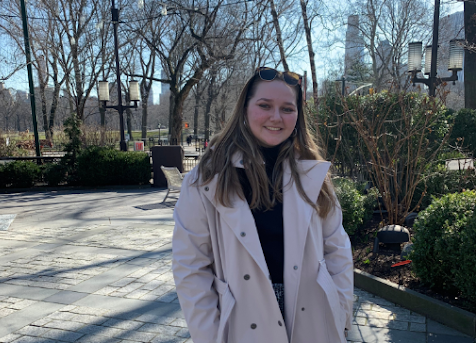 Hayley Baron is a senior at Masuk High School. Contributed

Hayley Baron is a senior at Masuk High School, who has been chosen as a Weller Scholarship finalist. The following is her OpEd on how only reading one news source can influence one’s understanding of current events:

Fake News. It’s a term that has risen in popularity over the past few years popularized by President Trump in the 2016 Election campaign and throughout his time in office. But what exactly is fake news? Is it a news story that is blatantly false? A story that we don’t like and subsequently dismiss? Or is it a true story that the media manipulates to fit their own narrative? I believe that fake news can be characterized as all three and it is important for us, as citizens, to be educated enough to not be fooled.

How can you discern between what is true and false when it comes to a news story or headline? Practice lateral reading. The New York Times explains that lateral reading “encourages readers who come to an unfamiliar website to refrain from exploring the site more deeply until they have opened other tabs and found other websites to help them determine the authenticity or reliability of the newly discovered site.” Essentially, lateral reading is seeking out information about your source before you read its content to confirm that the information you encounter will be accurate.

Sometimes, even though a story is true, people will go to great lengths to ignore the content as it does not align with their values or beliefs. In this instance, it is important to seek out multiple news sources to learn the full story before you make any judgment.

Oftentimes, it is media bias that contributes to what gets labeled as “fake news”. Different outlets take the same story and frame it differently for their like-minded audience, creating an echo-chamber of ideas. People in this bubble only hear opinions that are similar to their own and dismiss the arguments of the other side. I believe that this is one of the main contributing factors to the political division and strife within our country.

This disparity in reporting was especially visible throughout the impeachment of President Donald Trump. The conservative Fox News characterized impeachment as the Democrats grasping at straws for any way to remove President Trump from office. The liberal CNN emphasized President Trump’s wrongdoings to justify the legitimacy of the impeachment process. The more neutral BBC took perspectives from both the left and right for their coverage of the President’s impeachment.

Bias is visible in the headlines from each website. Consider headlines about US Ambassador to Ukraine William Taylor’s testimony in front of the House of Representatives about the withholding of aid to Ukraine on November 13, 2019.

Fox News reported, “Day one of public impeachment hearings puts pressure on moderate Dems.” By focusing on the uncertainty of a few moderate Democrats, it called the credibility of impeachment into question.

CNN’s headline read, “New revelations from first public hearings paint damning portrait of Trump.” This headline did the exact opposite of Fox News’ because it directly placed the blame on President Trump and necessitated impeachment.

The BBC reported, “Impeachment: How an overheard phone call could damage Trump.” This headline appeared to be a fair mix of both perspectives because the use of the word “could” asserted that it was possible that the evidence presented could implicate President Trump further, but it was not a foregone conclusion as CNN depicted it to be.

Of course, bias was also significantly seen in the content of these articles. After President Trump was impeached in the House of Representatives, each news outlet put their own spin on the story.

On December 18, Fox News’ Mike McCaul wrote an opinion piece about President Trump’s impeachment. He wrote, “History will judge Democrats for their rush to impeach President Trump without direct evidence, in defiance of historic precedent and as a one-sided political probe.” This once again dismissed impeachment as a political tool used by the Democrats to unjustifiably remove President Trump from office.

On this same date, CNN reported, “Rep. John Lewis, the Georgia Democrat and Civil Rights icon gave a stirring speech in which he said history will remember this moment and lawmakers need to vote with that view in mind.” While this took a similar approach to Fox News’ coverage of the story, CNN instead placed the blame on the Republican party for not doing what they saw as morally right.

In their coverage of this story, the BBC actually addressed the differing perspectives from both sides of the aisle: “The framers of the Constitution with its impeachment provision could have never imagined the hyper-partisanship- on both sides- that has been witnessed during today’s sterile house proceedings. Each side with its own narrative, neither side listening to the other.” I think this is a perfect summary not only of the reporting on the impeachment, but for the media as a whole.

Each source tells their own story to a specific demographic of readers which contributes to the intense political climate. To rise above these manipulation tactics, it is important to practice lateral reading and to be open to reading multiple sources to make sure that you are getting the full story. Framer of the Constitution James Madison said it best: “A popular Government, without popular information, or the means of acquiring it, is but a Prologue to a Farce or a Tragedy; or perhaps both. Knowledge will forever govern ignorance. And a people who mean to be their own Governors, must arm themselves with the power which knowledge gives.” As news itself becomes more politicized, it is still just as important to arm ourselves with knowledge to battle the spread of fake news.