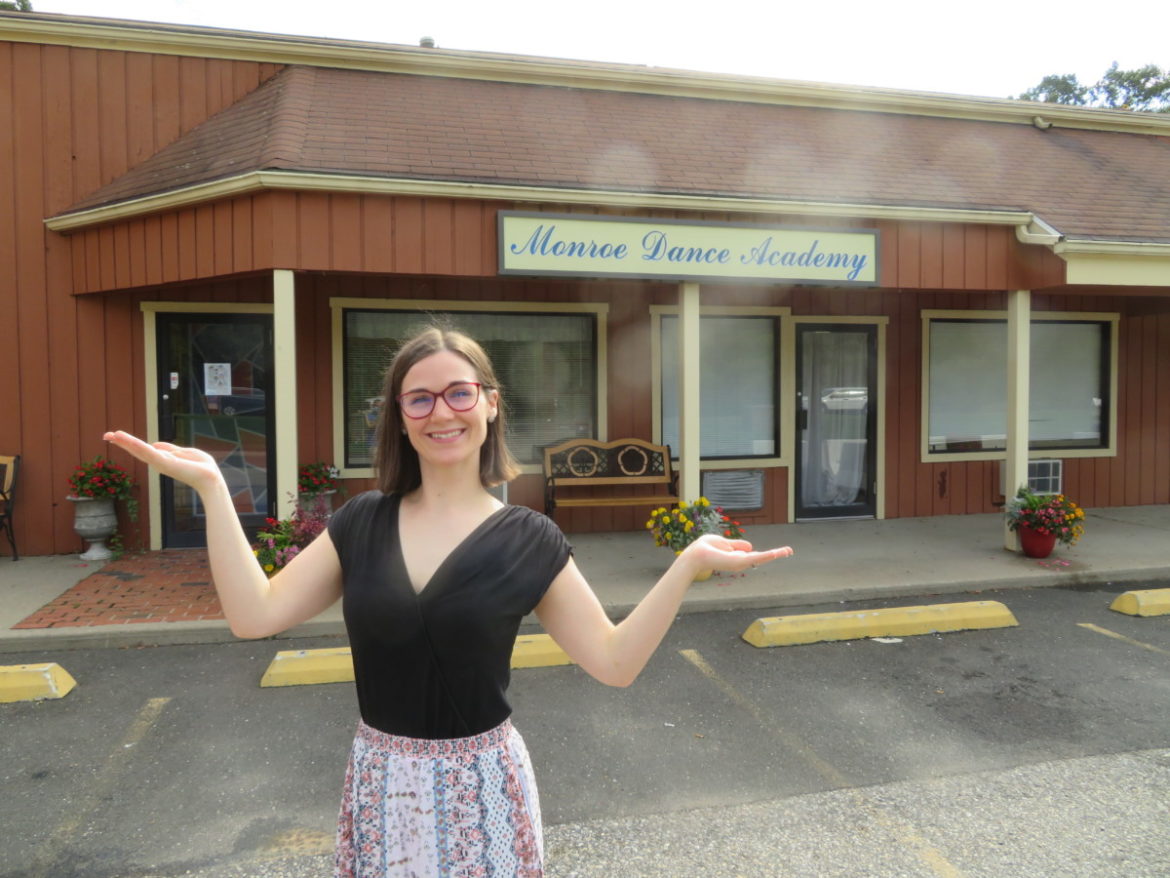 Jayme Wappel, a professional dancer and choreographer, is the new owner of the Monroe Dance Academy at Tollgate Plaza.

MONROE, CT — Jayme Wappel is a professional dancer whose specialty is as a Swing & Dance Captain, an understudy for the ensemble who coaches dancers on all of a show’s routines, and steps in herself whenever a cast member is unable to perform once the curtain rises.

So when Judy Abbatiello and Tammy Socci decided to retire as owners of Monroe Dance Academy after over 35 years, Wappel felt well prepared to assume her new role as owner of the business at 838 Main St.

“I just felt it was the right time,” said Wappel, who had taught at the academy for two-and-a-half years when Abbatiello and Socci approached her about taking over the business in May.

While running Monroe Dance Academy, Abbatiello and Socci were active in the community, having their academy students perform shows at town events and choreographing dance routines for Two Planks Theater Company, which instills a love of the arts in children.

“They really built a family,” Wappel said. “We have students who are second generation. One student’s mom trained with Judy when she was a child.”

A life in the arts

Wappel, who lives in Milford with her husband Clancy, grew up in Raleigh, North Carolina.

“I started dancing when I was four or five years old,” she said. “Living room dance parties weren’t cutting it after a while. My mom was like, ‘she’s ready to go to dance.'”

A passion for the performing arts is in Wappel’s blood.

Wappel’s father, Steve, was a stage manager when he met her mother, Kathy, while working at a dinner theater she was performing at. And Wappel said her brother, David, is involved in film and screenwriting.

Her parents were on the First National Tour of the Broadway musical “Barnum” together, according to Wappel.

When she took drama at Cardinal Gibbons High School, Wappel said she choreographed dance routines for the musical “Oklahoma.”

“It was there that I fell in love with musical theater,” she said. “I’m still close with our theater department head at the high school.”

After graduating from high school, Wappel enrolled at Point Park University in Pittsburgh, an accredited institutional member of the National Association of Schools of Dance, which gives its students intense training in ballet, jazz and modern dance.

Before deciding to major in dance, Wappel said she considered careers in marine biology and physical therapy. She said her parents would have supported her in any decision she made.

“I had a lot of awesome cheerleaders in my life,” she said. “It takes a village. My husband jokingly says he’s my stage husband. He’s my biggest cheerleader for sure.”

Her first professional job was at the Tuacahn Center for the Arts in Utah, where she was a member of the ensemble. Wappel went on to serve as the Swing & Dance Captain for “Finding Neverland” and “Guys & Dolls”  at Goodspeed Opera House in East Haddam.

Understudies simply fill in for the lead when needed, but Wappel did not do that. As a Swing, she served as the understudy of up-to-10 other cast members at once.

Wappel said she loves training other dancers in her role as Swing & Dance Captain.

“There’s nothing like watching someone you worked with on opening night of their debut,” she said. “I feel like such a proud mama bear.”

“There is nothing like working with a student on some skill, whether it’s a turn or a leap, and seeing the look on their face when they get it,” Wappel said with a smile.

In some shows, Wappel said she has worked with professionals whose strength was singing, rather than dancing. She would tell them, “I’m here for you. We’ll work on it. You’re going to be amazing.”

Coloring outside the lines

Of dancing, Wappel said, “I do love the structure that it gives you, but then when you add your own artistry it’s like coloring outside the lines. You pick the colors and shades. You’re the one who gets to make it unique and relatable. I like telling a story, because everyone can relate to that. You want to try to relate to every single person in the audience.”

Wappel has taught in Connecticut, New York and New Jersey. When she was on the First National tour of “Finding Neverland” she said she taught master classes in some of the cities.

“I taught and choreographed for the Mayo Performing Arts Center in Morristown, New Jersey,” she said.

Wappel is also the program director for the American Dance Training Camp. “I communicate with the parents, mentor the staff and develop a great program for the kids, so I really think that helped prepare me for this role,” she said of taking over Monroe Dance Academy.

Monroe Dance Academy is teaching in-person classes with social distancing. Students are also wearing face masks and having their temperatures taken before entering the building.

“We have hand sanitizer stations everywhere, lots of safety measures to keep everyone healthy and safe,” Wappel said.

Monroe Dance Academy teaches students ranging from two-and-a-half years old to adults. Registration started last Monday and the year will end in June of 2021 with a gala performance, giving dancers the opportunity to show everything they learned through their hard work.

“They all wear sparkly costumes and it’s fun,” Wappel said.

The academy offers 45-minute and one hour classes on evenings Monday through Friday and on Saturdays from 8 a.m. until noon. Monroe Dance Academy has three studios and is taught by Wappel and her six instructors.

“What we do in this studio is more than just dance,” she said. “We’re trying to build young people into good human beings. You learn discipline, hard work and build friendships. I’m still really good friends with people from dance school growing up. They were at my wedding.”

“It’s about community, creating that environment where they can feel safe and comfortable and thrive,” she continued.

Wappel looks forward to seeing her students’ “aha moments,” when she can praise them for “that small win that is going to lead to something bigger.”

For information on Monroe Dance Academy or to register for classes, call 203-268-1200 or visit its website by clicking here.